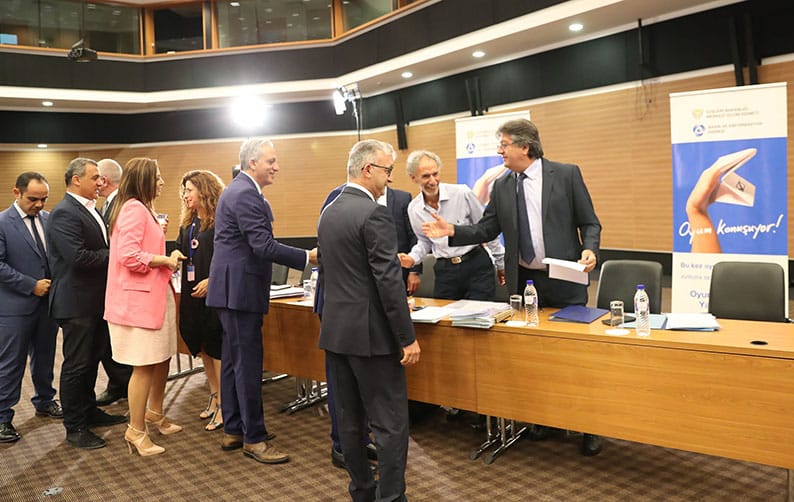 Political parties and movements on Friday submitted their candidacies for the European Parliament elections at the Philoxenia Conference Centre in Nicosia between 9am and 12 noon with a combined total of 74 candidates from 17 groups and independents.

In a statement after the filing, party leader Averof Neophytou said his party was keeping up its tradition of putting forward “the best team” and called on voters to support the party’s efforts to strengthen the country in the EU by voting Disy.

Akel candidates were next up, led in by party leader Andros Kyprianou and candidates, Georgios K Giorgiou, Giorgos Chrysanthos, Niyazi Kızılyürek Giorgos Koukoumas, Marina Nicolaou and Neoclis Sylikiotis who is a current MEP for the party.

Kyprianou said the party was proud of the work its MEPs had done in the preceding period and urged voters to “resist the forces that violate social freedoms and the forces that bring Europe back into the interwar period”.

“The stakes for Europe are high in these elections,” he said, and the same applies to Cyprus where there are phenomena of mismanagement and it’s time to say so here. Send the message to the government.”

“It is very important for us socialists that Cyprus should be able to be represented in the second largest political group of the European Parliament in order to become stronger,” party leader Marinos Sizopoulos. “We ask the citizens with a sense of responsibility to move forward and support Edek at the ballot.

Party leader Nicolas Papadopoulos said after the submission: “We are choosing a more democratic Europe on May 26 and we are sending a message about the mistakes and omissions of the government, and so we ask the citizens to vote for us,” he said.

The Afrika daily’s publisher and journalist, Levent, said that they are not running as Turkish Cypriots but as Cypriots, citizens of the Republic of Cyprus, “who condemn the Turkish occupation”.

Elam leader Christos Christou said: “On May 26 Cypriot Hellenism will decide who its representatives will be in the European Parliament. Our candidacy is different as they are the people who undertake to represent the nationalist movement in Europe which will form a major political group of which Elam will be a member.”

According to the latest poll, main opposition Akel appears to be closing the gap on ruling Disy, while nationalists Elam could overtake socialists Edek to become the fourth largest party in Cyprus.

Conducted around the time of the release of the report documenting the demise of the co-op bank – which pundits say reflects badly on the Disy-led administration – the poll discerned a higher interest among the public to vote compared to the 2014 European Parliament elections.

The survey, disseminated to political parties and to the media, found that public engagement was comparable to the 2018 presidential elections in Cyprus.

The findings indicate that Disy is haemorrhaging supporters to Elam; as many as 5 per cent of Disy fans could end up turning to the nationalist party.

Unlike Disy, Akel does not appear to be experiencing leakage. Of those respondents who identified as traditional Akel supporters, 70 per cent said they were sure to vote for the party.

Akel came in second place with 21 per cent, trailing Disy at 24 per cent.

Meanwhile Diko was clinging to third spot, at about 8 per cent. At the same time, the newly formed party known as the Democratic Front – comprising Diko dissidents who broke away – should garner around 2 per cent, though nowhere enough to elect a MEP this time.

As for Edek, its slide continues, with the poll finding only 3.1 per cent will vote for it. At the same time, Elam is projected to garner 4.5 per cent, supplanting Edek as the fourth largest party.

Should Edek lose its one seat in the European Parliament, this could pose a leadership problem for Marinos Sizopoulos.

Elsewhere the Greens and the Citizens Coalition, running on a common ticket, are expected to gain about 2 per cent.

Assuming this coalition does relatively well in the upcoming ballot, commentators say these two parties could formally merge in the aftermath.

In the 2014 elections, Disy and Akel elected two MEPs each, Diko one MEP, and a coalition of Edek and the Greens one MEP.