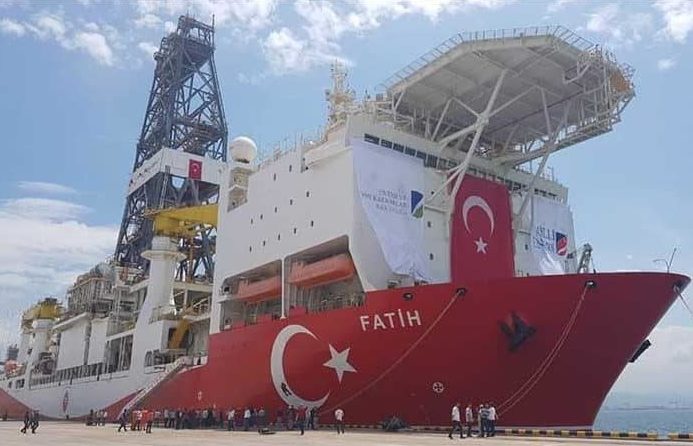 A longer-term Plan B is called for to resolve the dispute over maritime zones, but to date Nicosia appears to be content with improvising.

“It is important, with strong international help, to find a way to achieve a longer-term resolution of these problems, including the Cyprus problem. It is not sufficient to just get strong international support – Turkey will not be deterred by this,” says energy analyst Charles Ellinas.

On May 3, Turkish authorities issued a Navtex (navigational telex) advising that the drillship Fatih would be carrying out ‘drilling operations’ in an area west of Paphos from May 3 to September 3.

The Turkish drillship, accompanied by three support vessels, is currently located almost 40 nautical miles west of the Akamas peninsula and 83 nautical miles from the Turkish coast. The area falls within the EEZ and continental shelf of Cyprus.

Cyprus put on a poker face, with officials insisting they were not caught off guard. Foreign Minister Nikos Christodoulides pushed out the somewhat unpersuasive argument that the government’s swift response – submitting to the United Nations on the very next day the coordinates for the northern (undelineated) part of its EEZ – proved that Nicosia had been monitoring the situation and was on top of things.

But even the seeking of international arrest warrants for the crews of the Turkish vessels – a straightforward action – turned sour. On Monday officials stated the applications for arrest warrants were to be filed to a court on the same day. By Tuesday the story changed, the government saying it would take a few more days while they identified the individuals concerned.

At the time of writing, it’s understood the government had yet to file the applications. At any rate, this step is seen as a deterrent more than anything else – a warning to third-country nationals not to participate in unlawful operations in Cypriot waters in the future.

Cyprus is forced to go the way of international arrest warrants because Turkey is not a signatory to the United Nations Convention on the Law of the Sea (Unclos) of 1982 which delineates a nation’s maritime EEZ and rights. Seeking arbitration with an international body is thus not feasible – particularly given that Turkey does not recognise the Republic of Cyprus in the first place.

According to Zenonas Tziarras, a researcher with the Prio Cyprus Centre, the long-expected arrival of Turkey’s drillship has four fundamental aims.

It seeks to question Cyprus’ right to have a continental shelf and EEZ – Turkey’s traditional argument that goes against Unclos. It is also to practically support and project its claim that the Turkish continental shelf extends up to and partly overlaps with Cypriot blocks 1, 4, 5, 6, and 7, and all the way to Kastelorizo and Crete.

Increasing the geopolitical risk in the area and thus challenging the viability of the Republic of Cyprus’ energy programme is another aim, as is to push for the prospect of co-exploitation and co-management of natural resources with Cyprus and Greece, respectively.

Ellinas warns of the need for a longer-term plan – to achieve a comprehensive solution to the issues: Cyprus problem and EEZ disputes.

“Strong US and EU support, and support by other East Med and friendly countries, is very useful, but I do not believe it is enough to stop Turkey’s actions.”

He cited other challenging issues, such as the S-400 missile system, as examples of how Turkey appeared to be determined to go its own way irrespective of international reaction.

It was perhaps little surprise that Turkey did not bat an eye after the European Union’s display of solidarity to Cyprus. On Thursday, at the informal European Council summit in Romania, Europeans went through the motions, with Council President Donald Tusk saying the EU “stands united behind Cyprus and expects Turkey to respect the sovereign rights of EU member states”.

No specific measures on countering Turkey’s actions were announced at this time.

For Nicosia, the need to think bigger stems from Turkey’s upping the ante in the eastern Mediterranean.

“Turkey has made claims and threats in the past, but now it is acting on them,” Ellinas stresses.

“There may be a number of reasons why now, but key among these is Turkey creating a fait accompli in support of its claims in the East Med, forcing the issue and putting Greece on the defensive – having to react rather than lead. It could also be related to President Erdogan attempting to deflect Turkish public opinion away from the internal problems he is facing in Turkey.”

Whatever the reasons, Ellinas adds, it is a massive provocation that can destabilise the region.

“By doing this, Turkey is trying to enforce its own interpretation of what constitutes its exclusive economic zone and what it defines as its ‘legal rights’ in the East Med, ignoring Unclos – this claim is independent of the Cyprus problem. Cyprus is using all means available to it to respond to this, but may be unable to stop it.”

What’s more, Nicosia should be thinking ahead in this chess game. Turkey may choose to up the stakes by following up with drilling in areas it lays claim to within Cyprus’ declared EEZ.

And what of the drillship? Is its presence intended to merely rattle Cypriot nerves, or does Turkey intend to conduct actual drilling? And does Turkey possess the know-how?

According to Ellinas, their rig is modern and capable of drilling at the water depths around the East Med. It can drill to a maximum depth of 12,000 metres.

“Cyprus should not get complacent about this – the assumption should be that the Fatih can perform drilling as planned, with possibilities of a gas discovery.”

He said that while Turkey’s previous drilling at the Alanya-1 target in the eastern part of Antalya Bay did not come up with any findings, the drillship was able, at least according to Turkish sources, to drill to up to 5500 metres deep.

“This means the Fatih could theoretically drill at the location west of Paphos as well, regardless of the outcome,” he said.

But Tziarras contends that Turkey’s main objective at this point is not to discover natural gas but to exercise continental shelf-related sovereign rights in an area that is not yet delimited and falls within the coordinates of Cyprus’ continental shelf and prospective EEZ.

“It is possible that the Fatih will stay there until the expiration of Turkey’s Navtex in September. It is also likely that by then, Turkey will be able to prep its second drillship,” he says.

“If necessary measures are not taken or do not succeed in preventing Turkey, the next target could be somewhere [else] within the Cypriot EEZ – either by the Fatih or the second drillship, the Yavuz (Deepsea Metro 1) – in a block that is either not licensed yet or is licensed to ENI, which as demonstrated in February 2018 cannot react effectively to such a scenario.”

In February last year, a drillship belonging to energy giant ENI on its way to a drill site in Block 3 of Cyprus’ EEZ was harassed by Turkish warships and prevented from carrying out any drilling.

Our View: Message over the EEZ incursion we don’t want to hear

Global road safety week has just finished – did we notice?