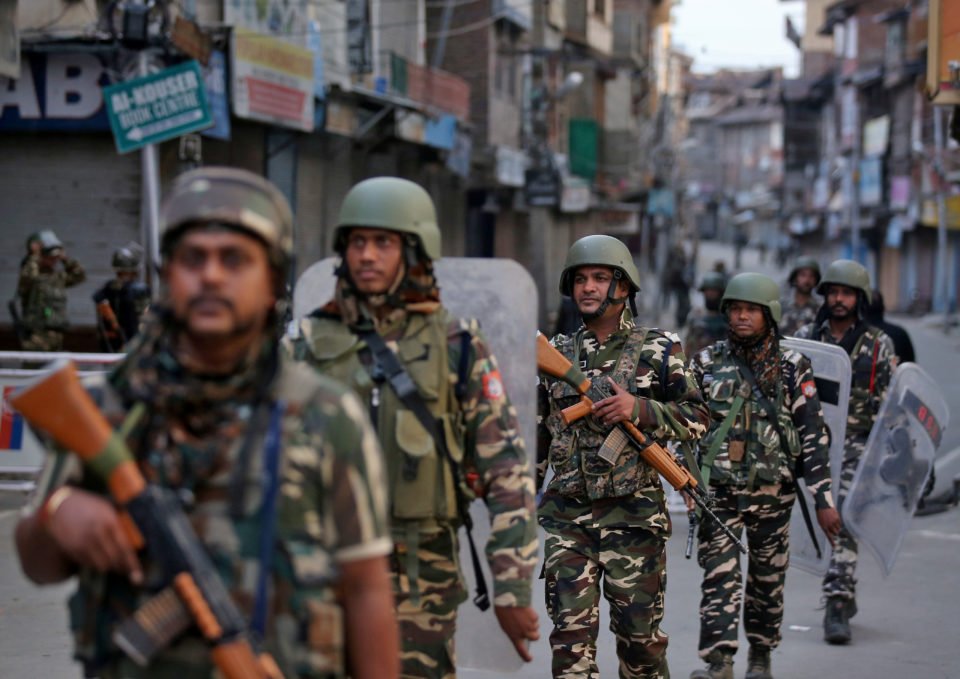 Indian security forces personnel patrol a deserted street during restrictions after the government scrapped special status for Kashmir, in Srinagar

God knows what novelist VS Naipaul really meant half a century ago when he called India ‘the wounded civilisation’ in his travelogue-cum-psychoanalysis book about the home of his ancestors. But it is a handy phrase, because it encapsulates the vision that drove Prime Minister Narendra Modi to destroy the deal that bound Kashmir to India on Monday.

There is going to be a war over this. Certainly another war in Kashmir, where tens of thousands of people were killed in the last uprising against Indian rule (1989-2007). Maybe also another war between India and Pakistan. There have been three already, of course, so maybe that’s not such a big deal – but this would be their first war since they both got nuclear weapons.

When Britain gave up its Indian empire in 1947 the general rule was that Muslim-majority areas went to Pakistan, Hindu-majority areas to India. Kashmir was tricky, however, because it was a ‘princely state’ with a Muslim majority but a Hindu ruler – and in the princely states, which were never under direct British rule, it was the prince who decided.

The Maharajah of Jammu and Kashmir (to give the state its full name) hesitated for a while, hoping to turn it into his own independent country. When the new government of Pakistan lost patience and sent ‘tribesmen’ into Kashmir to overthrow him, he quickly opted for India instead – and set in motion a conflict that is still going 72 years later.

India should probably have cut a deal with Pakistan that divided the state, giving Kashmir (current population 7 million, almost all Muslims) to Pakistan and keeping Jammu (current pop. 5 million, two-thirds Hindu) for itself. Instead, it tried to keep it all – and wound up in a war with Pakistan.

At the end of that war, India still held the densely populated Vale of Kashmir and Jammu, but Pakistan controlled the northern and western parts of the former princely state. The ‘Line of Control’ has not shifted since, despite two further Indo-Pakistani wars, and there is no mutually agreed border. Bill Clinton once called the cease-fire line “the most dangerous place in the world”.

The Congress Party that led India to independence was militantly secular, but it realised that the country’s only Muslim-majority state must have a special status. Jammu and Kashmir accepted India’s control over foreign affairs, defence and communications, but the J&K legislature kept its authority over everything else.

That included laws forbidding people not born in Jammu and Kashmir to settle in the state or own property there. Fair enough, as the relatively poor Muslim majority in the state feared being bought out or overwhelmed by Hindu incomers from the rest of India, which is 80 per cent Hindu and now one-and-a-third billion strong.

Various Indian central governments nibbled away at Jammu and Kashmir’s autonomy over the years, and there were periods of armed protest against the erosion of its status. But the state remained legally autonomous, its rights entrenched in the Indian constitution – until last Monday. Then Narendra Modi’s sectarian Hindu government, fresh from its landslide May election victory, swept them all away.

Modi obviously knows he’s asking for trouble. Ten thousand more Indian troops were moved into Kashmir (where there is already a huge military presence) in the past week. On Monday phone lines in Kashmir were cut, the internet was shut down, and elected Kashmiri leaders were arrested. New Delhi expects at least another uprising in Kashmir, and maybe another war with Pakistan. Why is Modi doing this?

Because the notion of the ‘wounded civilisation’ is at the heart of the Hindu nationalism that has brought Modi to power. According to this simplistic narrative, all of India’s past misfortunes and current problems are due to the fact that the Indian subcontinent (‘South Asia’) was conquered and ruled by foreigners for most of the past thousand years.

For the most recent couple of centuries it was the British empire, but at least the British went home again. For many centuries before that it was Muslims – foreign invaders at first, and then their Indian-born Muslim descendants and converts – who ruled most of the subcontinent. And they never went home: one-third of South Asia’s population, including 15 per cent of India’s, is Muslim today.

Every nationalist movement lays claim to victimhood, and for aggrieved Hindu nationalists a Muslim-majority Indian state with special rights is a permanent insult. Abolishing those rights was one of Modi’s main election promises, and he is now delivering on it. Even if the heavens fall.

They probably won’t. The Kashmiri insurgency will certainly reignite, and Pakistan will feel obliged to help the uprising in some way. Some thousands, or more likely some tens of thousands, will die, and Kashmir will be an occupied war zone for a long time to come, but India and Pakistan will probably manage to veer away from all-out war once again.

But maybe they won’t, in which case we will all find out how well mutual nuclear deterrence works between two countries that are actually fighting a war.

A very special home for bees