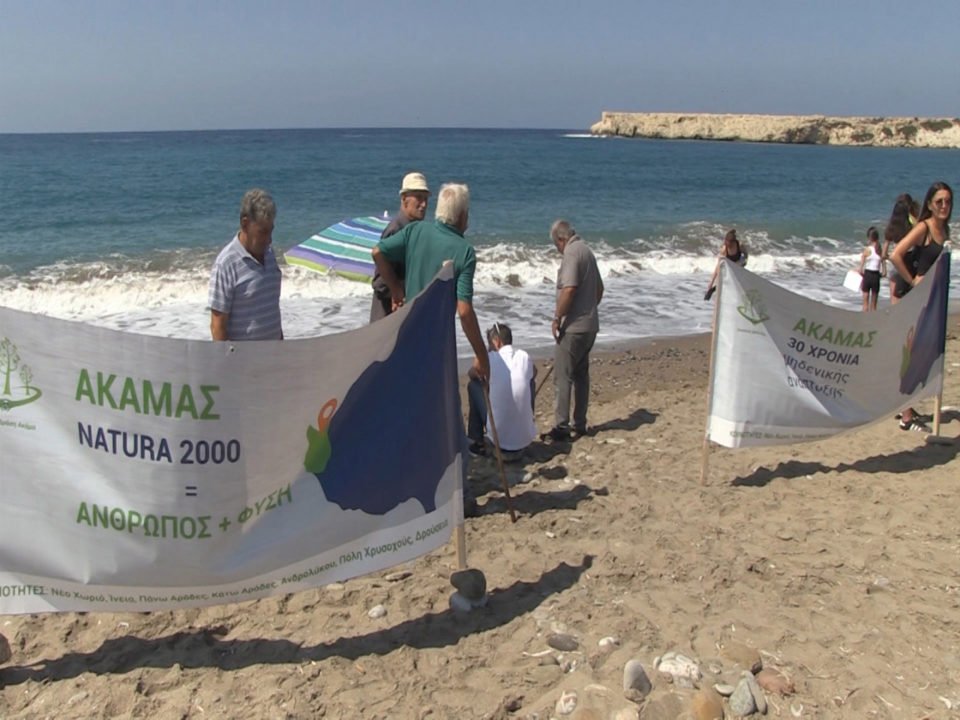 Inia village residents and landowners in the area of Akamas, with the support of local authorities, staged a peaceful protest rally on Sunday on the beach of Lara, which has been a protected turtle conservation station since 1971

Protesters gathered on the beach and placed umbrellas, contravening the existing legislation that prohibits it. A strong police force was present on site, with a patrol boat monitoring the protest from the sea, while a police helicopter was flying over the area.

According to the organisers, the protesters’ aim was to send a clear message regarding the development of their properties and businesses, while still protecting the area.
Inia community leader Yiangos Tsivikos proposed to reserve the northern coastal area exclusively for the turtles, but to allow umbrellas to be placed on the southern coast.

Moreover, he suggested to build toilets, changing rooms, and a small café in the area that would be destined for tourism.

“Turtles give birth everywhere,” he said, adding that it was unfair that Lara beach was being so strictly controlled by the department of fisheries and is the only beach on Cyprus where the law is actually applied against umbrellas and sunbeds.

As Inia residents on Sunday protested the decision of closing Lara beach to tourism, members of the Animal Party also gathered at nearby Toxeftra beach, a few kilometres from Lara, demanding that no decision be taken which would endanger the protected turtle species.

Animal Party leader Kyriacos Kyriacou was appalled by the decision of the police present on Lara beach to not intervene and fine the protesters with sunbeds and umbrellas.

“It’s unbelievable,” told Cyprus Mail on Monday. “We organised our peaceful protest on Toxeftra beach specifically not to step on the turtles’ nest. Clearly not everyone respected that, including Disy MP Costas Constantinuou, who, in front of the police and contravening the rules, went to protest on Lara beach.”
Kyriacou reiterated that the beach should be left completely free of tourism.

“The Akamas peninsula is protected by the EU. Therefore, infrastructures cannot be built there.

“Turtles are not pets, they cannot cohabit with people, even if they are 200 metres away, like Tsivikos suggested. They need complete isolation in order to prosper.”

The Animal Party approved a petition to be sent to the government and to animal protection organisations in Europe, and will also send one of their representatives to a conference on animal rights to be held in Porto on September 9 to fully explain the situation on Akamas and on Lara beach to EU MEPs who will attend.

Kontides: a great mental win before the Olympic Games