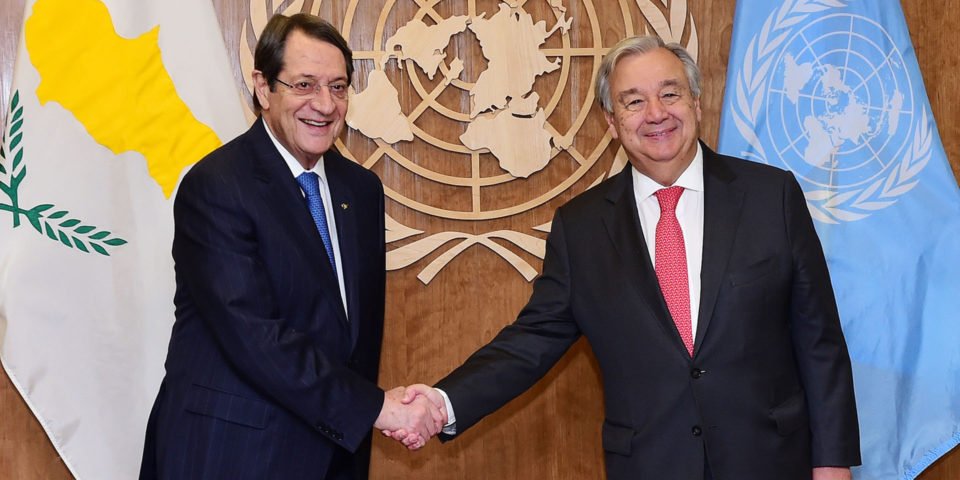 PRESIDENT Nicos Anastasiades on Friday did not rule out either a tripartite meeting on Cyprus with the UN chief, nor a five-party meeting with the guarantor powers, a day after a fiery speech at the General Assembly in New York saying Greek Cypriots would not negotiate under duress.

The possibility of a three-party meeting between the island’s two leaders and UN Secretary-General Antonio Guterres could be on the cards shortly, Anastasiades said after a meeting with the UN chief on the sidelines of the General Assembly.

Turkish Cypriot leader Mustafa Akinci is due to meet Guterres on Monday.

“It seems that a tripartite meeting is on the horizon,” Anastasiades said, adding that his meeting with Guterres had been “very productive”.

He said he informed Guterres about the Greek Cypriot side’s positions, and their readiness to agree on the terms of reference, which are based on the joint statement of February 11, 2014, the convergences  that were achieved up to the conference on Cyprus in Crans-Montana in 2017, and the framework set out by Guterres himself on June 30 during the same conference.

“I am ready to hold a tripartite meeting at any moment, to find a way to agree or to at least restore the understanding there was on August 9 and after Ms Lute’s arrival [in Cyprus],” the president said.

Anastasiades was referring to Guterres’ envoy Jane Holl Lute who spent six days on the island in early September trying to facilitate the leaders to agree terms of reference for new talks. She left without managing to succeed in the endeavor.

Following his meeting with Guterres, Anastasiades thanked the Secretary-General for his interest in working with the various sides and creating the conditions for a tripartite meeting.  The president said that if there was a positive conclusion to a potential tripartite, there could be room to hold an unofficial five-party meeting with the guarantor powers.

This was something Turkey has been asking for as a means to moving forward. The five-party meeting would be held to discuss the external aspects of the Cyprus problem, and agree on their content, Anastasiades said, echoing Turkish Foreign Minister Mevlut Cavusoglu.

Earlier in the week, Cavusoglu was asked why Turkey was asking that a five-party meeting with the two sides and the guarantor powers take place first.

In response, Cavusoglu referred to discussions he had last year with Anastasiades, who spoke of possible solutions involving a confederation and two states, noting that certain things still require clarification. The President denies making any such suggestions.

Asked when the Secretary-General would set the meeting between the two sides and himself, Anastasiades said Guterres would have to decide, and it would be sometime in October, either in New York or a European city.

He did not immediately comment on the Varosha issue and the potential of bringing it up to the UN Security Council and was due to hold a news conference at 3am Cyprus time (7.30pm in New York).

Later in the day, the president met with the ambassadors of the UN Security Council permanent members, to inform them about his meeting with Guterres, the issues in the exclusive economic zone and Turkey’s actions, as well as, the Varosha issue.

Earlier, one of Turkey’s two drillships in the eastern Mediterranean completed operations in Karpas Turkish Energy Minister Fatih Donmez said. He said the Yavuz, is currently in port in Mersin and will depart for a new location in coming weeks. The second ship, Fatih, is continuing operations west of Cyprus, Donmez said.

From cake to quiche