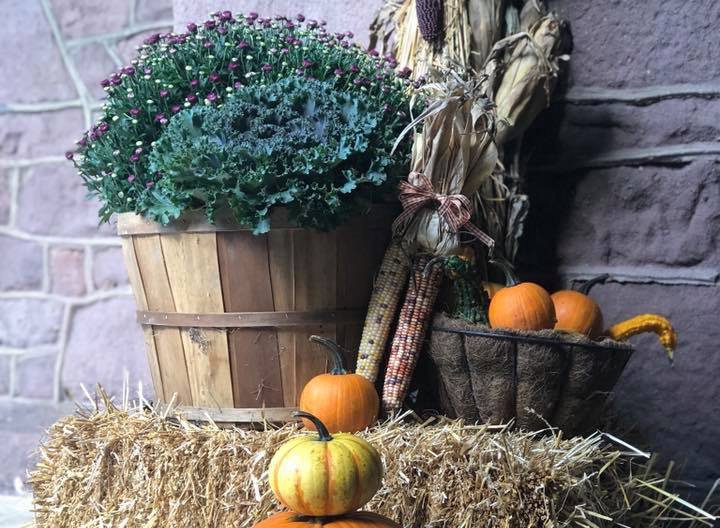 We humans are strange creatures – we long for hot weather, but when it comes we can’t wait for it to be cool again. What are we to do if as the pundits predict we will have even hotter summers in the future? It is already very hot from late April until October so how will the trees, shrubs and plants recover if we don’t have a cooling off period? While I applaud the decision to plant thousands of trees here to help combat global warming, I do hope that those in charge give due consideration as to where and what to plant.

I think that sometimes people, even experts, forget that trees grow not only upwards but outwards, and when their roots are confined in small squares such as pavements, they have nowhere to go except upwards. This results in paving stones being lifted. The benefit of planting trees is widely known and they can absorb as much as 48 pounds of carbon dioxide from the air each year, and in turn release oxygen into the atmosphere.

So, the thought of tree laden streets full of burgeoning blossoms in our villages and towns is wonderful, but consideration needs to be given during this time of replanting from now until March, where they will be of most benefit.

It is officially autumn – the season of mists and mellow fruitfulness, when the trees blaze across the land in fiery colours. Here we don’t have quite such a show – mostly pyracantha berries and that awful vine, which looks like a bunch of old sticks for most of the year and then bursts into colour for a few weeks – Virginia Creeper. Its botanical name, Parthenocissus quinquefolia comes from the Greek, meaning Virgin Ivy and the descriptive second name just means five leaves. It’s excellent for covering an uninteresting wall, but loses all its lovely red leaves soon afterwards.

Our autumn weather in Cyprus is still warm in relative terms and there is little likelihood of frost, unless you live in the mountains. Prunus and pecan trees begin to shed their now golden leaves and unless there are storms and heavy rain they will remain on the trees for a little while yet. Prunus trees do really need a cold spell to recover from the heat and produce new flower buds and leaves for next season. Remove those heavy seed pods of Caesalpinia gilliesii as their weight could snap the brittle branches and remember to pick any pecan nuts before the crows gets to them! They always know when the nuts are ready before we do!

The garden centres will be full of potted chrysanthemums (known as pot mums) in their bright autumnal colours from now. They will grow well in pots or you can transfer them into the garden after they have finished flowering, having first removed the dead flower heads. 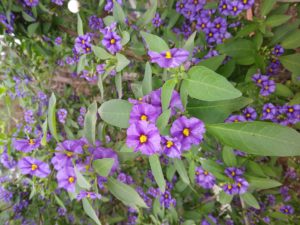 October for me is the start of the gardening year here, after the heat of the summer, when a lot of plants have been resting. There is a weather window in which to take cuttings of plants and because the compost is still warm, they will make roots very quickly. It is far easier to keep new cuttings going through our winter than wait for the spring, when the young plants will have to endure a hot summer and probably quickly demise. Rosemary is the quickest plant I know to make roots and you could have some nice plantlets in a few weeks. We have several rosemary hedges from our own cuttings and they are quite effective in keeping the neighbourhood cats out of the garden. The Blue Potato Vine is another plant that propagates easily from green cuttings, by that I mean that the stem is still green and soft. Hardwood cuttings take longer to make roots. If you want to take cactus and succulent cuttings you need to cut them off the mother plant and let them lie for a few days to let the cut end callous over and then plant them in a dryish compost. You can sow seeds of shrubs or trees now and perennial plants, which should get a good start. If your soil remains warm then you could also sow annual seeds, but only around the coastal areas, otherwise wait until spring. Annuals already in the garden will have broadcast their seeds and they may start to emerge, probably next month after any rain.

If you like to grow winter veggies, then this is the time to start. Make sure that your veggie beds are dug over and include any home-made compost. I expect that you have been adding to your compost heaps all summer, so the compost should be maturing nicely and not smelly. You could also use animal manure if you can find a friendly farmer or shepherd. Before you plant anything at all, make sure that the soil is damp – those welcome showers last month should help here. Choose your veggie plugs with care – don’t buy those that have dried up on the garden centre benches or are very leggy. Select compact plugs even if they are on the small side. If you like to grow broad beans soak them overnight and plant them out in the beds directly or into small pots. Remember to leave a good space between the rows, as they will quickly grow and may need staking later on.

It’s a good idea to severely cut back the stems on pelargoniums now, as they have flowered all summer long and could do with a rest. Bring them in under cover to do that and remove any debris that has collected on the top of the soil. Either scoop off any loose soil and add in new or you can re-pot them in fresh compost with a slow release fertiliser, like ‘Multicote’ added in the mix. Generally speaking, pelargoniums live outside and need a slightly loamy soil, as peaty soils crust and cannot let the water through.

Start to trim bushes and hedges as new growth appears and split any over-large herbaceous plants (those that come up every year) getting rid of any dying bits in the centre. This way you always have the freshest part of the plant around. While you do this, also take off any dried stems which may injure you during the winter.

Plant your chosen bulbs now in pots or in the garden. Daffodils can be left in from year to year, although if they fail to flower if may be that they are too crowded or they weren’t fed after they had flowered last season. Sometimes the bulbs appear above the soil during the year because the soil gets washed away, so either cover them up or better still lift them gently and replant them lower down in the soil, but do it now. Hyacinths are big bulbs and the white outer case denotes a white flower. Blue flowered hyacinths have a reddish bulb, as do some of the pink ones. There is nothing quite like hyacinths for that sensuous perfume in the springtime. A general guide for planting small bulbs like cyclamen or anemones is about 3-5cm deep; muscari and crocus 8cm and large bulbs such as narcissus and tulips round about 10-16cm depending on the height of the bulb. Plant in groups for effect. 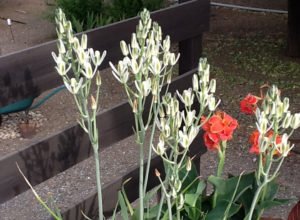 Plant of the Month: Albuca nelsonii

These interesting bulbous plants in the Asparagaceae family, originally came from Natal and Eastern Cape of South Africa and were first collected by William Nelson, the famous plant collector in the late 1800s. Grown there between 30-70 metres elevation, sometimes in grassland or on cliff faces, they will grow in gardens certainly as high as 300 metres in Cyprus. Albuca is an excellent plant, (commonly known as Nelson’s Slime Lily or Candelabra Lily) for any difficult shade areas, as well as any dry areas under trees among matted roots.

They are not often found growing in gardens, but they are such good unusual plants they would enhance anyone’s spring garden. Usually bought as potted plants here, these huge bulbs quickly outgrow their pots, producing in excess of 12 flowering stalks in each group. The bulbs like to be partly exposed above ground, rather like amaryllis, and are not at all fussy about the type of soil. The clumps, thriving on neglect, can reach around a meter in height with tall flower stems of attractive, scented, green-striped white flowers appearing in April or May, although the leaves tend to flop and look untidy. In pots they should be planted in a good compost and will grow in full sun, but can become pot bound very quickly, which is when they should be transferred into the ground.

Turkey protests after U.S. Embassy ‘likes’ tweet about Bahceli, ‘apology will not suffice’