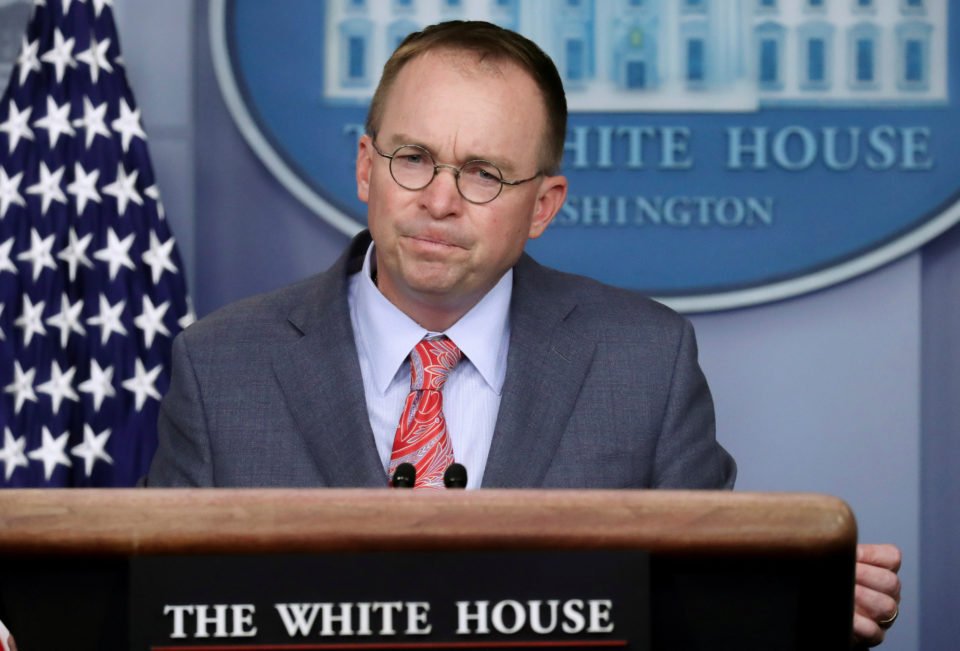 President Donald Trump’s withholding of $391 million in military aid to Ukraine was linked to his request that the Ukrainians look into a claim – debunked as a conspiracy theory – about the 2016 US election, a senior presidential aide said on Thursday, the first time the White House acknowledged such a connection.

Trump and administration officials had denied for weeks that they had demanded a “quid pro quo” – a Latin phrase meaning a favour for a favour – for delivering the US aid, a key part of a controversy that has triggered an impeachment inquiry in the House of Representatives against the Republican president.

But Mick Mulvaney, acting White House chief of staff, acknowledged in a briefing with reporters that the US aid – already approved by Congress – was held up partly over Trump’s concerns about a Democratic National Committee (DNC) computer server alleged to be in Ukraine.

“I have news for everybody: Get over it. There is going to be political influence in foreign policy,” Mulvaney said.

He later contradicted himself, ruling out a quid pro quo in a statement from the White House.

In a July 25 call, Trump asked Ukrainian President Volodymyr Zelenskiy for “a favour” to look into the server as well as the California-based cybersecurity firm CrowdStrike, which was hired by the DNC in 2016 to investigate hacking of Democratic emails that it later determined was done by Russia.

Trump also asked Zelenskiy to investigate a domestic political opponent, Joe Biden, and Biden’s son Hunter Biden, who had served as a director for a Ukrainian energy company. Zelenskiy agreed during the call to carry out the investigation that Trump sought. The US aid was later provided to Ukraine.

The DNC server issue is a discredited claim that Ukraine and not Russia interfered in the 2016 U.S. election and that a Democratic Party computer server was being held somewhere in Ukraine. US intelligence agencies and a special counsel investigation concluded that Russia used a campaign of hacking and propaganda to boost Trump’s 2016 candidacy.

Biden is a leading contender for the Democratic nomination to face Trump in the 2020 presidential election.

Mulvaney said Trump did not like foreign aid, thought Ukraine was corrupt and was annoyed at how little “lethal aid” European nations provided to Ukraine as it combated Russia-backed separatists in the eastern part of the country.

“Did he also mention to me in the past, the corruption related to the DNC server? Absolutely. No question,” Mulvaney said, referring to Trump. “But that’s it. That’s why we held up the money.”

“The look-back to what happened in 2016 certainly was part of the things that he was worried about in corruption in that nation,” Mulvaney said, referring to Trump.

A reporter told Mulvaney that what he just described was a quid pro quo. “We do that all the time with foreign policy,” Mulvaney responded.

In his later statement, Mulvaney offered a different account, saying: “There was absolutely no quid pro quo.”

“There never was any condition on the flow of the aid related to the matter of the DNC server,” Mulvaney said.

Trump said he had a lot of confidence in Mulvaney.

Representative Gerald Connolly said: “I guess having failed at discrediting the facts of this case, they’ve decided on a new tactic, which is to admit them and basically say: ‘So what’?

“The answer to that is, well the ‘so what’ is you’re going to be impeached because that’s abuse of office. And extortion, the last time I checked, is still a crime,” he said.

Mulvaney’s comments came after the US ambassador to the European Union said in written testimony in the impeachment inquiry that Trump told senior US officials to talk directly to his personal lawyer, Rudy Giuliani, about US policy in Ukraine, raising concern that the president was outsourcing American foreign policy to a private citizen.

The envoy, Gordon Sondland, told lawmakers in the Democratic-led inquiry that he did not understand “until much later” that Giuliani’s agenda included a push for Ukraine to investigate Biden.

His testimony was the clearest sign yet that Trump’s efforts to erect a firewall around the White House and frustrate the Democratic-led inquiry’s efforts to interview administration officials are proving unsuccessful.

More testimony is expected next week, including from a top Pentagon official who oversees policy on Ukraine, two sources told Reuters on Thursday.

In prepared testimony, Sondland said he and two other officials – Energy Secretary Rick Perry and Ukraine Special Envoy Kurt Volker – were disappointed in Trump’s May order, but they followed it anyway. Sondland said he felt foreign policy should be the work of the State Department, not the president’s personal lawyer.

Trump said on Thursday that Perry would step down as energy secretary by the end of the year, adding he had known for months that Perry would resign. The former Texas governor said previously he had no plans to resign. He faces a Friday deadline to turn over documents in the impeachment probe.

Sondland, a Republican Trump political donor and a wealthy Oregon hotelier before being named by the president to his EU post last year, also said that “inviting a foreign government to undertake investigations for the purpose of influencing an upcoming US election would be wrong.”

His testimony underscored the pivotal role of Giuliani in the Ukraine scandal. Before the president’s July call with Ukraine‘s president, Giuliani had been working to persuade Ukraine to investigate the Bidens.

The impeachment inquiry could lead to the House passing formal charges – known as articles of impeachment – which would prompt a trial in the Senate on whether to remove Trump from office. The Senate is controlled by Trump’s fellow Republicans, who have shown little inclination toward removing him.

Sondland said that on May 23, three days after Zelenskiy’s inauguration, US officials who had attended debriefed Trump and key aides at the White House.

The ambassador said the officials taking part in the meeting emphasized the strategic importance of Ukraine and the importance of the relationship with Zelenskiy, whom he called a reformer planning to fight corruption.

“We asked the White House to arrange a working phone call from President Trump and a working Oval Office visit. However, President Trump was skeptical that Ukraine was serious about reforms and anti-corruption, and he directed those of us present at the meeting to talk to Mr Giuliani, his personal attorney, about his concerns,” he added.

“It was apparent to all of us that the key to changing the president’s mind on Ukraine was Mr Giuliani,” he said.

During his White House briefing, Mulvaney acknowledged that Trump had directed officials to work with Giuliani on Ukraine, and defended the move as proper. Mulvaney denied that there was a “shadow foreign policy” on Ukraine led by Giuliani.

Giuliani did not immediately respond to a request for comment on Sondland’s testimony.

Sondland is the latest witness to speak to lawmakers in the impeachment inquiry about his knowledge of efforts by the president to urge Ukraine to investigate Biden as lawmakers investigate whether Trump committed any “high crimes and misdemeanors.” Trump withheld the military aid to Ukraine before making the request.

“Please know that I would not have recommended that Mr Giuliani or any private citizen be involved in these foreign policy matters,” Sondland said.

While he expressed misgivings in his testimony about Giuliani’s role, other witnesses have described Sondland as being among a trio of senior US officials who were considered more reliable than career diplomats in pressing Ukraine to launch investigations that might help Trump’s re-election bid.

Trump has accused the Bidens of corruption related to Ukraine, without offering evidence. The Bidens have denied any wrongdoing.

Sondland said he did not fully appreciate in late May what Giuliani’s intentions were regarding Ukraine.

“I did not understand, until much later, that Mr Giuliani’s agenda might have also included an effort to prompt the Ukrainians to investigate Vice President Biden or his son or to involve Ukrainians, directly or indirectly, in the president’s 2020 re-election campaign,” Sondland said.

One per cent of population are students in the UK