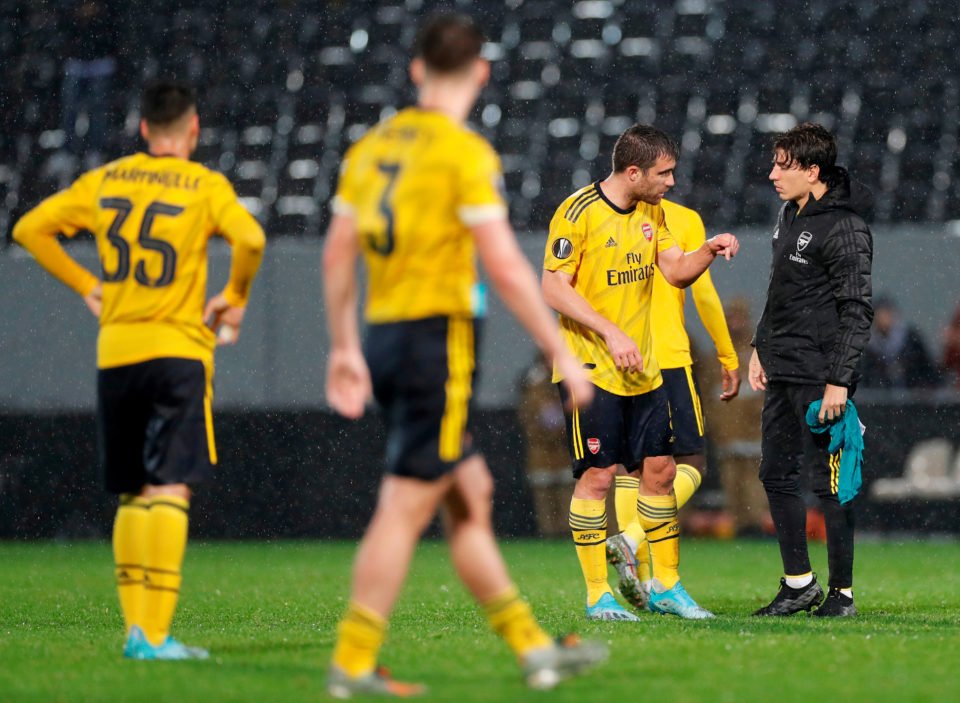 Arsenal looked to have earned victory when Shkodran Mustafi headed home with 10 minutes to go, but Bruno Duarte's overhead kick saw the game end 1-1 and ensured Arsenal have let the lead slip in their last four matches in all competitions

Arsenal conceded an added-time equaliser against Vitoria Guimaraes as they once again failed to hold on to a lead and increased the pressure on head coach Unai Emery.

Emery’s side looked to have earned an undeserved Europa League victory when Shkodran Mustafi headed home with 10 minutes to go, but Bruno Duarte’s overhead kick saw the game end 1-1 and ensured Arsenal have let the lead slip in their last four matches in all competitions.

Victory here in Guimaraes would have all-but secured progression into the knockout stages but instead Emery will come under further scrutiny.

Mustafi’s goal was Arsenal’s first effort on target of a game in which they collectively underperformed, especially in the opening 45 minutes.

A day on from Emery stripping Granit Xhaka of the captaincy it was Rob Holding who led the team out in Guimaraes, with another uninspiring team display leaving the manager animated on the touchline throughout.

The Spaniard had club-record signing Nicolas Pepe to thank for winning the reverse game a fortnight ago as he came off the bench to score a brace of free-kicks.

But Vitoria, without a point in Group F before tonight, again proved a stern test for the Gunners.

For the first time this season Emery opted to field a three-man defence, although the alteration did little to stop another busy afternoon at the back.

A 3.50pm (GMT) kick-off in front of a sparse crowd of 17,822 in the Estadio D Afonso Henriques only added to a strange spectacle, with torrential rain falling for much of a contest lacking in quality.

Arsenal were quick out of the blocks but both Pepe and Gabriel Martinelli passed up decent early chances.

That was as good as it got for some time as the hosts began to expose the weaknesses of Emery’s side, their own Pepe rattling a post with a fine effort from distance and Marcus Edwards forcing a good save out of Emiliano Martinez.

The back-up goalkeeper had to be on his toes soon after to push clear a Edmond Tapsoba header from a Pepe free-kick, with Davidson curling wide with 26 minutes on the clock as Arsenal allowed the hosts to create an abundance of scoring opportunities.

If anything, the standards in the game slipped further after the interval as Vitoria ceded possession in good positions and Arsenal continued to toil, though Mustafi headed over a Pepe corner just after the hour-mark.

Arsenal took the lead with 10 minutes remaining as Mustafi was on hand to head home Pepe’s free-kick.

But they could not hold on as Duarte’s acrobatic finish in stoppage time earned Vitoria their first point of this season’s competition.

Emery watched on solemnly as the home side celebrated wildly and it could have got worse as Mustafi was fortunate to deflect a cross inches wide of Martinez’s post before Rochinha flashed a shot off target.