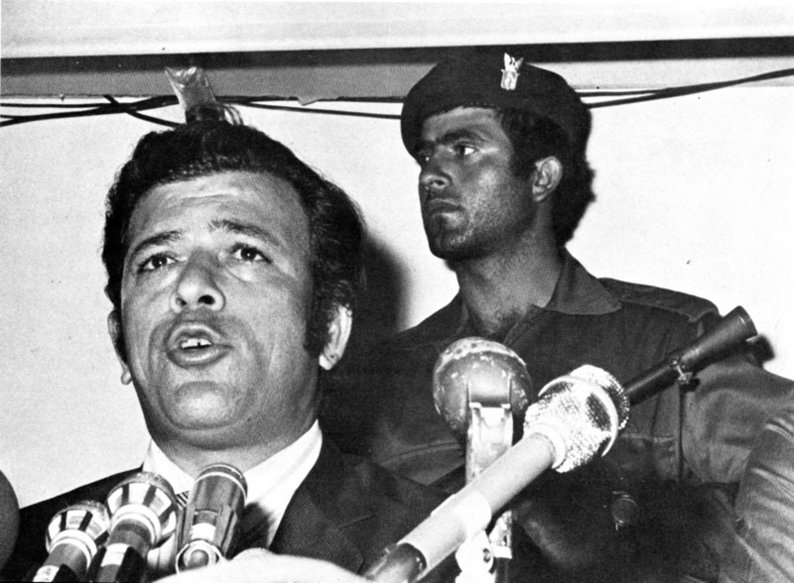 Archbishop Makarios’ speech at the UN Security Council, exactly 46 years ago, on July 19, 1974, was completed at 4.30pm New York time, which was 12.30am Cyprus time, July 20 (time difference was eight hours in those days). At the same time Turkish ships were already heading toward Pente Mili in Kyrenia where the landing vessels arrived at 4.30am local time.

Consequently, whatever was said by Makarios at the UN could never have possibly constituted the spark for the Turkish invasion. Yet the theory that “Makarios brought the Turks to Cyprus” is maintained to this day by the uninformed or the coupists and their offshoots to shift the responsibility for the Cyprus tragedy onto others.

For example, the Athens newspaper, To Vima, on 24/11/2008, in an investigative piece titled ‘Makarios, Grivas and the Cyprus tragedy’ quoted the leader of Eoka B after Grivas’ death, Giorgos Karousos, who claimed that at the UN Makarios “asked the Turks to intervene against Cyprus”. This was a blatant lie. Makarios had never asked Turkey, or another guarantor power to intervene. All he asked of the UN Security Council was to restore constitutional order. Any other comment on this aspect of the issue is unnecessary.

Some others express the view that Makarios, by claiming that what happened on July 15, 1974 was a Greek invasion and not a coup, legally justified the Turkish invasion. First, it must be made clear that what happened on that day was actually an invasion by the Junta-controlled Greece. As I have mentioned in previous articles, it would have been a coup if Cypriots overthrew the president of the Cyprus Republic. In this case, however, the president was overthrown by a foreign country, Greece. It was not a conventional invasion, given the invading country a) had troops in Cyprus (Eldyk) and b) its officers were in charge of the National Guard over which they had complete control. Therefore, on that fateful day, Greece – using Eldyk and the National Guard – overthrew the legal government and replaced it with a puppet-government. Foreign news media and government were informed about developments in Cyprus on July 15 and viewed them as an invasion, something that implied foreign intervention, which we were denying.

So when Makarios spoke about an invasion at the Security Council on 19/7/1974, he was not saying anything new. What he said was not some kind of revelation to anyone. He said: “This was clearly an invasion from outside, together with a blatant violation of the independence and sovereignty of the Republic of Cyprus. The so-called coup was the creation of the Greek officers that make up and run the National Guard.”

In other words, what he said was 100 per cent correct. As for his reference that the Greek invasion would affect all the people, including the Turkish Cypriots (that was self-evident), this did not mean that he was inviting Turkey to intervene. It should be underlined that this reference per se does not give the legal right to any country to intervene. Turkey invaded because Greece first invaded, and Turkey never officially cited Makarios’ speech to justify its invasion. How could it be any different considering Makarios in his speech made no suggestion to guarantor powers to intervene? The allegation that Makarios called Turkey to intervene is either a figment of the imagination of the naïve, or an expression of wishful thinking of the guilty or a show of rash, anti-Makarios thinking.

Undoubtedly, Makarios committed many mistakes during his political career. Perhaps, if for every mistake of his, a star appeared in the sky, a new galaxy would have been added to the universe. But on July 19, 1974, the eve of the Turkish invasion, he displayed honesty and patriotism. He nursed the hope, however slim, that through the Security Council he could rid Cyprus of the Junta’s officers, given that the members of the UN are obliged to accept and execute the decisions of the Security Council. To achieve this, he had to prove that the events of July 15 were not an uprising – that is an internal affair of Cypriots as Sampson was claiming – but an invasion. This was why he called on the Security Council to “make every possible effort, so as to put an end to the unnatural situation that was created” by the Greek invasion.

Reporting the Greek Junta to the Security Council, which as the legal head of state he was obliged to do, necessitated the reference to the Greek invasion. If Makarios said nothing so as not to upset the Junta, this would have been the dishonorable choice and not the decision to tell the truth. To castigate him because he should not have said the truth would not just be a moral humiliation but also adoption of the Junta policy that wanted to keep Cypriots in complete subservience.

How to treat a sunburn | Dr. Sandra Lee