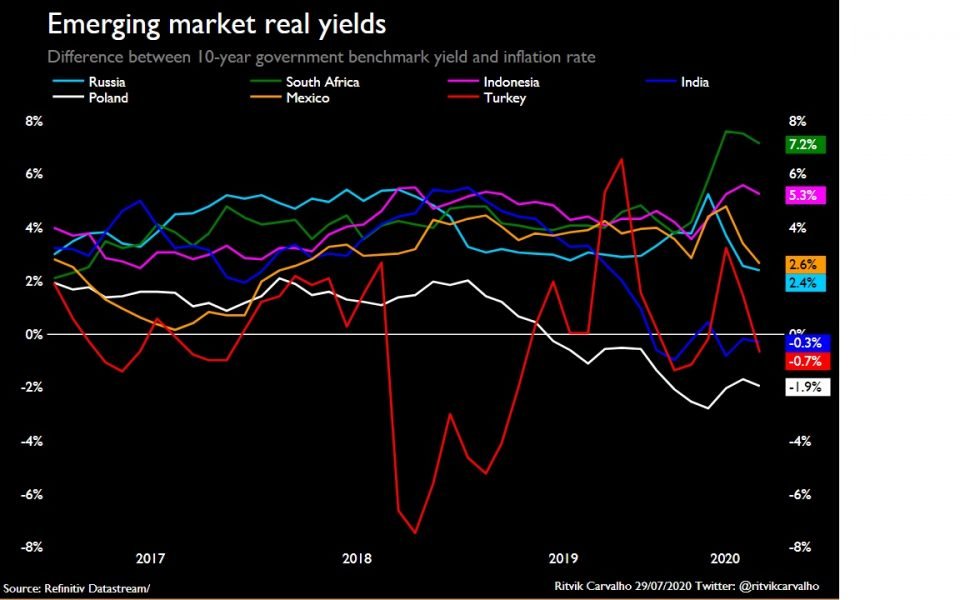 Turkey’s lira is back in the spotlight. After two months of stability, the currency is testing the 7-per-dollar threshold and tumbling to record lows versus the euro, rekindling memories of the August 2018 lira meltdown.

Speaking on Wednesday, Central Bank Governor Murat Uysal downplayed concerns about the bank’s depleted FX reserves, which he said would naturally fluctuate during a pandemic. He did not address a drop of as much as 1.8 per cent in the currency this week that could put more pressure on that buffer.

There are five issues confronting Turkey.

It takes firepower to support a currency. Just how much of that the central bank has left has come into focus.

“Given the pace of reserve burn this year, we extrapolate that the CBRT will have used all of its reported gross reserves (mostly borrowed) by late summer/early autumn,” said Cristian Maggio at TD Securities.

After the central bank halted rate cuts in June and held policy steady this month, the question is whether it will pivot back to monetary tightening, as inflation forecasts are raised.

Turkey’s economy is expected to shrink for the first time in more than a decade in 2020. The coronavirus’s effects are expected to induce a 5% contraction, according to the International Monetary Fund.

The government will post a record budget deficit of 5% of gross domestic product, S&P Global predicts.

There is some hope, however. Industrial output, while still negative, shrunk less than expected in May, and low crude prices should help the oil-importing nation.

The plunging lira complicates the task for Turkey’s government and companies of repaying hard-currency debt.

FX loans account for about 37% of the total debt owed by Turkish borrowers as of April, S&P Global estimated, citing it as a key risk for the country’s banks.

The lira has long been hostage to politics.

Tensions with Moscow over Syria, testy relations with Washington over the purchase of Russian missile systems and strains with Europe over migration and oil and gas rights near Cyprus have taken their toll.

There is now the risk of another standoff with Moscow over Libya.

Strains have been compounded by authorities exerting ever tighter control over the FX market and the government’s push for lower interest rates.

10 mistakes that shorten your pet’s life