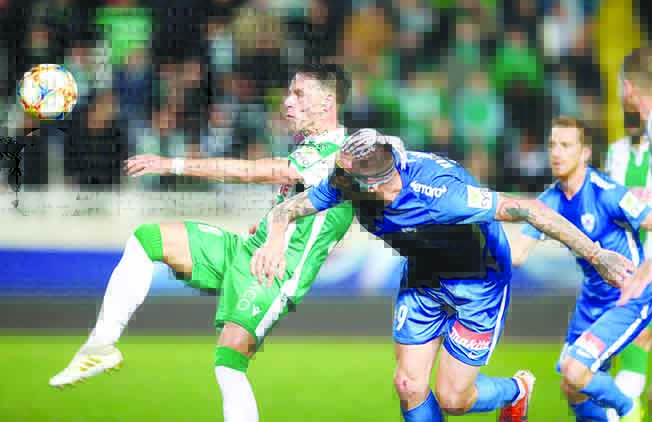 All eyes will be on the Antonis Papadopoulos stadium in Larnaca on Saturday, where the top two from last season will battle it out

All three have been scheduled for Saturday to give the teams, more specifically Anorthosis, Omonia, Apoel and Apollon, as much time as possible to prepare for their crucial midweek Champions and Europa League qualifying games.

The two teams that ‘finished’ in the top two places last season, and separated just by their head to head clashes, Anorthosis and Omonia, meet at the Antonis Papadopoulos stadium in Larnaca.

Anorthosis have won both of their opening two games and they will be looking to complete a hat-trick of wins. However, the decision to allow their main striker Nika Katcharava to be transferred in the last couple of days leaves their coach Temur Ketsbaia short of attacking options.

Greek striker Michalis Manias is expected to fill that role and it will be a huge task for the 30-year-old striker as he will be up against a defence that let in just 13 goals last season.

Omonia coach Henning Berg tried to lift some pressure off his players saying that their Champions League game against Red Star Belgrade is more crucial at this juncture, indirectly admitting that he will rest some key players against Anorthosis.

However given that Berg has all his players free of injury with the return to action of Fotis Papoulis and Andronkos Kakoullis, this makes his task a lot easier.

It will be interesting to see if Omonia striker Michal Duris will be given the chance to face his former team just a few weeks after switching sides.

Apoel, who got off to a torrid start to the season, picking up just one point from a possible six, face AEL at the GSP stadium.

The poor start led to panic buying for the Nicosia club as they have rushed to sign no less than seven players since the break. However, with just a few days before the transfer deadline ends in Cyprus, they will have to decide which three players of the 18 foreign nationals they will not register with the Cyprus Football Association and which team they can ship them off to, if at all possible.

AEL made ‘few’ additions to their squad, six in all, with the bulk of the players remaining from last season.
This has allowed their coach Ducan Kerkez to have a well-balanced and settled side, evident from their opening two games where they them both.

The last big game of weekend will take place at the Tsirion stadium with Apollon entertaining Pafos FC.
After a sluggish opener against Doxa on the opening day, Apollon bounced back with two convincing wins, against Ermis and Sampourtale in Europa League qualifying.

Apollon coach Sofronis Avgousti was pleased to see all his players back to full training and said that their two latest signings, Larson and Katelaris, were ready for the game. He warned however that “Pafos FC are a very good and fast side and we need to be at our best to win.”

Pafos were unlucky not to pick up more points from their opening two games against the two title favourites Omonia and Anorthosis and they will prove a stern test for the Limassol side.

The third team on maximum points AEK, will need to overcome the pleasant surprise of the season so far, newly-promoted Karmiotissa, without their top striker Ivan Triscovski, who picked up an injury on international duty.

In the other two games on Sunday Nea Salamina and Enosis, both without a point, will battle to secure their first points while Olympiakos are at home to Doxa Katokopias.

The final game of the round will take place on Monday between Ethnikos Achnas and Ermis Aradippou.

TikTok US could close as China opposes forced sale