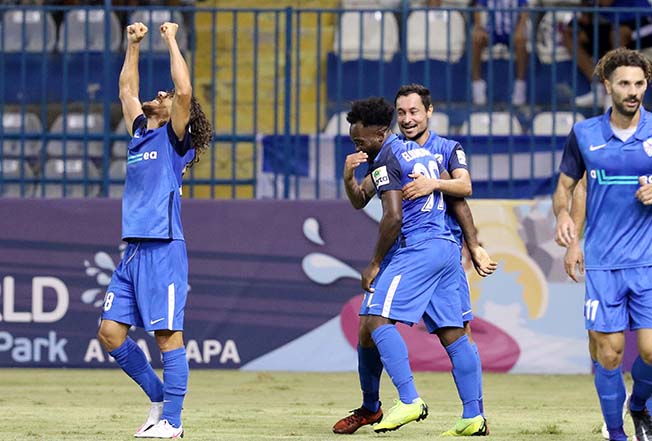 Anorthosis Famagusta face Swiss side FC Basel on Thursday night as part of the Europa League’s third qualifying round. The game is scheduled to start at 21:30 Cyprus time and will take place at St. Jakob Park stadium in Switzerland.

Anorthosis are trying to leave their weekend defeat against Apollon Limassol behind, while also trying to not be distracted by as-of-yet baseless allegations of match-fixing pertaining to the same game.

As we reported on Tuesday, the game was neither highlighted for match-fixing by UEFA, who normally notify the respective association involved, nor was there heightened or otherwise unusual betting activity, another indicator of potentially illicit actions.

In regards to FC Basel, the Swiss side are currently in sixth place in the domestic Super League with just one game played. Basel drew with newly promoted side FC Vaduz in their season opener, with the final score being a somewhat unexpected 2-2.

The Cyprus Mail has spoken to Swiss journalist Jakob Weber who works for Basel-based newspaper Basellandschaftliche Zeitung (BZ). Weber provided us with some insight into the current state of Basel, with a particular focus on matters away from the pitch.

Basel recently renewed the contract of Dutch forward Ricky van Wolfswinkel. Van Wolfswinkel was an important player for the Swiss side at one point in time, but injuries, including cranial surgery, have caused some deterioration in performance. “After his injury, he made a comeback, but not a very strong one, he would score the third or fourth goal in games, not important goals”, Weber said. The Dutchman usually plays as a second striker for the Swiss side.

On recently-appointed manager and former Bayern Munich midfielder Ciriaco Sforza, Weber offered sympathetic but realistic comments. “He is new to the club so he is trying to bring positivity, he doesn’t want off-field matters to disturb things and just wants to focus on each game, but it’s difficult to believe him”, Weber said.

However, Weber did note that Sforza has been good with developing players, so he is hoping that he can help the club in this regard. “There are a lot of young players he can develop, maybe the players can evolve under him”, Weber said.

Basel have had incredible success in Europe, featuring in the Champions League group stage for a number of years, but things have been more difficult over the past few years. “They had a budget of around 100 million when they were in the Champions League, but now they’re trying to lower it to 60 million, but it’s hard because some of these players are on high wages”, Weber said.

Weber noted that Basel have not had much of a pre-season to speak of. The club finished their previous season late, had a few days of rest, and then had to start with the new season. “It’s more like they’re in the middle of the season”, Weber commented. Sforza’s recent appointment means that the new manager has not had a great deal of time to work with the squad.

The main issue for Basel, however, has to do with the board of directors and the ownership of the club. Displeasure with the way the club is being run has sparked a campaign to oust the current president Bernhard Burgener. The campaign has seen more than 7,000 people sign a petition calling for Burgener’s removal.

Weber said that there have been “many scandals” involving the current president and owner. One of them is his relationship and management style with the coaching and administrative staff at the club. “It’s hard to work with the president, there have been issues with him and sporting directors, as well as some of the coaches”, Weber said.

Even Alex Frei, a legend of Swiss football and former Basel player, decided to vacate his role as U-21 coach and sever ties with the club. A very symbolic move indeed. Unfortunately, Weber is not optimistic about how this campaign to remove Burgener will go.

“Even if you remove him as president, he is still the owner and part of the board of directors”, Weber said. “The new president will only be one of five board members, so Burgener will still have power to run the club how he sees fit”, he concluded.

Marcia Thrasyvoulou| Trendsetter evokes simplicity without being too loud

The quiet power of introverts