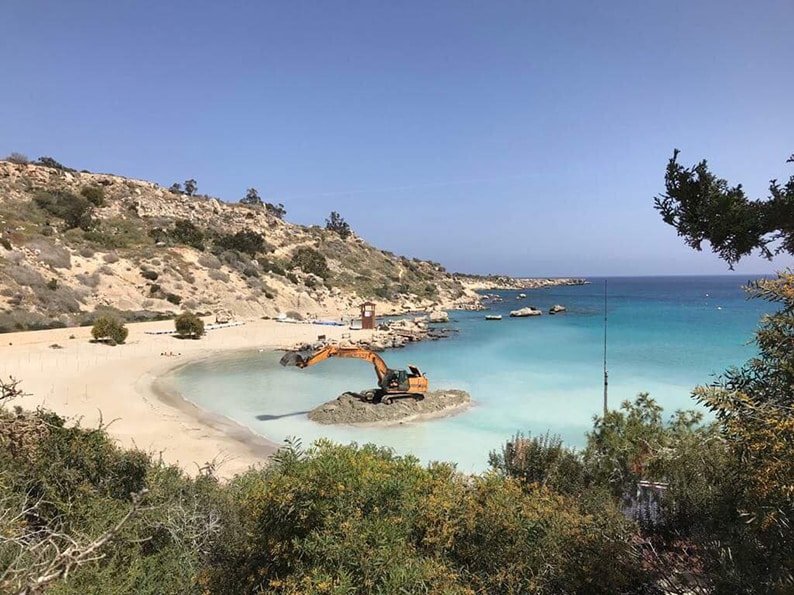 An excavator photographed at Konnos Bay this week

POLITICAL parties and conservationists on Thursday censured local authorities in the Famagusta area after a photo emerged on the internet of an excavator carrying out work at Konnos beach on a man-made sand island in the sea.

The Green Party said the photo raised concerns, not only because heavy machinery on a beach altered the natural formation of the area, but also since we learned that similar projects were carried out each year by the same perpetrators.

The official excuse, the party, said, was the erosion of nearby rock formations and the need to landscape the beach at this time every year.

“So, instead of examining the reasons for the erosion and put in place the necessary measures, officials opt for the easy solution of the excavator,” the party said.

The act was criticised by Akel, which also mentioned other incidents in the broader region.

In recent months, the Paralimni municipality and Mayor Theodoros Pyrillis who apparently embarked on a campaign to gentrify certain beaches on the area’s coastline.

The move prompted fierce reactions from conservationists who posted photos of excavators widening beaches, opening access roads and other earthwork.

On Thursday, the interior ministry said permission is given every year to local authorities to remove loose rocks from beaches within the Paralimni boundaries.

“It is clearly recorded on the permit that rock work is not included, nor any earth work, even in mild form,” a ministry statement said.

It said district officers inspected the work and where violations were spotted the party involved was ordered to stop.

In cases where the landscape relief is affected the parties responsible are reported to the police.

One such case was the work the Paralimni municipality did in the Skoutari area, in front of the Malama hotel. The police were now handling the matter together with the Legal Service.

The district administration is also examining the possibility of suing the municipality in connection with work done in front of the Cavo Maris hotel, and Konnos beach, the ministry said.

The ministry said it would take all necessary measures when needed, including to restore an area or take someone to court. It also urged Paralimni municipality and other local authorities to refrain from carrying out any work without permission.

Our View: Treatment of Helios orphans by the government is sickening