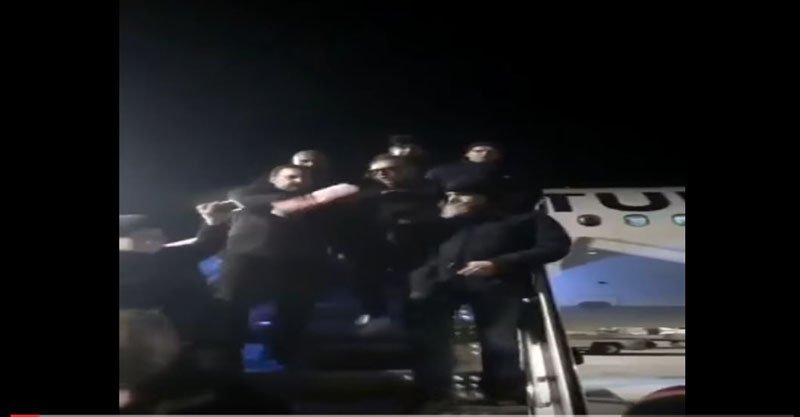 Turkish fashion designer Barbaros Sansal who was deported from the north after being arrested for comments he made in a video posted on social media criticising certain religious circles in Turkey and the Turkish government, was assaulted by an angry mob on the stairs of a plane moments after landing at Attaturk airport on Monday night.

Sansal, who was questioned by police is expected to be charged with ‘provoking the people towards hatred and hostility,’ something he denies.

According to reports in the Turkish media, his lawyer said that Sansal rejected an allegation about a tweet which said “Sunni Muslims dressed in Santa outfits shot people in a place where its known that most workers and the owner are Alewite,” claiming it did not belong to him.

An outspoken critic of President Tayyip Erdogan, Sansal often visits both northern Cyprus and the Republic, and was in the north when he posted his New Year video.

In it he mentioned journalists arrested in Turkey, corruption within the ruling AKP, the abused children and murdered women and criticised the “bigoted” circles in Turkey which had spread “hate speech” against New Year celebrations.

Sansal said that he was in the north and was going to enter 2017, drink all he could, then go to the south of the island to enter 2017 once again, reminding listeners that the two sides on the island were on different time zones.

Much of the video was critical of fundamentalist circles in Turkey which, in the lead up to Christmas and New Year, had been spreading messages telling people that celebrating the New Year was a “Christian thing” and that those who celebrated it were infidels who sinned by consuming alcohol. Many of those taking part in the anti-New Year campaign, including the Directorate of Religious Affairs, have been ridiculed in social media for not knowing the difference between Christmas and New Year.

According to some reports, Sansal’s message was uploaded some 30 minutes before the attack in a nightclub Istanbul on January 1 in which a gunman killed 39. This has led to allegations that he had knowledge of the terror attack.

Sefa Karahasan, Milliyet newspaper’s correspondent in the north tweeted “This despicable man who swears at Turkey is living in north Cyprus. While he needs to be thrown out of north Cyprus for drugs, he is being protected. Who is protecting him?” which is said to have triggered the arrest.

He erased this tweet after criticisms on social media, but then wrote a message that Sansal was to be expelled because of a drug offence.

The Turkish fashion designer was arrested at Tymbou (Ercan) airport for possessing cannabis. It is thought that the authorities will reactivate a frozen deportation order issued for Sansal over the drug offence.

Turkish Cypriot daily Afrika newspaper on Tuesday referred to the issue on its front page headlining: ‘Turkey’s fascism expanded’ to the north of Cyprus and that “hysteria for lynching escalates”.

The paper publishes the names of the eight persons who complained against Sansal to the “police”. Former ‘minister’ Kenan Akin, wanted for the murder of Greek Cypriot Solomos Solomou in Dherynia in 1996 was among them.

Commenting, Afrika’s publisher, Sener Levent wrote that Turkey was living an insanity, which had reached the north of Cyprus a long time ago. “Barbaros Sansal’s arrest and immediate deportation to Turkey for an innocent video indicate very seriously the dangers”, noted Levent wondering whether the people were seeing the dangers.