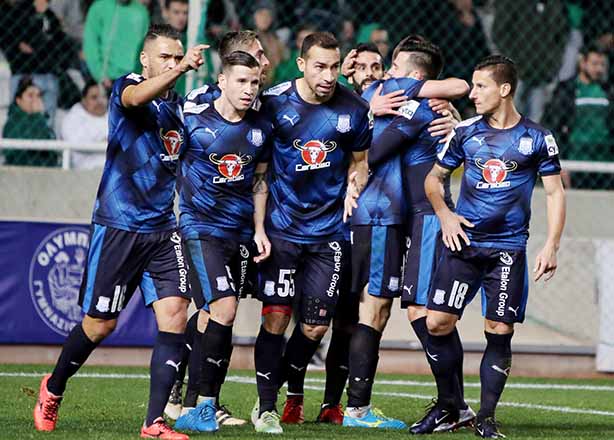 Leaders Apoel maintained their grip at the top of the table with a hard fought 2-0 win over Doxa Katokopias while Apollon continued their impressive run, this time defeating Omonia in Nicosia.

AEK were deserved winners against Nea Salamina while third-placed AEL unexpectedly dropped two points as they could only draw with Anorthosis in Limassol.

Apollon recorded their fifth straight win under new coach Sofronis Avgousti as they scored late against Omonia to clinch a 2-1 victory.
This was Apollon’s third consecutive win against potential title challengers having defeated AEK and AEL before their triumph over Omonia at the GSP.

The Limassol team began the game on the front foot, dominating play and pushing forward with every opportunity and were rewarded in the 15th minute when Sardiniero raced clear and slid the ball under oncoming Omonia keeper Panayi.

Apollon continued to push forward and both da Silva and Maglica missed a couple of chances each to double their lead before the break.

Omonia began the second half in the same way that Apollon had started the first, and they were duly rewarded when defender Carlitos met Clayton’s corner to steer the ball past Bruno Vale.

Four minutes later the home side should have taken the lead but Florescu somehow managed to miss the target when it seemed easier to score.

The game fizzled out in the final 20 minutes but just when a draw seemed the likely result Sardiniero, who had not started a game this season, burst into Omonia’s area and fired the ball past Panayi for a second time six minutes from the end.

The result was a big blow to Omonia’s title aspirations as they now trail leaders Apoel by nine points. Their coach John Carver seems to be under a lot of pressure regularly being booed by his own supporters.

“It’s difficult for a coach to be treated in such a way for 90 minutes by his own fans,” said a despondent Carver after the game.

Even though Apoel failed to impress against Doxa they still ran out comfortable 2-0 winners thanks to goals in each half from Igor de Camargo and Pieros Sotiriou.

Doxa impressed against the defending champions but despite controlling the game for large periods they were unable to put Apoel’s backline under any serious threat.

However, their winter signings who made the starting line-up, Gullon, Korominas and Sanchez, seem more than capable of helping Doxa steer clear of the relegation zone.

AEL were unable to break down a resolute Anorthosis team and are now five points off the top.
The Famagusta team were more than a match for AEL and could have snatched all three points if their strikers showed more belief in front of goal.

AEK kept up the pressure on Apoel with an easy 2-0 win over Nea Salamina with Truyiols and Ivan Triscovski getting on the scoresheet.

Ermis took advantage of Salamina’s loss and, coupled with their 2-0 win over Karmiotissa, reclaimed the coveted sixth place.

In the final weekend game, Ethnikos Achnas recorded their first away win of the season as they defeated Anagennisi Dheryneias 3-2. Ethnikos had raced into a three-goal lead inside the half hour but Dheryneia fought back to 3-2 but the visitors managed to hang on for the crucial three points.

Aris won 3-2 at AEZ in the final match of the round on Monday evening.

Apoel sack Ingebrigsten after only seven weeks, Ouzounides takes over

Cyprus’ top four looking to pull ahead of the pack