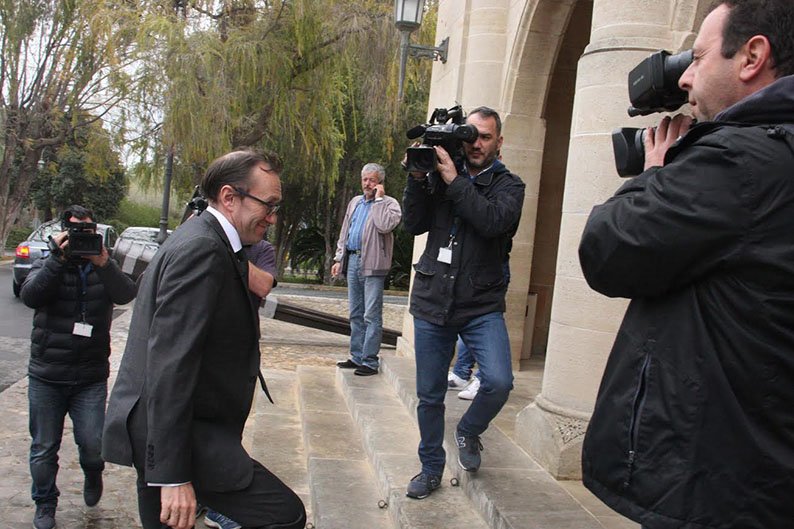 UN Special Adviser Espen Barth Eide said he has seen nothing from the leaders that would suggest it would be impossible to overcome the current impasse in the talks but warned that outside influences which did not want a settlement, would likely try again to derail the process.

Eide met President Nicos Anastasiades on Friday morning in a bid to find ways to restart reunification talks, stalled over a controversial parliamentary decision to commemorate in public schools, the 1950 Enosis (union) referendum in which Greek Cypriots voted to join Greece. The proposal was tabled by anti-settlement, far-right party Elam.

Turkish Cypriot leader Mustafa Akinci has refused to attend meetings with Anastasiades before parliament “corrected the mistake”. Anastasiades has conceded that the decision was a mistake but accused the Turkish side of overreacting and using it as a pretext to stall the talks.

Eide told reporters after meeting Anastasiades that “right now trust is not at its best moment” and that “we’ve had probably the most difficult week in this process”.

However, he said he had seen nothing over the last week from the leaders to suggest it was not possible to overcome the impasse.   What had happened was a strong reminder, he added, that issues outside of the process can have a negative impact on historical fears and concerns.

“Even if we overcome this one maybe there will be new attempts to derail the process,” said Eide. “To be in favour or against a settlement is perfectly fine but let’s not be fooled and not see that the people who don’t want a settlement will try to find ways to convince the two leaderships to believe that the process is actually a problem between them rather than a problem of yes or no to a settlement.”

Eide, who is due to meet Akinci on Saturday said he and Anastasiades, during their meeting had explored ways of overcoming the deadlock and also what to do “when we are back talking” because he said there was a shared understanding that when they overcome this obstacle “and I think we will”, that the leaders can use their time as effectively as possible in order to work out a methodology for confronting the last outstanding issues.

He said the president had made some good points on this and he would share these ideas with Akinci. It was very much about trying to see how the essential outstanding issues could be structed in such a way that “we remember what is important and what is more secondary and what flows from the other issues,” he said.

“My strong sense is that the will is there. We have an issue. There is no way to belittle the fact that we’ve had probably had the most difficult week in this process but we must not allow the sustained progress over 22 months to be destroyed by what is essentially an issue that is outside of the talks themselves,” the special envoy said. “There is an issue of trust here”.

He said he himself has often been accused of being too optimistic or of being a “hopemonger” but added that the source of his optimism was not that he was not a realist or does not understand the magnitude of the issues but was very much about the partnership, trust and leadership and the will to go the extra mile that he had seen so many times with the leaders.

“The trust at leadership level is the principle capital of his process,” said Eide.

He also said that if the leaders did not have support to overcome the impasses in their personal trust, it would also be difficult to re-establish intercommunal trust.

Reports earlier on Friday suggested the UN envoy might try to arrange an informal dinner between the leaders to defuse the tensions and get the talks back on track.

Asked about this, he appeared to suggest something like that it might be a possibility. If the talks were to resume “it doesn’t mean you can walk into the room the next morning as certain things would have to be settled first”, he said.

Tori Spelling has given birth to a baby boy