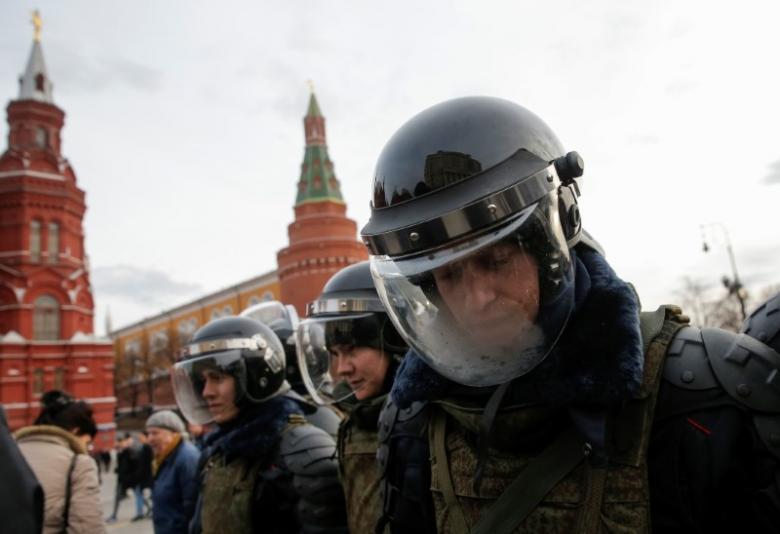 Law enforcement officers line up as they block opposition supporters near Kremlin in Moscow, Russia, March 26, 2017

The Kremlin on Monday rejected calls by the United States and the European Union to release opposition protesters detained during what it said were illegal demonstrations the previous day and accused organisers of paying teenagers to attend.

The protests, estimated to be the biggest since a wave of anti-Kremlin demonstrations in 2011/2012, come a year before a presidential election that Vladimir Putin is expected to contest, running for what would be a fourth term.

Police detained hundreds of protesters across Russia on Sunday, including opposition leader Alexei Navalny, after thousands took to the streets to demonstrate against corruption and demand the resignation of Prime Minister Dmitry Medvedev.

Medvedev’s spokeswoman has called corruption allegations against him “propagandistic attacks,” saying they amount to pre-election posturing by Navalny, who hopes to run against Putin next year.

Opinion polls suggest the liberal opposition, which Navalny represents, has little chance of fielding a candidate capable of unseating Putin, who enjoys high ratings. But Navalny and his supporters hope to channel public discontent over official corruption to attract more support.

The United States and the European Union both issued statements calling on Russia to free detained protesters, but Kremlin spokesman Dmitry Peskov said on Monday such calls were wide of the mark.

“We can’t agree with these calls,” Peskov told reporters on a conference call, saying the police had been professional and properly enforced Russian law.

He said the Kremlin had no problem with people expressing their opinions at protest meetings, but said the timing and location of such events had to be agreed with the authorities in advance, something which he said had not been done in large part on Sunday.

The authorities are concerned opposition activists will try to encourage people to break the law again in future, he said.

“We can’t respect people who deliberately misled minors — in essence children — calling on them to take part in illegal actions in unsanctioned places and offering them certain rewards to do so, thus putting their lives at risk,” said Peskov.

“What we saw yesterday in certain places, and especially in Moscow, was a provocation.”

He said police had gathered factual evidence that some teenagers, who had been detained, had been paid cash by protest organisers to attend.

The Kremlin would listen to what people who took part in other sanctioned anti-government protests in some Russian cities had said on Sunday, Peskov promised.

Andy Murray a doubt for Davis Cup with elbow injury