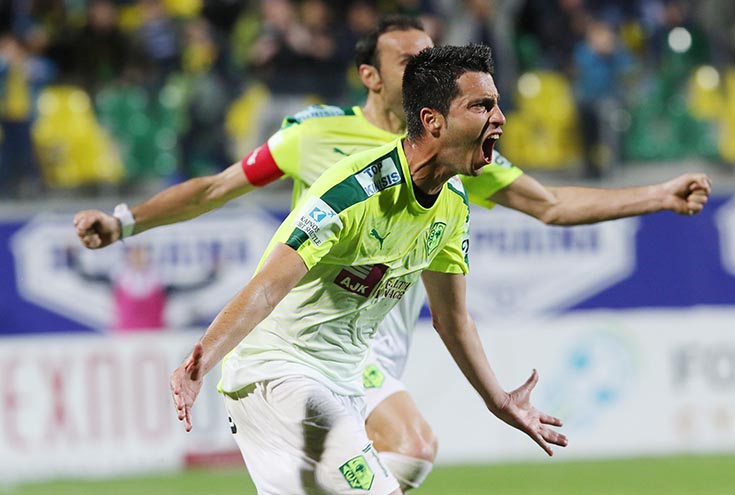 The title race is back on following Apoel’s 2-1 loss to AEK and Apollon’s easy win in Nicosia against Omonia, with the gap being reduced to six and four points respectively.

In the relegation scrap Doxa maintained their slim hopes of beating the drop with an emphatic 3-0 win over Karmiotissa.

Doxa, along with Aris, seem to be the two teams that will fight to remain in the top flight.

AEK’s Larena was the hero for the day as he kept his cool in added time to beat Apoel’s goalkeeper Waterman from just outside the penalty area with a brilliant free-kick.

The Larnaca team had to do it the hard way as they fell behind in the 8th minute after Apoel’s skipper Nuno Morais was left unmarked inside the box and he steered the ball past AEK’s keeper Giorgallides.

AEK tried to respond but they were ineffective in the final third of the pitch clearly missing their (suspended) top scorer Ivan Triscovski. In fact it was Apoel who had the best chance of the first half but Baral’s shot from inside the area went just wide.

The second half followed the same pattern as the first with AEK bossing possession but unable to penetrate the visitors’ well-organised backline, limiting their efforts to long-range strikes that were dealt comfortably by Waterman.

Apoel’s Embesilio could have wrapped up the game when he was sent clear by Pieros Sotiriou in 77th minute but his shot went the wrong side of the post with Girgallides well beaten.

With time running out AEK began pumping long balls into the area and in the 81st minute it paid off. Garrido’s hopeful long ball evaded three players before falling nicely to Nestoras Mitides who blasted the ball past the Apoel keeper.

With confidence running high AEK poured forward in search of the winner and in the third minute of added time they were rewarded with Larena’s deft strike.

In an almost empty GSP, Apollon had few problems against Omonia who for yet another game failed to impress.

The Limassol team were on the front foot from the very first whistle and the only worrying thing about their display is that they had to wait till the 64th minute to open the score.

In fact they needed the ‘help’ of Omonia’s keeper Panayi to break the deadlock as his poor throw out allowed the visitors to take possession and with Omonia’s defence in disarray Sardinero beat Panayi from close range.

The goal gave Apollon even more confidence and it was no surprise when Piech headed in his team’s second seven minutes from time.

In the third championship group game AEL put an end to their winless run thanks to a 13th minute goal by defender Kyriacou.

Anorthosis had to play all but six minutes of the game with a player less after their keeper Koprivec was sent off for denying an opponent a clear goal scoring opportunity.

Doxa produced one of their best performances of the season and defeated Karmiotissa by 3-0.

Fofana gave them the lead very early on in the game with Korominas and Tiago Gomes scoring either side of the break to ensure the three points.

In the game between Aris and Ethnikos a 58th minute penalty by Zelayia was enough to give Ethnikos the three points and plunge Aris further in the relegation battle.

HIGHLIGHTS OF THE WEEKEND GAMES