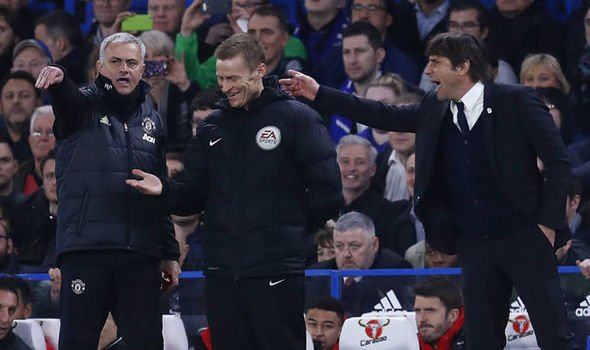 A point to prove: nothing irks Jose Mourinho (left) more than suggestions that Antonio Conte represents the future while he encapsulates the past, a once great manager out of tune with current sensitivities

By the time Chelsea walk out at Old Trafford on Sunday (6pm) their Premier League lead may again have been cut to a slender four points.

For the second weekend running, Antonio Conte’s side kick off after their main pursuers Tottenham Hotspur but, unlike last Saturday when they were always odds-on to restore their advantage by beating Bournemouth, real danger lurks in the form of Manchester United – and ex-manager Jose Mourinho.

When the teams last met the Portuguese appeared unusually relaxed, eschewing the regulation collar and tie he always wore as Blues manager for gilet and trainers. But he still ended up squaring up with Conte on the Stamford Bridge touchline during a fractious FA Cup quarter-final that saw Ander Herrera sent off.

Chelsea’s 1-0 win was their second over United this season and although the result was much closer than the 4-0 league drubbing, the chasm that has opened between the teams was clear.

Sunday marks the start of a testing period for United with fixtures against City, Arsenal and Spurs looming, alongside their continuing Europa League campaign.

Mourinho will respond to the workload by rotating his squad. In the process he will highlight one of the big differences between United and Chelsea this season: while the Portuguese has made 85 team changes in his Premier League line-ups, Conte has switched personnel just 31 times, an average of one per game and the fewest in the league.

That consistency has provided the bedrock of their title challenge and Conte can approach Sunday’s game knowing it is Mourinho’s United who must take the initiative on a ground where they have already drawn nine times this season.

Even their wins have often been scratchily unimpressive and Chelsea will set up to play on the counter-attack with N’golo Kante prowling and ready to pounce in midfield.

Much has been made of Kante’s impact this season, when he has perfected the art of perfect tackling at a time when referees punish the slightest aberration.

He was named on the PFA player of the season shortlist along with Eden Hazard on Thursday.

You could have bet Paul Pogba’s transfer fee on United’s midfielder not joining them on the six-man shortlist because despite costing 59 million pounds more than Kante, he has made a fraction of the impact.

Sunday provides Pogba with the perfect opportunity to make the big-match statement that has been lacking for United, who are unbeaten in 21 league games but still 18 points adrift of the leaders in fifth place.

Nothing irks Mourinho more than suggestions that Conte represents the future while he encapsulates the past, a once great manager out of tune with current sensitivities.

But his recent public criticism of Luke Shaw and David de Gea has added to the narrative and he too has something to prove on Sunday. If his brain is really big enough to do Shaw’s thinking for him, as he bizarrely claimed recently, then surely it can come up with a plan to outwit Conte?

Success would hand a huge boost for Spurs, who entertain Bournemouth in Saturday’s early kick-off (2.30pm) knowing they can again pile the pressure on Chelsea.

Third-placed Liverpool travel to West Bromwich Albion on Sunday (3.30pm) while Arsenal manager Arsene Wenger must wait until Monday’s match against Middlesbrough (10pm) for the chance to silence his detractors and check a disastrous run of four away defeats.

The human cost of not cooperating