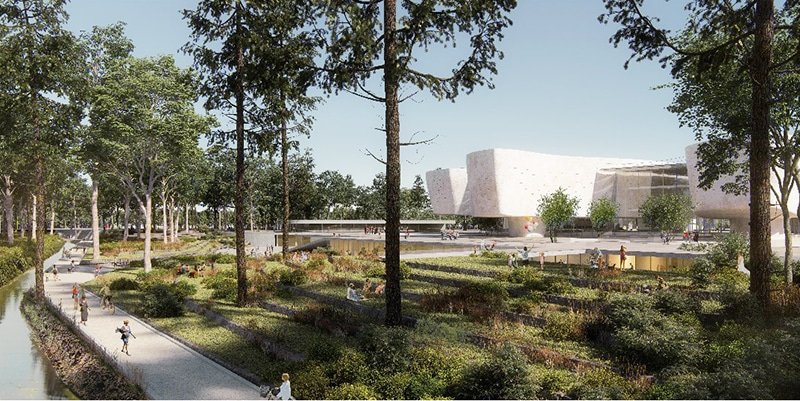 An artist's impression of the new museum

A Greek architect’s design has won the competition for the island’s new archaeological museum, it was announced on Tuesday.

According to the announcement the winner of the competition is architect Theoni Xanthi. The second and third prizes went to Pedro Pitarch Alonso from Spain and Paul Kaloustian from Lebanon, respectively.

In total, seven architectural designs had been shortlisted from 129 proposals submitted to the communication and works ministry for the construction of the new museum – a €50m project – following an international competition announced last year.

The wining architect will be invited to develop the architectural proposal and prepare specifications that will form part of the tender documents for the selection of contractors with whom they will work on the final design and on supervision of construction.

The proposals were assessed by a nine-member committee chaired by the permanent secretary of the communications and works ministry Alecos Michaelides, and comprised of architects, among them the renowned Sir Peter Cook and Elias Zegelis, and the head of the antiquities department.

The new museum is to be constructed within the old Nicosia general hospital site, that was demolished in 2010.

Works for the construction of the new museum, which is to replace the current archaeological museum that was established in 1882 and is located a few metres away from the old hospital site, are expected to begin next year.

At the moment, efforts are underway to relocate the Nicosia outpatients’ clinic and the civil registry and migration department currently housed within the old hospital site before the construction works begin.

The new museum is expected to be constructed in two phases. The first will include rooms for permanent and temporary exhibitions, storage areas for the antiquities, workshops, restaurant, cafeteria, training room, shop, the museum administration offices, underground parking for 100 cars and exterior landscaping.

The second phase will include a library, auditorium/conference hall, the department of antiquities offices, underground parking for 200 vehicles, and exterior landscaping.