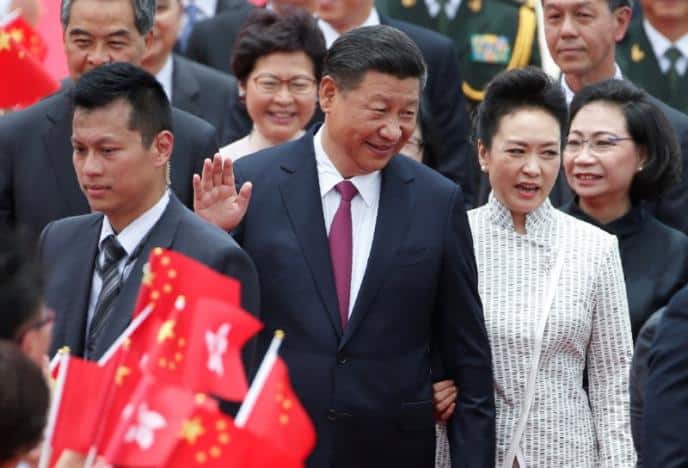 Chinese President Xi Jinping and his wife Peng Liyuan arrive at the airport in Hong Kong, China, ahead of celebrations marking the city's handover from British to Chinese rule, June 29, 2017

Chinese President Xi Jinping said on Thursday China would work to ensure a “far-reaching future” for Hong Kong’s autonomy, but he faces a divided city with protesters angered by Beijing’s perceived interference as it marks 20 years of Chinese rule.

Beijing has promised Hong Kong’s capitalist system will remain unchanged for “at least” 50 years until 2047, but it has not clarified what happens after that.

“Hong Kong has always tugged at my heartstrings,” Xi said on arrival at Hong Kong airport for the handover anniversary in front of flag-waving crowds at the start of a three-day visit.

“… We are willing, together with different sectors of Hong Kong society, to look back on Hong Kong’s unusual course in the past 20 years, draw conclusions from the experience, look into the future and to ensure ‘one country, two systems’ is stable and has a far-reaching future.”

Xi’s message was consistent with those of other senior Chinese leaders visiting Hong Kong, that Beijing will safeguard the city’s development and prosperity.

In reality, however, fears of the creeping influence of Communist Party leaders in Beijing have been starkly exposed in recent years by the abduction by mainland agents of some Hong Kong booksellers who specialised in politically sensitive material and Beijing’s efforts in disqualifying two pro-independence lawmakers elected to the city legislature.

Xi did not respond to journalists, including one who asked whether Liu Xiaobo, China‘s Nobel Peace Laureate and jailed dissident, would be released and allowed to travel overseas to be treated for cancer.

“These past five years have not been easy at all,” Xi added.

He urged officials to support incoming leader Carrie Lam, who will be sworn in on Saturday, and contribute to the “China dream”.

An annual July 1 protest pressing social causes, including a call for full democracy, is expected to take place after Xi leaves on Saturday. On Wednesday night, police arrested several well-known pro-democracy activists, some of whom scrambled up a monument symbolising the city’s handover from British to Chinese rule.

Among them was student leader Joshua Wong, who said on his Facebook page on Thursday his detention for more than 16 hours was highly unusual and police had yet to take his statement.

HONG KONG “HAS BEEN LIED TO”

Part of the major rift under Chinese rule in Hong Kong has been a push by activists, including the 2014 street protests, to get China to live up to a constitutional promise under Hong Kong’s mini-constitution to allow universal suffrage as an “ultimate aim”.

“This promise has been shattered under the watchful eyes of the whole world,” organisers of Saturday’s planned rally wrote in a statement. “Hong Kong has been lied to for 20 years. Let’s retake Hong Kong for a real and fully fledged democracy.”

A massive security presence is expected with thousands of police deployed to maintain order as protests simmer.

At least 200 protesters sat in sweltering heat outside Hong Kong’s highest court on Thursday night to demand the release of dissident Liu.

“Xi Jinping should release Liu Xiaobo,” said Annie Tam, who watched as her six-year-old son held a candle. “I respect Liu very much. He really is sacrificing himself for democracy.”

The streets of Hong Kong have been festooned with Chinese banners and paraphernalia, including two huge harbourfront screens carrying celebratory messages. Upwards of 120,000 youngsters will join China patriotic activities at a time of growing disillusionment with Beijing among the city’s younger generation.

“We … just hope our people can live in peace and contentment,” said Lee Wing-lung, 66, a retired engineer standing opposite the hotel where Xi is staying, taking snapshots with his phone.

“I hope Hong Kong can have a good and peaceful atmosphere.”

“As we look to the future, Britain hopes that Hong Kong will make more progress towards a fully democratic and accountable system of government,” Johnson said in a statement.

“Britain’s commitment to Hong Kong – enshrined in the Joint Declaration with China – is just as strong today as it was 20 years ago.”

Many observers point out that the British did nothing to promote democracy until the dying days of more than 150 years of colonial rule. Britain, looking for new trade partners as Brexit approaches, is also keen not to upset China, the world’s second-largest economy.