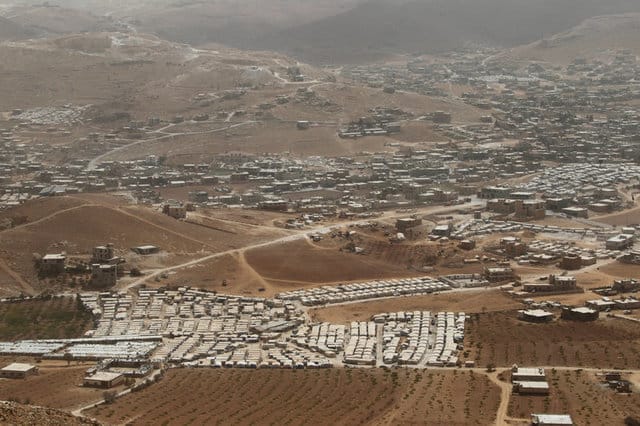 FILE PHOTO: A general view shows Syrian refugee camps dotted in and around the Lebanese town of Arsal, near the border with Syria

Five suicide bombers attacked Lebanese soldiers as they raided two Syrian refugee camps in the Arsal area at the border with Syria on Friday and a sixth militant threw a hand grenade at a patrol, the army said.

The army said seven soldiers were wounded and a girl was killed after one of the suicide bombers blew himself up in the midst of a family of refugees. It did not elaborate.

The raids were part of a major security sweep by the army in an area that has been a flashpoint for violent spillover from the Syria crisis, and several Islamic State officials were among some 350 people detained, a security source said.

The defence minister was quoted as saying the incident showed the importance of tackling the refugee crisis – Lebanon is hosting over 1 million refugees – and vindicated a policy of “pre-emptive strikes” against militant sleeper cells.

A Lebanese army statement said one suicide bomber had detonated his explosive laden belt in front of an army patrol during a manhunt for suspected militants in a refugee camp in the north-eastern border town. Three soldiers were wounded.

The army said four other suicide bombers blew themselves up without causing any injuries among soldiers, while another militant threw a grenade at a patrol, wounding four soldiers.

Lebanese TV station al-Mayadeen quoted Defence Minister Yacoub Sarraf as saying the army had proved “once again it is the safety valve of the country”.

The UN refugee agency figure of Lebanon hosting more than 1 million registered Syrian refugees constitutes a quarter of its population.

The government puts the number at 1.5 million. They are scattered across the country in informal tented settlements where many face the risk of arrest due to lack of legal residency that they struggle to obtain.

The Lebanese army has in recent months stepped up raids in the makeshift camps built on the edge of Arsal, where refugees live in squalid conditions.

The manhunt inside the sprawling camps on the border area came after intelligence reports that militants were preparing to stage a series of attacks inside Lebanon.

The camps around the town have long been a haven for militants coming from Syria who have clashed with Lebanese forces conducting security raids searching for suspects hiding among the refugees.

The militants briefly overran the town in 2014 in a battle that killed dozens and marked one of the more serious spillovers of the Syrian conflict in Lebanon.

A number of attacks in Lebanon in recent years have been linked to the war in Syria, where Lebanese Shi’ite group Hezbollah is fighting in support of President Bashar al-Assad.