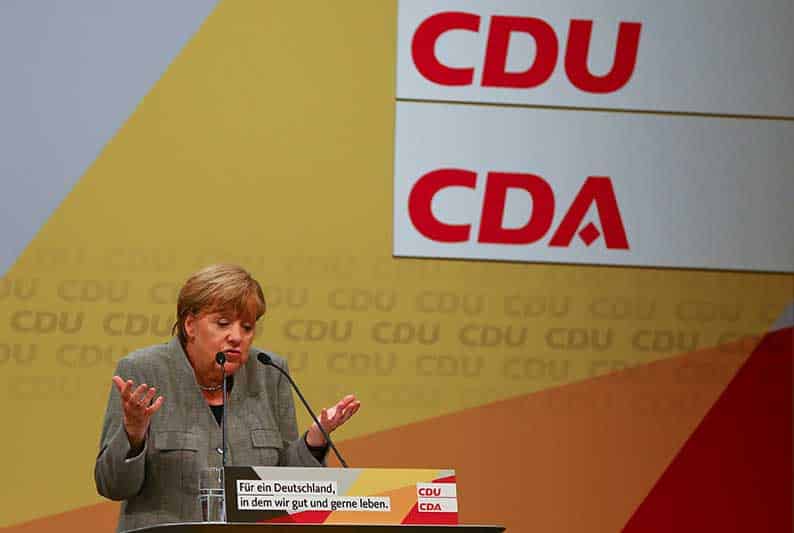 Angela Merkel, German Chancellor and leader of the conservative Christian Democratic Union (CDU) party, speaks at the start of the CDU's election rally for Germany's general election in Dortmund, August 12, 2017

German Chancellor Angela Merkel on Saturday rejected a proposal made by her Social Democrat rivals to introduce quotas for electric cars in Europe, arguing the implementation of such targets would prove too complicated.

Social Democrat leader Martin Schulz, Merkel’s main challenger in the Sept. 24 national election, on Friday called for such a quota – both in Germany and across the European Union, saying it would encourage industry to innovate.

“I don’t think that the quota for E-cars – for this technology – has been well thought out,” Merkel told supporters of her conservative Christian Democratic Union (CDU) and the party’s employers’ arm in the western city of Dortmund.

“Then we would negotiate for ages in Europe. What would we do if it is not adhered to?” she added of the quota. “Could petrol engine cars no longer be bought?”

Instead, Merkel called for a bigger strategy for helping the auto industry make the transition to producing electric cars.

“We need to innovate quickly,” she said. “Where companies can’t manage it alone, the government must stand behind them and shove things along.”

The auto industry is Germany’s biggest exporter and provides about 800,000 jobs. But politicians fear Germany’s carmakers are failing to invest enough in new technology and infrastructure – concerns that have been mounting since the Volkswagen emissions scandal broke in 2015.

Merkel, whose CDU leads rival parties in opinion polls, is campaigning for a fourth term in office on a platform of economic stability. She has repeatedly warned against “demonising” diesel engines.

Her conservatives have promised tax cuts worth some €15bn annually as well as increased spending on infrastructure, defence and security.