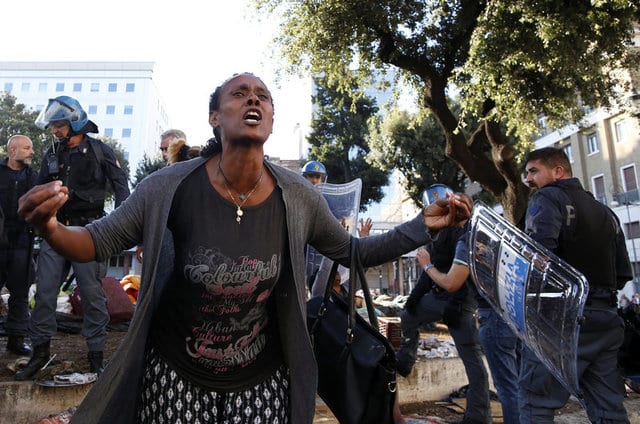 A refugee protests in the street after being removed by police officers from a small square that had been occupied by refugee squatters, in central Rome

The frontline states of Europe’s migrant crisis, Turkey and Italy, are most worried about immigration, a global survey said on Thursday, while Britain has become much less concerned.

Nearly three in five Turks and Italians surveyed said immigration had a negative impact on their country, with an even higher percentage saying their country has too many immigrants.

Thirty-nine per cent of all respondents in the 25 countries surveyed wanted their borders closed to refugees entirely.

“The study shows very clearly that immigration remains a major global concern,” Bobby Duffy, managing director of Ipsos Mori, which carried out the survey, said in a statement.

“People are twice as likely to think that immigration is bad for their country than think it is good.”

Turkey has taken in some 3 million Syrian migrants since the start of civil war in 2011, making it home to the world’s largest refugee population.

Fewer migrants are going through Turkey to reach Europe since it signed a deal with the European Union (EU) last year.

Italy has become the main Mediterranean country through which migrants in boats, largely fleeing violence and poverty in Africa, are reaching Europe.

Britain was one of the most bullish about immigration, with 40 per cent of respondents saying it had a positive impact on their country – up from 19 per cent in 2011.

In last year’s survey on “What Worries the World”, 42 per cent of Britons said they feared migration

Britain was the country with the greatest fears about immigration in a 2016 survey of “What Worries the World”, with 42 per cent of UK respondents concerned about it.

Britain triggered the formal process to leave the EU in March after 52 per cent of Britons voted last year to leave the bloc amid concerns about immigration, deteriorating public services, competition for jobs and a general economic malaise.

“This mirrors what we’ve seen in other national surveys in Britain, where attitudes have become more positive,” said Duffy.

Those who support Britain’s exit from Europe could be feeling reassured, while those who favour immigration might be keener to express their views, he said.

The pollster interviewed just under 18,000 people in an online poll conducted between late June and early July.