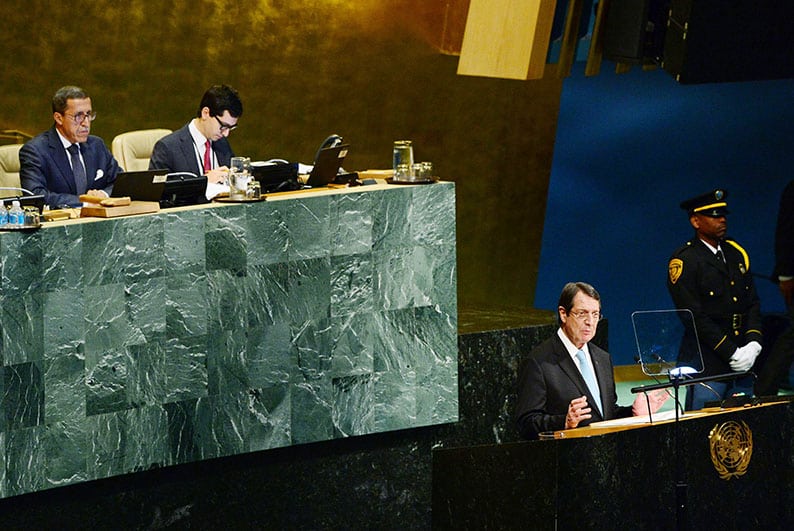 Despite the latest setback in reunification talks, Nicosia stands ready to try again at the negotiating table in order to resolve the decades-long intractable problem, President Nicos Anastasiades told world leaders on Thursday.

“I yet again urge Turkey and our Turkish Cypriot compatriots to realise that it is only through mutual respect and compromises and not obsolete fixations to failed practices that we will achieve a viable and lasting settlement,” Anastasiades said in his address at the 72nd session of the United Nations General Assembly in New York.

“A settlement which should leave neither winners nor losers and fully respect and address the sensitivities and concerns of both communities. This is the only way for Cyprus to fully utilize its potential and exploit its unique geographical position.

“This is my vision,” he noted.

Despite the disappointment from the deadlocked talks in Switzerland earlier this year, the president said that during his meeting with the UN Secretary-General on Friday, he would “convey our readiness to immediately resume negotiations, in accordance with his framework and always in line with the relevant UN Resolutions.”

Although, he immediately added, a potential new Conference on Cyprus should be preceded by “thorough and solid preparation” so as to avoid another failure.

Despite not wishing to engage in a blame game, Anastasiades said, he attributed the failed talks in Switzerland “exclusively to the intransigent stance of Turkey which, instead of being positively predisposed to establishing a truly independent, sovereign and normal state, through its proposals aimed at reducing Cyprus to a Turkish protectorate.”

This was in stark contrast to the “constructive stance” adopted by the Cyprus government at Crans Montana, he added, which was in line with the UNSG’s framework proposal for the way forward.

The UN chief had presented an outline of “six fundamental thematic topics” which consisted on the one hand of the chapter on Security and Guarantees, including the withdrawal of foreign troops, and on the other hand the issues related with the internal aspects of the Cyprus problem.

“Acting in full conformity with the outline of the UN Secretary-General, I submitted credible and realistic proposals which effectively addressed the sensitivities and concerns of both communities,” Anastasiades said.

“In stark contradiction to the framework of the UN Secretary-General and the positions of the other two guarantor powers, Turkey, adopting an inflexible stance, insisted on the following:

Maintaining the Treaty of Guarantee and the right of intervention, as well as a permanent presence of troops.”

Responding to Turkish President Tayyip Erdogan’s remarks before the General Assembly, where Erdogan described the Greek Cypriot positions in Switzerland as “incomprehensible,” Anastasiades posed a series of questions.

“Is it incomprehensible to aspire to establish an independent and sovereign State, without any foreign guarantees, any right of intervention by a third country and free from the presence of occupation troops?

“Is it irrational to advocate establishing a normal State in which all decisions will be taken only by its citizens, free from foreign dependencies?”

Turkey’s proposals would not have led to establishing a functional and viable state, he added.

Looking ahead, and despite the frustration with the latest round of talks, Anastasiades stressed that the people of Cyprus wish to end the “unacceptable status quo.”

“A state free from any foreign interventions and dependencies; ‘a normal state’, as the UN Secretary-General very correctly stated. A state led by Cypriots, for Cypriots.”

In the interim, Anastasiades called on the Turkish side to engage with confidence-building measures.

Returning Varosha and allowing resettlement by its lawful inhabitants would be “a game changer in creating a climate conducive to resuming negotiations with the aim of reaching a comprehensive settlement.”

A lasting settlement was the only way for Cyprus to fully utilize its potential and exploit its unique geographical position, he concluded.

EU islands should work together on air connectivity issues

Four arrests over drugs and threats