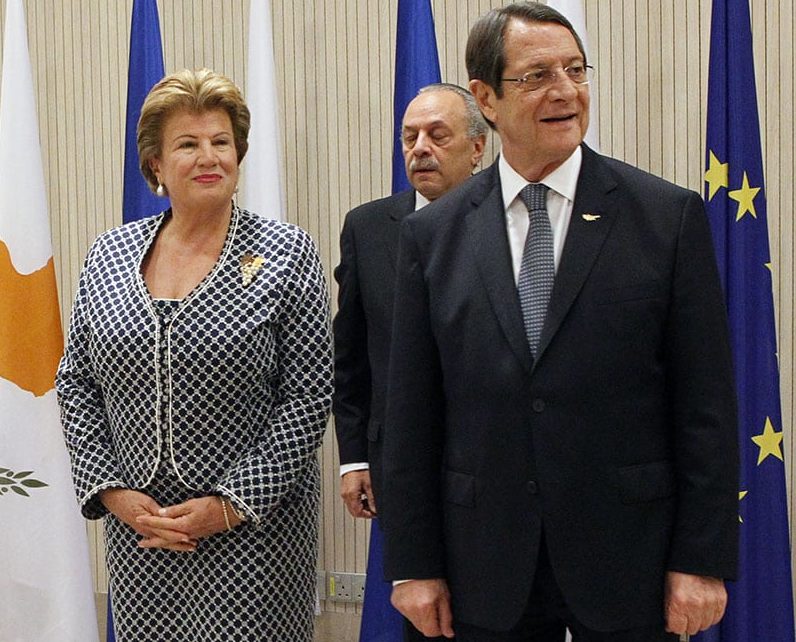 President Nicos Anastasiades,and the First Lady welcome guests at a reception for the members of the diplomatic corps, on the occasion of Cyprus’ Independence Day.

President of the Republic of Cyprus Nicos Anastasiades reassured the people of Cyprus that efforts to reach a solution to the Cyprus problem and reunify the country will continue, through the peace talks.

In statements after Sunday’s military parade on the occasion of Cyprus’ Independence Day, in Nicosia, President Anastasiades
congratulated the National Guard on an “impressive parade”, saying that we celebrate the Independence Day with proof of our decision to modernize the Armed Forces in order to be able to respond both to our European obligations and the defensive needs of our homeland.

The President said that the National Guard is being modernized with new weapon systems, a new image and through restructuring, which turned it into a truly professional military force. He pointed out that the reduction of the military service has not affected the National Guard, which, on the contrary has been strengthened.

He also referred to the cooperation with Greece, saying that this creates the necessary conditions to be able to negotiate from a position of strength. The Greek government was represented at the parade by National Defence Minister Panos Kammenos.

“The support and cooperation with Greece within the broader EU framework and the closer cooperation we have with the presence of the aircrafts here, create the necessary conditions to be able to negotiate from a position of strength but also to be able to prevent any aggressive action” he stressed.

The President paid tribute to the Cypriots who sacrified their lives for freedom and democracy and also conveyed a message of peace to the Turkish Cypriots.

“I would like to address myself to our Turkish Cypriot compatriots and tell them that this Republic, this homeland has a place for all of us, provided that we understand what it means to respect each other and where the limits of each other’s rights are”.

He assured the Cypriot people that “we will continue to make efforts so that, through a peaceful dialogue, we will be able to achieve the reunification of our country, get rid of guarantees, invasive rights, dependencies, occupational army. Only by doing so we can really live in conditions of peace, co-creation, and restore trust”.

Replying to a question, he said that Cyprus’ policy includes cooperation with all EU countries and the neighbouring ones, adding that the National Guard is conducting excercises with Greek, Egyptian, Israeli, French forces for instance.

‘So, in the framework of the wider strategic protection of the EU borders, cooperation will be continued, strengthened and enlarged’.