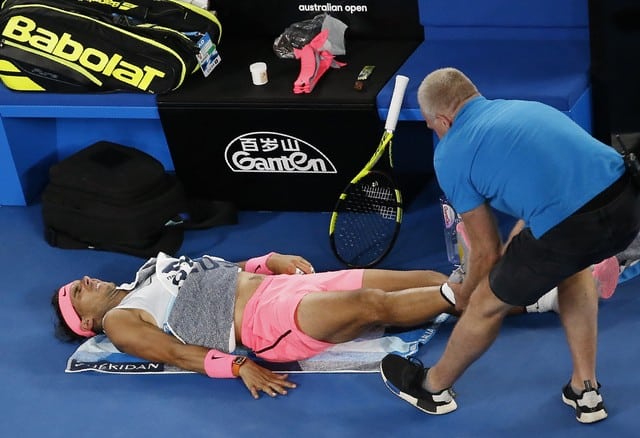 A wincing Nadal struggled with a muscle strain in his upper right thigh from late in the fourth set before abandoning the match at 3-6 6-3 6-7(5) 6-2 2-0, leaving a packed Rod Laver Arena crushed with disappointment.

It was only the second time the world number one has retired in over 250 grand slam matches, his last, coincidentally, during the 2010 quarter-finals against Andy Murray.

“I am a positive person … but today is an opportunity lost to be in a semi-finals of a grand slam.”

Of the seven grand slam quarter-final defeats of his career, five have now come on the blue hardcourts at Melbourne Park.

The 16-times grand slam champion said he felt the strain in the third set but was not affected until the fourth when it twinged during a scramble for a drop-shot.

He signed off his news conference on a sour note, complaining that too many players were getting injuries.

“Somebody who is running the tour should think a little bit about what’s going on,” said the Spaniard.

“I don’t know if they have to think a little bit about the health of the players.

“Not for now that we are playing, but there is life after tennis. I don’t know if we keep playing in these very, very hard surfaces what’s going to happen in the future with our lives.”

It overshadowed a majestic performance from sixth seed Cilic who reached his second Australian Open semi-final eight years after losing to Murray at the 2010 tournament.

Bashing forehands as if felling trees with an axe, the 2014 U.S. Open champion struck a mind-boggling 83 winners to set up a clash with 49th-ranked Briton Kyle Edmund, one of the more unlikely semi-finals imaginable.

“It was an unbelievable performance from both of us and it’s really unfortunate for Rafa,” the mild-mannered Cilic told Jim Courier during his post-match interview.

“He always gives his best and it’s unfortunate for him to end this way.”

Cilic will be favoured to reach his first final in Australia after showing courage to battle back twice against Nadal.

After dropping the first set, things looked grim when he double-faulted to go down a break in the second but he roared through four consecutive games in a stunning turnaround.

Although reading Nadal’s serve with ease, the Croatian missed out on a number of break points, and he gave the Spaniard a free set point in the tiebreak when he hammered a forehand long.

Nadal bellowed in celebration after closing it out with an overhead smash but Cilic ripped the momentum straight back from the Spaniard.

A barrage of winners pushed him to a 4-1 lead and he devoured a banana with similar gusto during the change of ends.

Nadal, meanwhile, was in trouble and a trainer worked on his thigh during a medical time-out.

He returned to the court to hold a dicey service game but winced in pain after scrambling to retrieve an exquisite lob.

The set was gone when Cilic pounded his 21st winner of the match and after another crisis talk with the trainer, Nadal threw in the towel after being broken in his next service game.