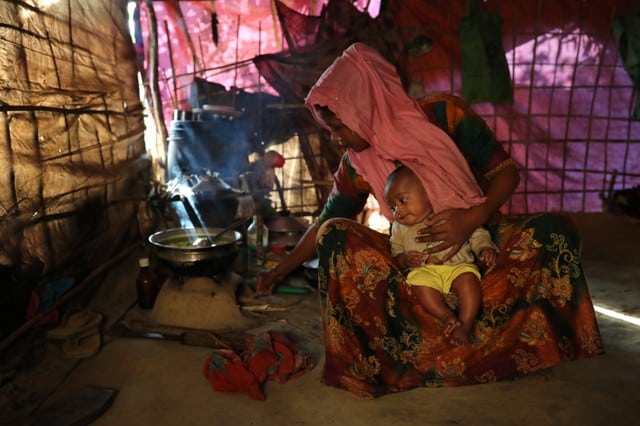 Hasina Khatun, 24, whose husband Abdul Hashim was among 10 Rohingya men killed by Myanmar security forces and Buddhist villagers on September 2, 2017, cooks a meal at Thayingkhali camp in Cox's Bazar, Bangladesh

Myanmar has bulldozed at least 55 villages that were emptied of their Rohingya Muslim inhabitants during violence that began last year, Human Rights Watch said on Friday citing a review of new satellite imagery.

The group said the demolitions in the northern part of Rakhine State could have destroyed evidence of atrocities by troops who swept through villages after Rohingya insurgents attacked 30 police posts and an army base on Aug 25.

The military response to the August attacks pushed 688,000 people across the border into Bangladesh, many of them recounting killings, rape and arson by Myanmar soldiers and police.

The findings by the New York-based rights group were published after Myanmar struck a deal on aid to the region with the United Nations and Japan, marking a shift in strained relations between government and the United Nations.

The United Nations and the United States have called the crackdown on the Rohingya ethnic cleansing, but the government of Nobel laureate Aung San Suu Kyi has blocked UN investigators and other independent monitors from the conflict zone.

Myanmar says its forces have been engaged in a legitimate campaign against Muslim “terrorists”.

Human Rights Watch said a total of 362 villages had been partially or completely destroyed since August. Since late last year, some of those villages – and at least two previously intact settlements – had been flattened, it said.

“Many of these villages were scenes of atrocities against Rohingya and should be preserved so that the experts appointed by the UN to document these abuses can properly evaluate the evidence to identify those responsible,” said Brad Adams, Human Rights Watch’s Asia director.

“Bulldozing these areas threatens to erase both the memory and the legal claims of the Rohingya who lived there.”

Human Rights Watch said a series of images taken from satellites showed that two villages in the area called Myin Hlut were not damaged by fire and were “likely inhabitable” before they were “destroyed and smoothed over by heavy machinery” between Jan 9 and Feb 13.

Government spokesman Zaw Htay was not immediately available for comment.

Myanmar officials have said the government is preparing areas to receive refugees who will return under a repatriation agreement signed by Myanmar and Bangladesh in November.

Myanmar state media reported in January that eight excavators and four bulldozers were working in the area.

Myanmar has established two reception centres and a camp for returnees, but it says they are temporary and people will be able to return to their original places or nearby.

The state-run Global New Light of Myanmar daily reported that Myanmar, Japan and seven UN agencies had struck a deal on help for Rakhine State worth $20m.

The United Nations suspended its activities in northern Rakhine and evacuated non-critical staff after the government suggested it had supported Rohingya insurgents last year.

Neither the state-run newspaper nor the United Nations specified what proportion of projects would be implemented in the northern part of the state where the Red Cross has been providing limited assistance.

“The UN agencies have to plan projects and will coordinate with the government for implementing their plans,” Win Myat Aye told Reuters on Friday.

Knut Ostby, the interim UN coordinator for Myanmar, said in a release the immediate concern was to provide humanitarian aid to people in need, “irrespective of their religion, ethnicity, gender or citizenship status”.

“More than 40 percent of people in Rakhine live in poverty and we have to reach them with development assistance in order to set the state on the path to peace and inclusive growth,” he said.

UN projects aim to reach half a million beneficiaries over the next year, the United Nations said in a statement, though adding that humanitarian access remained restricted.

The UN refugee agency has also been excluded from a Rohingya refugee repatriation process organised by Bangladesh and Myanmar.

The United Nations said it would keep calling for “voluntary, safe, sustainable and dignified return of refugees to places of origin – and UNHCR’s involvement in the repatriation process”.

Policeman dies in Bilbao after clashes with Spartak fans