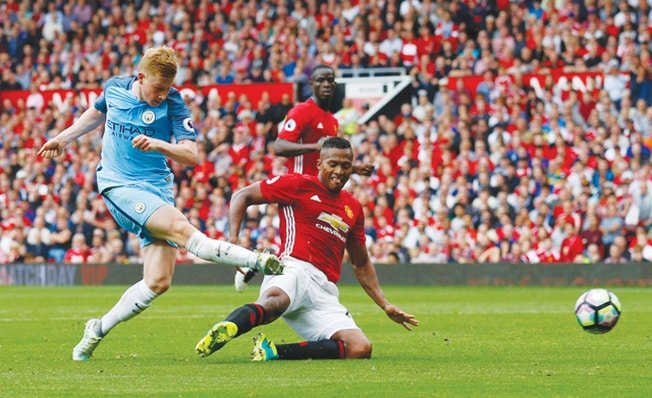 Victory over their neighbours would clinch the title for City with six games to spare, which would be the earliest the Premier League has ever been won

Manchester City can secure a third Premier League crown in record time on Saturday although bitter rivals Manchester United will be aiming to spoil the party at the Etihad Stadium.

Victory would clinch the title for City with six games to spare, which would be the earliest the Premier League has ever been won, but they will have to put behind them the disappointment of their 3-0 Champions League quarter-final first-leg defeat by Liverpool on Wednesday.

Three points would also move City within eight of the Premier League record haul for a season and put them two wins away from matching the record number of campaign victories set by Chelsea last year.

Beating their neighbours to seal a title success would be the icing on the cake for City fans, who had to look on as United dominated English football for the majority of the past 25 years.

“I know what it would mean – it would be like Barcelona winning the title at Madrid or Real winning at Barca,” City manager Pep Guardiola said. “It would be special.”

United have lost eight of their last 13 league games against City, winning three. Their previous eight top-flight defeats by City came over a 49-game period stretching back to 1978.

City were significantly better than their rivals when they met in December at Old Trafford, with the 2-1 winning margin not a fair reflection of their dominance.

Liverpool, on a high after their demolition of City, are two points behind United in third ahead of their derby clash against Everton on Saturday.

Victory for Everton at Goodison Park could give United a pre-match boost, with the Merseyside derby kicking off at 12.30pm local time, five hours before the Etihad clash.

The early kick-off has irked Liverpool manager Jurgen Klopp, who is unhappy the game comes so soon after their Champions League match.
Having seen Everton taste victory once in the last 22 Merseyside derbies in the league, the home fans won’t be overly confident ahead of Liverpool’s visit.

Klopp’s side have won five of their last six league games, and if they pick up three points on Saturday it would be the first time since 1989-90 that they have managed to win 10 or more away games in consecutive top-flight seasons.

At the other end of the table, Southampton and Stoke City, in 18th and 19th respectively, face tough tasks to escape relegation trouble.
Stoke host a Tottenham Hotspur side (5pm) who are on the longest current unbeaten run in the Premier League – 13 games – and are the only team yet to lose in the league in 2018.

On Sunday, Southampton travel to Arsenal (4.15pm) who have won four games in a row in all competitions.

Chelsea will look to get back to winning ways when they take on London rivals West Ham United (Sunday 6pm) desperate to keep their fading top-four hopes alive.

Crystal Palace will aim to pull clear of the relegation zone at in-form Bournemouth (Saturday 5pm) while Brighton & Hove Albion and Huddersfield Town meet on the south coast (5pm) with both still in danger of being dragged into the bottom three.

US Deputy Assistant Secretary of Defence to visit Greece and Cyprus