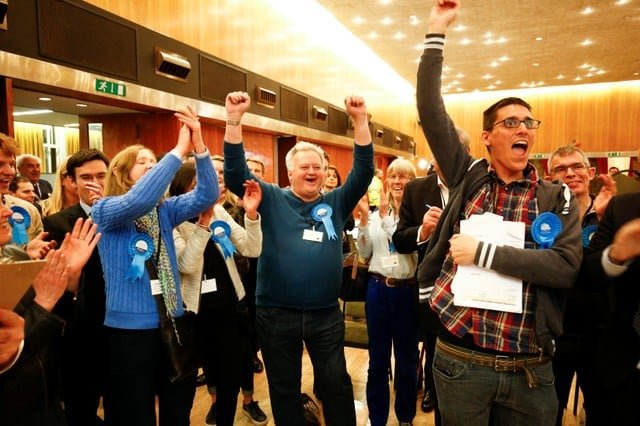 Prime Minister Theresa May’s Conservative Party avoided a wipeout in London local elections and eked out gains in Brexit-supporting regions elsewhere, early results on Friday showed, although her Labour opponents did gain ground in the capital.

The elections are viewed as a gauge of public support for May as she faces a possible revolt in parliament over her strategy for leaving the European Union.

Partial results showed May was likely to avoid the kind of widespread losses that would dramatically weaken her authority over Conservative lawmakers ahead of key tests of her plans to pull out of the EU customs union.

May’s party held onto control of Wandsworth council – a low-tax Conservative stronghold since the time of former prime minister Margaret Thatcher. The council had been one of the socialist-led Labour Party’s more ambitious targets in Thursday’s vote.

Votes will decide more than 4,400 council seats, determining the makeup of 150 local government authorities who are responsible for the day-to-day provision of public services.

They do not affect seats in parliament, where May has only a slim working majority thanks to a deal with a smaller party.

The Conservatives also held the symbolic council of Westminster in the heart of London’s political district, indicating that the final scale of losses in the capital would come in at the lower end of the predicted range.

Despite retaining overall control, the Conservatives lost individual seats in Westminster and Wandsworth.

FIVE COUNCIL RESULTS THAT SET THE TONE FOR THE OVERALL OUTCOME

More than 4,000 council seats will be contested, determining the make-up of 150 councils. More than 40 percent of the seats are in London.

All 32 London boroughs are electing their whole councils. Some councils outside London are only electing one third of their councillors this time around.

Unlike national elections that decide seats in parliament, or the 2016 EU referendum, Thursday’s elections are open to EU nationals registered and resident in electing boroughs.

The Conservatives won the single extra seat they needed to take overall control of this council which represents an eastern area that voted 61 percent to leave the EU. The anti-EU UK Independence Party lost its only seat on the council as part of a broader collapse in the party’s vote.

A council in the northern city of Manchester which had been the Conservatives’ highly prized foothold in a region dominated by the opposition Labour Party. The Conservatives lost five seats, while Labour gained four, leaving the council without a single party in overall control.

A hotly contested Conservative borough in southwest London with a tradition of low taxes dating back to former prime minister Margaret Thatcher. Labour gained seats on the council, but the Conservatives held enough to keep control.

The Conservatives lost three seats on this symbolic council at the heart of London’s political district but retained overall control by a wide margin. It has been run by the Conservatives since its creation in 1964.

YET TO BE DECLARED

BARNET – A London borough which Labour has never won since its creation in 1974, Barnet is a big target this time around. The result here will illustrate the extent to which a row between Labour and the Jewish community over the handling of anti-Semitism in the party has affected the public mood. Barnet has the highest proportion of Jewish residents in England at 15.5 percent, according to the latest census data.

Ruling parties typically suffer losses at local elections and polls ahead of the vote predicted a bad night in London for the Conservatives after eight years in power. May is also negotiating an exit from the EU that 60 percent of the capital rejected at the 2016 Brexit referendum.

Results elsewhere in London’s 32 boroughs showed the forecast swing to Labour in the capital had materialised, although not strongly enough to inflict the heavy losses that would pose a serious headache for May.

Outside London, the Conservatives regained control of councils in the pro-Brexit regions of Peterborough and Basildon, largely at the expense of the anti-EU UK Independence Party (UKIP).

UKIP has suffered leadership issues and struggled for a new purpose since achieving its primary political aim at the 2016 Brexit referendum when Britons decided to leave the EU.

But May’s party lost control of the highly prized council in the Trafford area of the northern city of Manchester – its only foothold in an important Labour-dominated economic region where the Conservatives have spent years trying to win support.

The overall tally, due around 1900 GMT, will offer the most complete snapshot of public opinion since an election last year in which the Conservatives suffered unexpected losses, leaving May weakened and her party arguing openly about Brexit.

May will remain under pressure from rival Conservative factions: those who want to keep close ties with the EU by staying in the customs union, and others who say anything short of a clean break is a betrayal of the Brexit referendum result.

That issue is expected to come to a head with at least one vote on it in parliament next month.

UK economy begins tepid recovery in May after record slump