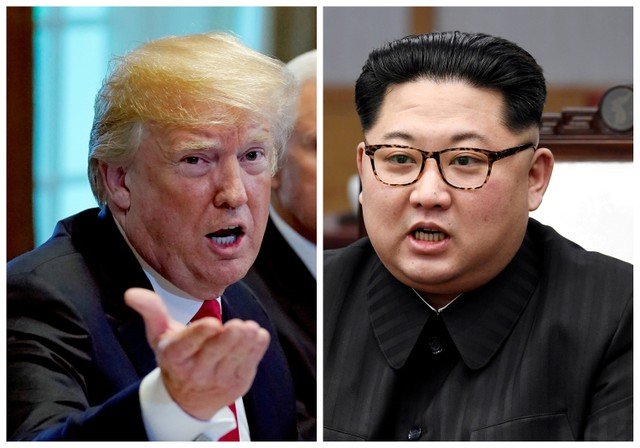 US President Donald Trump will deploy a mix of charm and pressure to coax North Korean leader Kim Jong Un into a deal to give up nuclear weapons, trusting his gut instinct over briefing books in his ability to strike an accord, aides and former administration officials said.

Kim, who at 34 is nearly half Trump‘s age, will get a concentrated blast of what friends and foes of Trump have experienced since he became president: a volatile, unpredictable leader who can be at turns friendly or tough, or both at the same time.

The June 12 summit in Singapore will be the first face-to-face meeting between Trump, the former reality TV star who likes to keep people guessing up to a cliffhanger finish, and Kim, the heir to a reclusive dynasty with a history of reneging on promises to curb its nuclear ambitions.

While Trump has received a steady diet of briefings, verbal and written, about what to expect when he meets Kim, he trusts his intuition more than anything else, aides and former officials said.

His briefings have covered the gamut from Kim’s family history, the history of broken agreements with Pyongyang and the status of the North’s nuclear and missile programs, one source familiar with the matter said.

Aides expect Trump to try to use a personal touch to try build trust with Kim. The two leaders have done much to improve their relations after hurling insults and threats at each other such as who has the bigger nuclear button.

In his decades as a businessman before entering the White House 18 months ago, Trump did many deals and can bring different skills and techniques to negotiations, one source close to the president said.

“But it’s very ‘gut,’ which people are not used to in the diplomatic world because people are used to reading note cards,” said the source, who spoke on condition of anonymity.

Critics contend that Trump‘s seat-of-the-pants approach may be too risky in dealing with North Korea, which alarmed Washington with its rapid advances on a long-range missile possibly capable of hitting the United States.

Trump has said his meeting with Kim is a get-to-know-you session and could be the first of several aimed at getting North Korea to scrap its nuclear arsenal.

Trump is preparing for the summit and taking it very seriously, said a senior White House official who asked not to be identified, “but locking himself away and doing what’s been done in the past clearly hasn’t worked.”

Trump himself said on Thursday that he did not think he had to prepare very much and that “it’s about attitude. It’s about willingness to get things done.”

Other US officials have questioned whether Trump is doing enough to get up to speed.

US Secretary of State Mike Pompeo came back from meeting Kim in Pyongyang to describe the North Korean leader as “a smart guy who’s doing his homework” for the summit, according to one US official familiar with the matter.

However, the senior White House official pointed to Trump‘s relationship with Chinese President Xi Jinping as a sign of how he might deal with Kim: Trump frequently talks about how close he is to Xi, but this has not stopped him from talking tough on trade with Xi.

One former senior administration official who has watched Trump engage with world leaders said he has not had a consistent method in diplomatic dealings, describing him as “kind of all over the map” at times hectoring, at others friendly.

On Thursday, Trump dangled the prospect of inviting Kim Jong Un to the White House if he deemed the summit a success while also signaling he was willing to walk away if he thought talks did not go well.

Trump goes to Singapore confident in his deal-making skills based on his career as a New York real estate developer, which made him a billionaire.

His negotiating skills as president have had mixed success: his attempt to negotiate a healthcare deal with lawmakers fell apart last year, but then he was able to get tax-cut bill through Congress.

On the foreign policy front, his hardline stance on China to cut its massive trade surplus with the United States has risked a trade war, while talks to overhaul the North American Free Trade Agreement have stumbled badly.

But that is not likely to deter Trump from his negotiating style.