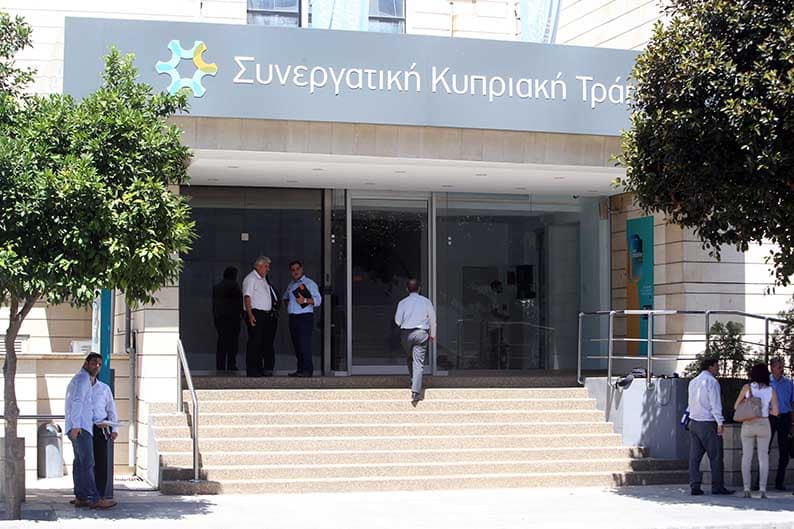 Unions Sek, Peo, and Pasydy said on Friday they want to make a final attempt at dialogue with the finance minister and the Co-op bank’s directors to overcome an impasse on a voluntary retirement scheme.

“We invite the owner and the board of the bank to not take any unilateral action, which would cause direct and dynamic reactions from the workers,” the three unions said in a statement.

The Co-op bank employees are represented by a fourth union as well, Etyk, who in an announcement on Thursday said that they might strike.

Sek, Peo, and Pasydy however, said they wanted to make a ‘final attempt to overcome the impasse’, between them and the bank.

Issuing an ultimatum however, the three unions said that they would call a meeting on July 25, to decide on measures to be taken, if their were no positive developments as of next Tuesday.

On Thursday, the Cyprus Cooperative Bank, which had to sell its operations to Hellenic Bank after it failed to sufficiently reduce its non-performing loans stock to remain in business, agreed to compensate 900 workers who will opt to benefit from the scheme a minimum compensation of €20,000 and up to €170,000 per employee.

A meeting of the Co-op’s management failed to bridge the gap, as Etyk, one of the four unions participating in the talks, is insisting on minimum compensation of €100,000 with a €200,000 cap, a participant who spoke on condition of anonymity said in a telephone interview on Friday.

“In the meeting we once again warned that in case colleagues are directly or indirectly pressured or blackmailed to benefit from the scheme, our organisation will not hesitate to take measures including striking,” Etyk said in a statement on its website on Thursday.

Government spokesman Prodromos Prodromou on Friday morning said in an interview with state-radio CyBC that if there is no agreement, Co-op workers may be declared redundant and take a fiscal hit of about one third of the offered scheme.

Taxpayers recapitalised the Co-op for €1.7 billion in 2014 and 2015 and the government issued €3.2bn in bonds in favour of the Co-op last week, with which it will acquire its non-performing loans and other assets after the deal with Hellenic Bank is completed.

Hellenic Bank has agreed to employ 1,100 Co-op workers after the deal is completed. About 500 of the less than 2,700 workers of the state-owned bank will continue working for the residual body that will be tasked with collecting the bank’s €7bn non-performing loans, and at a later stage loans acquired from other banks.

Etyk was also angered by a Thursday statement from the Employers and Industrialists Federation, known as OEV, which criticised it over its intransience.

“Why is OEV referring to just one union?” Etyk asked in its statement.

The bank workers’ union, which is known for its harsh rhetoric, insisted that its positions were not different from those of the three others.

In a telephone interview, Michalis Antoniou, OEV’s managing director said he was optimistic that ‘the wisdom displayed by the major unions will allow a consensual outcome without resorting to extreme action’.

No respite for the island’s fire services, respond to Nicosia district outhouse fire