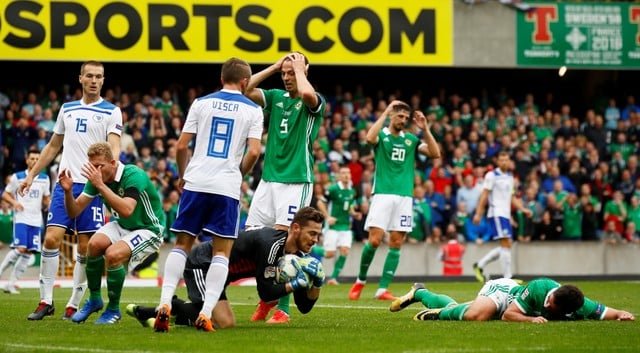 Northern Ireland’s Nations League campaign got off to a frustrating start as they lost 2-1 to Bosnia and Herzegovina despite dominating the match.

Michael O’Neill’s side continued to struggle in front of goal as they failed to make 67 per cent possession count until Will Grigg’s stoppage-time strike, having been hit twice by a Bosnia side who rarely got out of their own half.

Haris Duljevic opened the scoring in the 37th minute, slipping the ball home from close range with only Bosnia’s second attempt on goal, and Elvis Saric capitalised on a mix-up between Craig Cathcart and Bailey Peacock-Farrell to effectively seal it in the 64th minute.

It was a disappointing end to a game which might have been different had referee Pavel Kralovec awarded a penalty in the opening minute when George Saville tumbled under a challenge from Ervin Zukanovic.

But it was nevertheless a positive start from the hosts, who kept Bosnia camped in their own half for most of the opening 25 minutes.

Niall McGinn fashioned himself a fine chance as he cut in from the right but shot straight at Ibrahim Sehic before Conor McLaughlin’s low cross eluded the outstretched boot of Saville by inches.

Northern Ireland continue to press forward with Davis hitting a shot over while Jonny Evans saw a weak header held by Sehic from a corner.

Leeds goalkeeper Peacock-Farrell could hardly have wished for a quieter opening to his first competitive start, with the 21-year-old’s first involvement of note coming when he blocked Edin Dzeko’s close-range effort in the 32nd minute.

It was the first serious foray forward from the visitors but a warning that Northern Ireland did not heed.

Five minutes later Dzeko, earning his 94th cap to equal the record of Emir Spahic, sent in a low cross and Duljevic turned it home.

Northern Ireland struggled to muster a response as the Windsor Park atmosphere became muted, leaving O’Neill with work to do at half-time.

The manager seemed to have found the right words as Northern Ireland started the second half firmly on the front foot.

Stuart Dallas had a glorious chance in the 48th minute but could not make a proper connection as McGinn’s cross found him in front of goal.

When Oliver Norwood sent in a free-kick from the left, Kyle Lafferty met it at the far post to force a save out of Sehic, with Saville’s effort on the follow-up blocked.

But it was the same story again as Northern Ireland’s endeavours came to nought and they were hit with another sucker-punch as Bosnia scored out of nothing.

It should have been a routine header back from Cathcart but he and Peacock-Farrell were not on the same wavelength, allowing Saric to nip in and score.

O’Neill responded by sending on strikers Grigg and Liam Boyce in place of Lafferty and McLaughlin, but for all Northern Ireland’s endeavours Bosnia looked the more likely to score on the break, with Duljevic hitting the outside of the post with a curling effort as he cut in from the left.

Northern Ireland kept trying though. The ball bounced kindly for Saville in the 84th minute but his shot was blocked while a poor clearance from the goalkeeper set up Boyce, but his low drive was saved.

Grigg finally got Northern Ireland on the scoresheet in stoppage time with a neat hooked volley from Boyce’s header down to set up a frantic finale.

The ball almost fell for the Wigan striker again from another corner but Sehic smothered the ball to leave Northern Ireland defeated.

Cyprus concedes more needs to be done on Greco recommendations

Banks given until Monday to find solution to wrongly offset accounts