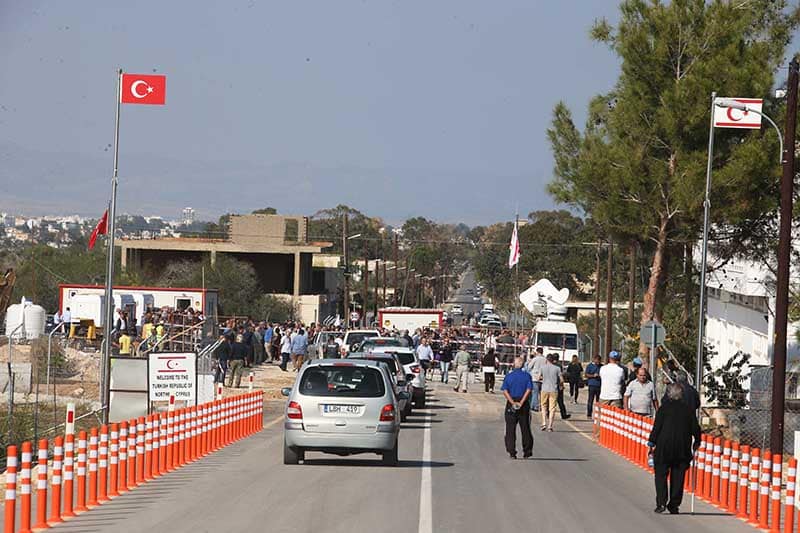 Traffic across the Dherynia crossing has been smooth with no problems, the town’s mayor said on Tuesday 24 hours after the checkpoint was opened.

“Civil society responded positively [to the opening of the crossing point] and had gathered there early in the morning waiting for the checkpoint’s opening at noon to cross over to the north,” Dherynia mayor Andros Karayiannis told the Cyprus News Agency.

“Many people went across to take a look at their homes in Kato Dherynia or by the side of the three-kilometre road leading into the north,” he said.

For many, he added, it was an emotionally charged experience.

“People seeing their deserted home for the first time in 44 years stood outside and wept, taking pictures and reminiscing with family members about the times they had before the Turkish invasion.”

According to the mayor, from noon on Monday, when the crossing point was opened to the public, to 8pm of the same day, some 1,000 people on foot and around 500 vehicles crossed from the south to the north.

Citing police statistics, he said that from midnight Monday until 12 noon on Tuesday, 98 Turkish Cypriots and 67 foreign nationals walked into the south from the north, while 79 vehicles made the crossing.

He said Greek Cypriots going across on foot or bicycles are only asked to flash their ID. Their data is not logged. By contrast, Turkish Cypriots and foreign nationals (EU and non-EU) as well as Greek Cypriot and Turkish vehicles are logged and counted by the police.

Karayiannis said several Turkish Cypriots crossing over on foot did some shopping in Dherynia. On their way back, they were given a ride by Greek Cypriots in their cars heading the other way toward the checkpoint.

The same went on on the other side, with Turkish Cypriots offering to drive Greek Cypriots returning to the south.

Responding to questions, the mayor said that his municipality would again request permission from the north to operate a church in Kato Dherynia located near the crossing point.

On the ongoing road works close to the checkpoint, he explained that a parking space would be built there.

On Monday, and three years after Cypriot leaders agreed to open two more checkpoints, crossing points were opened at Dherynia on the east coast and Lefka-Aplikli some 50km from the capital.

The two openings on Monday, which took place at noon, bring the total crossing points to nine along the island’s 180km buffer zone.