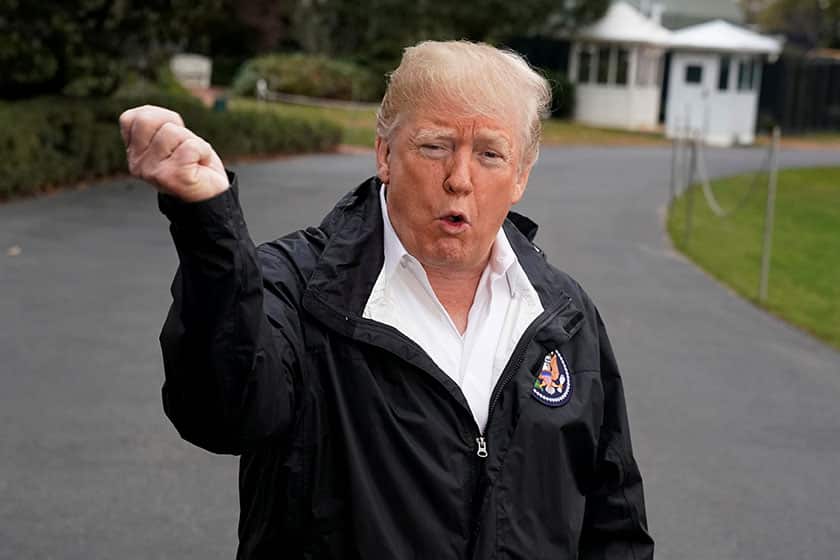 “It’s a suffering tape, it’s a terrible tape,” the Snowflake-in-Chief told Fox News on Sunday, defending his refusal to listen to the recording of journalist Jamal Khashoggi being murdered and sawn into pieces in the Saudi Arabian consulate in Istanbul on October 2. “I know everything that went on in the tape without having to hear it. It was very violent, very vicious and terrible.”

At least five weeks after the Turks made the recording available to American intelligence, Donald Trump has finally admitted that it exists. (It only exists because the Saudi hit team who did the murder were so amateurish that they didn’t even sweep the consulate for bugs.)

But Trump’s purpose in going on Fox was to say that the man who almost certainly ordered the hit, Saudi Arabia’s Crown Prince Mohammed bin Salman (MbS), is still his friend and ally. “It could very well be that the Crown Prince had knowledge of this tragic event – maybe he did and maybe he didn’t,” said Trump, but “the United States intends to remain a steadfast partner of Saudi Arabia.”

Fair enough. We all have to consort with murderers and torturers occasionally as we go about our business. But this relationship between Trump and MbS, genuinely warm and yet deeply cynical, does offer us an entry-point into the weird pseudo-strategies that bind the White House and the Saudi leadership together.

The focus of the US-Saudi relationship for the past four decades has been shared enmity towards Iran. This is perfectly natural for Saudi Arabia, which faces a far more populous and powerful Iran across the Persian Gulf. The sheer disparity of power, combined with the fact that Iran has a revolutionary regime and Saudi Arabia a deeply conservative one, guarantees that the latter will see the former as a threat.

It’s harder to explain the US obsession with Iran. The mullahs engage in lots of anti-American and anti-Israeli sloganeering, but they are much too sane to act on it. Iran’s ability to project hard military power abroad is so limited that it couldn’t possibly invade Saudi Arabia. It poses no threat whatever to the United States. And yet….

The depth and duration of the American obsession with Iran is best explained not by strategy but by psychology. Iran, like Cuba, overthrew an American puppet ruler long ago (the Shah in Iran, Batista in Cuba) and successfully defied subsequent US attempts to snuff out the revolution. For that, neither country has ever been forgiven.

It is that long-cherished American grudge, not some subtle strategic calculation about potential Iranian nuclear weapons, that drives Trump’s current trade embargo against the country. If he were really worried about nukes, he would be concentrating on North Korea, not Iran.

Both Saudi Arabia and Israel feed Trump’s obsession with Iran, because they would love to entangle the US in a war with that country. Much better to get the Americans to do the fighting, if war is inevitable.

But war is actually far from inevitable, and even Trump’s close advisers (with the possible exception of John Bolton) know that attacking Iran would be a very bad idea. It is, for a start, much bigger than Vietnam.

However, Trump himself seems to have drunk the Kool-Aid. He prefaced his statement about sticking with Saudi Arabia despite the Khashoggi murder with a rant about the evil Iranians who are allegedly waging “a bloody proxy war against Saudi Arabia in Yemen”.

Despite constant claims that the Houthi rebels in Yemen are just a front for Iran (for the most part swallowed uncritically by the Western media), there are no Iranians in Yemen, and no Iranian weapons either. On one side there are Houthi fighters and the home-made, hopelessly inaccurate missiles that they occasionally fire at Saudi cities in retaliation for the huge, relentless bombing campaign by the Saudi-led ‘coalition’.

On the other side is the aforesaid coalition, the military wing of Arab Military Dictators and Absolute Monarchs Inc., plus some mercenaries that the United Arab Emirates has hired to stiffen the local pro-government forces. And MbS waded into Yemen almost three years ago to put that ‘government’, installed by the Saudis in 2012 without an election, back into power.

There’s not an Iranian in sight anywhere. The geography alone makes the claim utterly implausible. How could this farrago of shameless lies and distortions be repackaged into a casus belli for an American attack on Iran?

So yes, the Yemen war, creatively reinterpreted, could indeed be used by MbS and Trump to justify an American attack on Iran. It is said that war is God’s way of teaching Americans geography, but the wars always come first.