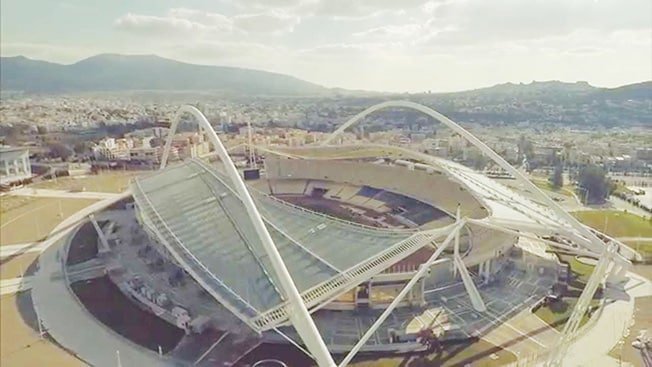 Greece has already announced it would modernise its Olympic stadium (above) while Serbia planned to build a new 60,000-capacity stadium

A bid by Balkan countries to host the 2030 Fifa World Cup would have a realistic chance because the governments of Bulgaria, Greece, Serbia and Romania would offer support for the joint candidature, Bulgaria’s Sports Minister Krasen Kralev said on Wednesday.

No Balkan nation has hosted the World Cup and last month’s announcement raised eyebrows given the poor sports infrastructure in the region but former long-distance runner Kralev said it was an achievable target.

“Оur bid is completely realistic, we are aware that we have to meet a number of FIFA criteria,” the 51-year-old Kralev told Reuters. “Let us remind you that Russia also began building the necessary sports infrastructure after being named host of the 2018 World Cup.”

The Balkan quartet will also bid to host the European championship in 2028, hoping that would give them a chance to improve or build new stadiums.

Kralev said that Greece had already announced it would modernise its Olympic stadium while Serbia planned to build a new 60,000-capacity stadium.

He said Bulgaria was considering investing some 30-40 million levs ($40.61 million) to renovate the Vasil Levski Stadium and construct a new national stadium in the capital Sofia and two more grounds in other cities.

“The joint bid is an important political sign,” Kralev said. “It shows that the Balkan countries will work together not only in the field of sport but will jointly stand up for their common political and economic interests.

“This is what FIFA is looking for – a political and economic stability. This is the most important thing after the infrastructure.”

World governing body FIFA is not expected to decide the 2030 hosts before 2022, when the World Cup goes to Qatar.

A South American bid involving Argentina, Uruguay and Paraguay has already been announced. Morocco, which has made five unsuccessful bids to host the tournament including 2026, has also said it would try again for 2030 and could be joined by Algeria and Tunisia.

The English Football Association has announced plans to conduct a feasibility study into a joint bid with Northern Ireland, Scotland and Wales. The Irish FA said it would join them in exploring the potential bid.

The 2026 World Cup will be hosted jointly by the United States, Mexico and Canada and Kralev said that the Balkan neighbours already had an example to follow.

“Investments in the construction of roads, airports and sports infrastructure lead to huge profits for each country,” he said.

“Calculation showed that the forecast revenues for the 2026 tournament were $14 billion while spending was expected to be around $3 billion.

“And since final requirements for the 2030 World Cup will be prepared by FIFA no earlier than 2020, we decided to look at the working plan of Canada, USA and Mexico.”

Local media and pundits, including former European Footballer of the Year Hristo Stoichkov, have poured scorn on the bid, saying the Balkan states did not have the financial muscle to compete with richer countries.

The four countries would discuss the bid in Belgrade on Dec. 21-22, Kralev said, adding that Bulgaria might consider bidding to host another major soccer championship if the 2030 candidature failed.

“If we build the infrastructure needed to host the 2030 World Cup, we can apply for each subsequent championship,” he said. “The built infrastructure can be used in the future.”

“The Bulgarian candidacy enjoys serious top-level support at the IOC. Personally, Thomas Bach encouraged us to apply for the Youth Olympics when he came to Bulgaria and saw how we organised at the same time three world championships in Olympic sports,” Kralev said.