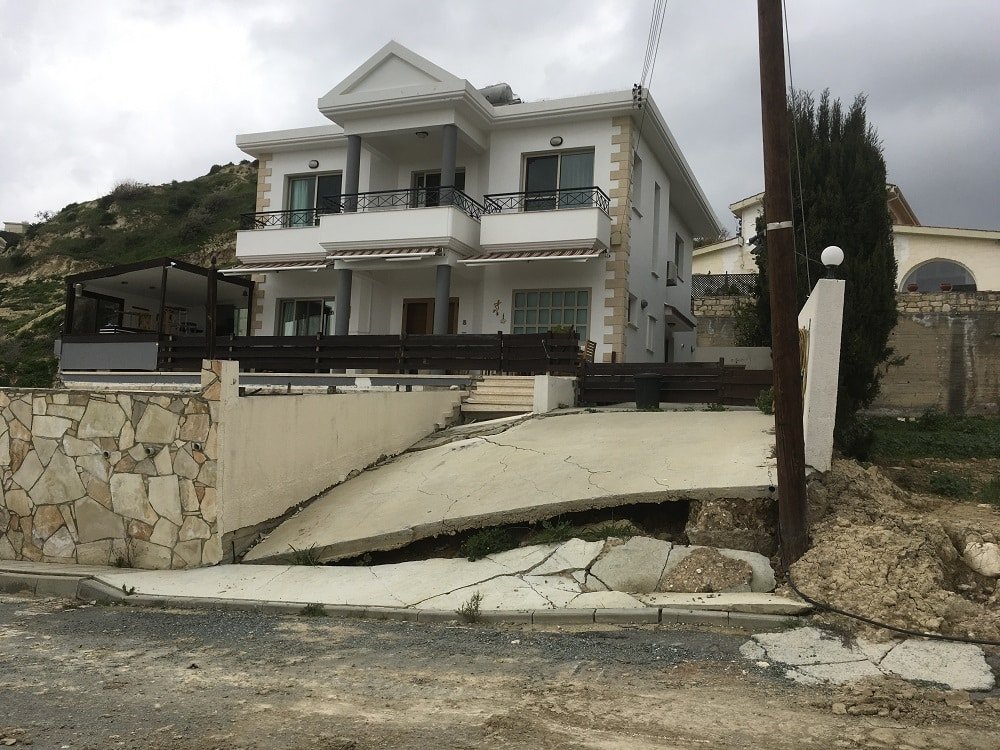 Latest damage, a destroyed driveway at one of the Limnes' houses this week

The longer the government delays taking action the more money it will have to pay, lawyer warns

Owners of crumbling properties in the Limnes area of Pissouri and their lawyer have said they are bewildered as to why a senior government official is finally visiting them, but only after dark and without inspecting their severely damaged homes.

Demitris Syllouris, president of the House of Representatives, will visit Pissouri on Tuesday, January 29 at 6pm, and will hold a meeting at the local coffee shop, according to local homeowners.

Many properties, both houses and apartments, have been split apart, or have bowed walls and collapsed roofs. Gardens and pools have been destroyed. Roads have buckled and fissures in the land continue to appear all over the area. Four families have had to be evicted from their homes.

At issue is the responsibility for the destruction and therefore the cost. Homeowners insist that the developers, of which there were a number, are not at fault and that the problems are due to land slippage, which is a natural disaster and should be declared as such. By law, the government would then have to help the affected people. Despite promises over the years, the authorities have done nothing.

“We are all rather stunned that Mr Syllouris is not coming in daylight to see all of the problems for himself. It has got an awful lot worse in just two days,” said Peter Field who had to abandon his house along with his wife Kayt.

Her husband added that although the affected residents are pleased at the prospect of Syllouris’ visit, they hope he will return in daylight in order to comprehend the magnitude of the destruction.

Syllouris confirmed to the Sunday Mail that he would be visiting Pissouri for what he described as a “preliminary meeting to see what they want”.

“I am visiting Pissouri at the request of some of the MPs. This is not my area. If I can help I will,” he said but would not comment on the timing or extent of his visit.

Elina Zoi, the lawyer for the Fields and a number of other owners including Aristo developers, told the Sunday Mail that the entire point of requesting MPs to come to Pissouri was so that they could understand first-hand the seriousness of the situation, not to sit in a coffee shop and discuss the issue.

She warned that the longer the government delayed in taking action the more money it would have to pay out eventually.

“In 2012, it seemed that three houses and six apartments were affected, in 2018 the entire area above Kimonos Street is now affected, the hill could be in danger of collapse,” she said. “People are still living in homes which are dangerous and it is possible that the other side of the hill could be affected too.”

In 2015, some of the property owners formed the Pissouri Housing Initiative Group (PHIG).

PHIG has paid out thousands of euros for studies and papers from various renowned international experts and satellite imaging, at a cost of 25,000 euros, which measures the movement of the land. According to the study, the movement is up to 40 cm per year, which is a huge amount when pressing against a house.

Field noted that there are different types of landslide and the one in Pissouri is a slow one.

“In the last few days more problems have occurred, for example a number of houses and flats opposite us didn’t have any visible problems and now there is a 6 inch gap in the wall today,” he said.

Another house close by now has a 3 ft high gap at one end of the driveway and it’s worsening daily.

“It’s so frustrating. Our aim was to get the minister to visit the site. The government has to deal with it and we will keep going. Some people need to be rehoused and others given compensation.”

According to Zoi, one affected local family has already moved back to the UK.

“The wife is Cypriot and it was too much for her to cope with that her own government had turned their back on her. Their house was declared dangerous in 2017.”

Zoi described the area as an active landslide which is accelerating.

“It seems as if the state is burying their head in the sand and believe if they avoid actually looking at the damage, It’s not their responsibility. In the last three and a half years, we have extended multiple invitations to the government to come to the area.”

Apart from a handful of officials including Green Party MP, George Perdikis, Giorgos Georgiou of Akel and Yiogos Lillikas of the Citizens Alliance, few have taken up on the invitation.

“It’s not about coming for show they (parliament) need to come and see the destruction and then be able to relay that they have seen for themselves.”

The British high Commissioner to Cyprus, Stephen Lillie, recently visited the site and said that the problems at the Limnes development have been well known for many years.

“As many of the residents are British I wanted to see the problem with my own eyes and to talk to those affected,” he said. “I saw houses, which in some cases are now uninhabitable, and others which soon will be, because the land is moving beneath them. What is impressive is the patience of those I talked to, some of whom are elderly and retired.”

He said that the High Commission had raised the issue with the Cypriot authorities in the past and will continue to do so.

“Like my predecessors I will continue to encourage a practical resolution by talking to the authorities here. What the residents I met were asking for is to be rehoused; they are not looking for somebody to blame.”

Zoi said that the situation had to be resolved eventually.

“I feel very responsible for these people. It’s not just a professional relationship, it’s very personal,” she said.

Lillie said that affected homeowners deserve better than living in places that could, “collapse at any given moment.”

Second-string Spurs knocked out of Cup by Palace

Nine injured in blast in The Hague caused by gas leak