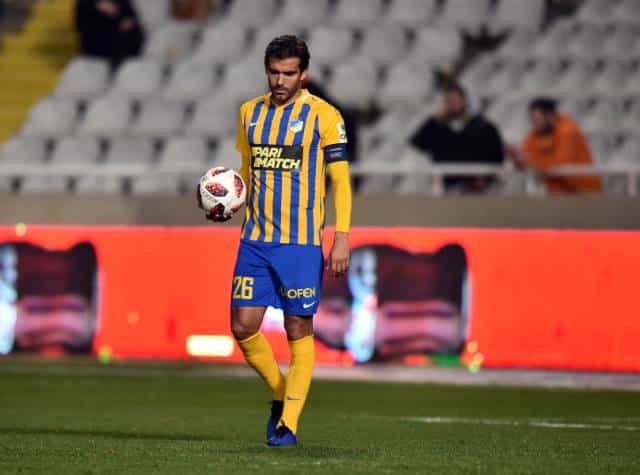 For the first time in recent league history, not one of the top three teams leading the table were able to secure a win over the weekend.

Leaders Apoel and second-placed Apollon went down to Pafos FC and Anorthosis respectively while AEL could only draw at home with AEK.

Apoel suffered their second home league defeat of the season at the hands of Pafos FC who more than deserved their victory. This was also the champions’ second consecutive home game that they failed to win.

Pafos FC produced a display that belies their lowly position. They attacked with frightening speed, often tearing Apoel’s defence apart and when they had to defend, especially in the latter stages of the game, they did so without panicking and shutting out all corridors towards Moll’s goal.

In Nemec, Pafos FC have one of most accomplished strikers gracing the Cyprus league who along with Angulo ran the champions’ backline ragged.
Apoel for the second consecutive game were a shadow of the team that went on an eight-game winning run. Despite cancelling out Caro’s early strike through Nsue they failed to impose themselves on a spirited and skillful Pafos side.

The winner came from Angulo in the 61st minute and even though Apoel missed a penalty for the second straight game to level the score for the second time they hardly deserved to get anything out of the game.

To add insult to injury they also had their manager Paolo Tramezzani sent off and the Italian will now have to watch his team from the stands in the next couple of games.

Apollon missed the chance overtake Apoel as they lost to Anorthosis thanks to Duris’ late first half goal at the Antonis Papadopoulos stadium.

The Limassol side were the better team for most of the game and missed a number of chances to level but the home side’s young Nigerian goalkeeper Uzoho was in imperious form on his debut for Anorthosis, keeping out whatever Apollon threw at him.

AEL also missed the chance to leapfrog over Apoel as they were unable to overcome AEK in a goalless draw but they did move to within a point of the leaders.

Both sides had a couple of chances each in the first half to break the deadlock with the clearer opportunities falling to AEK.
However strikers Giannou and Triscovski failed to beat AEL goalkeeper Prozek when clean through.

In the second half both sides seemed more intent in not conceding rather than gunning for the three points even though AEL could have sneaked it right at the end after a poor mistake by goalkeeper Tonio.

Doxa Katokopias and Nea Salamina played out a goalless draw leaving Doxa the happier of the two teams. A win would have moved Nea Salamina up to foutth place, securing a top-six finish as well.

Despite taking the lead through their leading scorer Ben Kingsley midway into the first half Doxa fought back and equalised through Artamba on the hour mark.

Antoniou and Gozlan gave Enosis the lead while Alki reduced the deficit with a goal by Spoliaric in added time.

In the final game of the round on Monday night, Omonia enjoyed a 2-0 win at Ermis.

WHO and vaccine group back “critical” cervical cancer shots