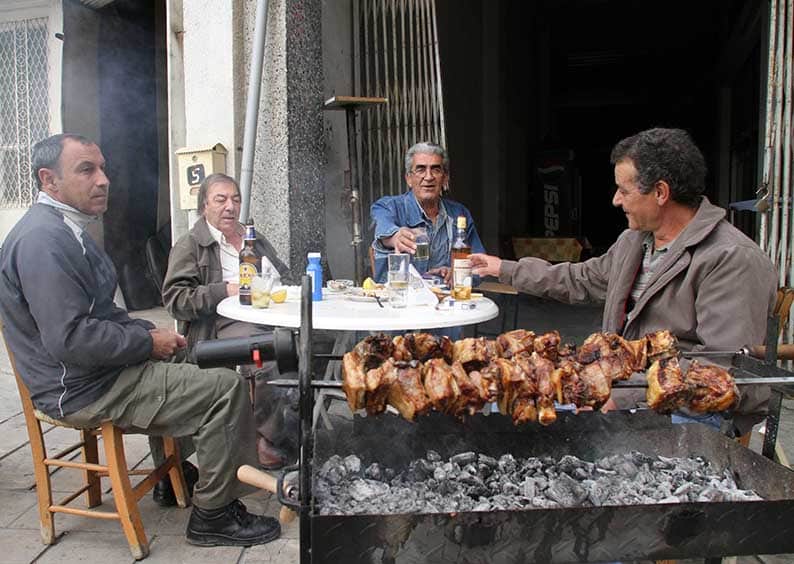 Cypriots consume on average between 24 grammes and 109 grammes of souvlaki or souvla per day depending on age according to the findings of the first national survey of the Cyprus population’s nutritional habits that were announced on Friday.

This tots up to between 8.7kg to 39.8kg a year per person on average from young to old.

The survey was carried out in the framework of the EU MENU project of the European Food Safety Authority (EFSA) that provides independent scientific advice and communicates on existing and emerging risks associated with the food chain.

This is the first official national research on Cypriots’ nutritional habits. Based on EFSA standards, researchers collected what 1,864 Cypriots between the ages of 0 and 74 consume, including 204 pregnant women.

The head of the state lab, Stelios Yiannopoulos, said during a press conference to announce the results, that the aim of the Europewide project is to collect the nutritional habits of the EU member states’ residents so that an assessment can be made on exposure to chemicals and the risks consumers may face through the consumption of foodstuff, but also an assessment on the intake of very important nutrients, which some groups may lack.

He mentioned souvla and souvlaki, which are standard dishes for Cypriot consumers.

According to Yiannopoulos, on average, pregnant women consume 73g daily, people between age 64 and 74 eat 96g of souvla or souvlaki daily, and teenagers between 10 and 17 were found to consume 86g daily on average. The 18 to 64 age group consumes 109g daily, while toddlers and small children eat on average 24g and 42g respectively, he said.

Yiannopoulos said that the amount of souvla consumed on average was found to be within the acceptable levels as regards consumption of polycyclic aromatic hydrocarbons (PAHS) released from the burning of the coal used to cook the popular dish and which can be cancerous.

Souvla and souvlaki cooked on charcoal have on their surface PAHS. The survey on nutrition helps researchers find out the quantity of PAHS each age group consumes and see if they exceed the acceptable daily limit.

If it exceeds it, correctional actions will be made, he said.

He said that the research showed that Cypriots are within the acceptable levels as regards souvla consumption, but that an assessment must also be made on how much meat each person eats and whether their health is at risk.

Health Minister, Constantinos Ioannou said that healthy nutrition is a top priority. He said that the conclusions of the Council of the European Union of the last 10 years on nutrition and physical activity and the Action Plan on Obesity, recognise both the benefits of prevention for both citizens and national health systems but also the importance of healthy diets in reducing the risk of chronic and non-communicable diseases.

Ioannou said his ministry encourages and promotes through a series of actions the adoption and implementation of healthy practices regarding the consumption of food.

Through research projects, it also seeks to collect objective and reliable nutrition information so that it can inform and educate consumers on how they can set they can choose what type of foods to put on their plates.

The health ministry will be in a position to utilise the results of the research to formulate a policy on the nutrition of the Cypriot population, as well as a strategy for conducting epidemiological studies and health promotion actions.

“Our goal is, among other things, to plan even more targeted food control programmes on the Cypriot market,” he said.
Cyprus is one of the first EU member states to complete the national research on nutritional habits.