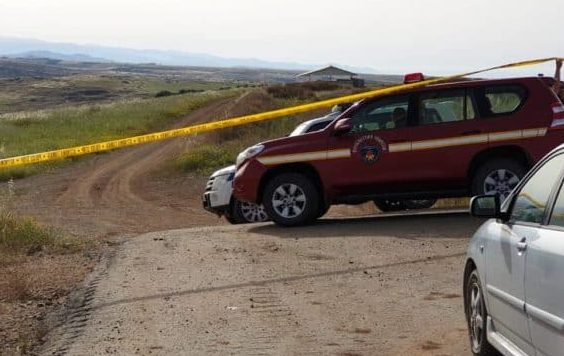 Police on Thursday found the body of a woman at a firing range at Orounta after they were led there by a 35-year-old man held in connection with two other murders, as media reports citing police sources suggested that the number of victims linked to the same suspect could be as many as seven.

State pathologists examined the scene at Orounta. Reports said the body – as yet not positively identified – was badly decomposed.

The suspect has allegedly admitted to killing 30-year-old Maricar Valdez Arquiola who has been missing since December 13, 2017 – but it was not clear whose body might lie in the pit at the firing range.

It was likewise unclear whether the body belonged to any of the women on the police list of missing persons.

“Inquiries continuing today located a body …a woman, after details obtained from the suspect,” a police source told Reuters, requesting anonymity since investigations are ongoing.

The sources said he gave police details of an additional victim, “either Indian or Nepalese” killed in the summer of 2018. He also confessed to killing a Romanian woman and her under-aged daughter, the police sources added.

Nicos Metaxas, the suspect, is said to have also confessed to killing two other Filipino women whose bodies were found in a shaft at the Mitsero mine, 14 km from the site at Orounta.

The six-year-old daughter of one of the women has not been found either.

Reports on all Greek Cypriot media reported later on Thursday that the suspect had broken under questioning and confessed to seven murders; the three Filipino women and the daughter of one, another woman either from India or Nepal last summer, and a woman from Romania and her daughter at a time he did not specify, the reports said. This has not been confirmed.

The Romanian mother and daughter, 8, were reported missing in October 2016. They were never found after being last seen on September 30 that year.

Thirty-six-year-old Livia Florentina Bunea from Romania and eight-year-old Elena Natalia Bunea had been reported missing from their Ayios Pavlos home on September 30, 2016.

An acquaintance of theirs told the state broadcaster that when at the time friends became concerned at Bunea’s disappearance, they entered her apartment to find it unkempt, with unwashed utensils lying about in the kitchen while all the clothes were still in the drawers.

Officially, as it now stands four of the investigations are murder probes. The rest concern missing persons with suspicion of foul play.

In court hearings, police said the suspect was suspected of having approached the dead women on an online dating site.

Earlier in the day, Metaxas was remanded in custody in connection with the suspected murder of a woman, the third so far in what appears to be Cyprus’ first recorded serial murder case.

Police told the court that Metaxas, a captain in the National Guard, was suspected in the premeditated murder of 30-year-old Filipina Maricar Valdez Arguiola, reported missing on December 15, 2017 by her mother.

Investigators said they had found photos of Arguiola at the suspect’s home in Nicosia. They also said that he had met Arguiola two days before she had been reported missing.

Lead investigator Ioannis Yiorkadjis told the court that Arguiola had told friends she was going to meet the brother of her deceased partner, though evidence shows that she had met with Metaxas.

The suspect has reportedly admitted to meeting with Arguiola, but not of killing her.

The court remanded the suspect for two days, as police said they wanted previous remand orders to expire on Saturday before requesting his detention anew. Metaxas, who appeared in court without a lawyer, did not object.

Five statements have so far been gathered in connection with Maricar’s case, Yiorkadjis said, noting that over 50 more are expected in the coming days. The bulk of information being contributed by the public has also proved crucial, he said.

Police will be carrying out a fresh search for genetic evidence in the home and two cars of the 35-year-old.

Metaxas is in custody for the murders of two other Filipinas whose bodies were found naked and bound in a shaft of the abandoned Mitsero mine. The body of Mary Rose Tiburcio, 39, was found on 14 April; a week later search crews retrieved another body, thought to be that of Arian Palanas Lozano, 28.

Metaxas is also suspected of killing Tiburcio’s six-year-old daughter Sierra. For the first time in court on Thursday, police used the word ‘murder’ when referring to the fate of the little girl. Up until now, she had only been presumed dead.

Earlier in the week, Metaxas allegedly admitted he had strangled Tiburcio in his home before dumping her in the mine shaft. While in his confession he denied killing the six-year-old, he told police that he did dump her body in lake Memi, at the Xyliatos reservoir area, some 15 minutes’ drive from the mine.

Following the suspect’s link with the third woman, police said they will be re-examining the data of the first two murders.

Authorities are continuing the search for possible additional bodies in the mine shaft and for Sierra in the lake, 95 per cent of which they said has already been searched, though nothing was found. After days of inconclusive searches in the lake, police said they will be using specially-trained divers as of Friday. All of equipment is already onsite.

Back at the mine, the fire service said they found no signs of additional dead bodies in the water-filled shaft.

Fire chief Marcos Trangolas said the entire shaft had been searched and “nothing has been found to suggest there is a body.”

Using a robotic camera, crews had completed a search of the shaft by 95 per cent on Wednesday. On Thursday they spent at least two hours sweeping the last 10 metres, finding a suspicious object at a depth of 123 metres.

It proved to be a piece of canvas used back in the day as part of the mine’s ventilation system.

On Wednesday, police spokesman Andreas Angelides had said police had searched for the six-year-old in ten different areas that included Mitsero and the lake at Xyliatos. An 11-man team of detectives were working on the cases, he said.

An administrative inquiry is to be launched to establish potential disciplinary or criminal offences by any member of the police force in earlier investigations which failed to find women reported missing and who were never located.

Serial killings are virtually unknown in Cyprus and the breadth and scope of the murders have shocked the public.

The victims and other possible victims

TO DATE, police are investigating the cases of seven persons who went missing and who may have been murdered. All are women.

The only body that has been positively identified is that of Mary Rose Tiburcio, 39, a Filipino national.

The other missing persons and potential murder victims are:

Sierra, Tiburcio’s six-year-old daughter; her body has not been found.

Ariana Palanas Lozano, 28, from the Philippines.

An unidentified woman – said to be from Nepal or India – whose body was found in a firing range in Orounta on Thursday, the location pointed out by the suspect in custody.

Amnesty: US killed 1,600 civilians in Raqqa