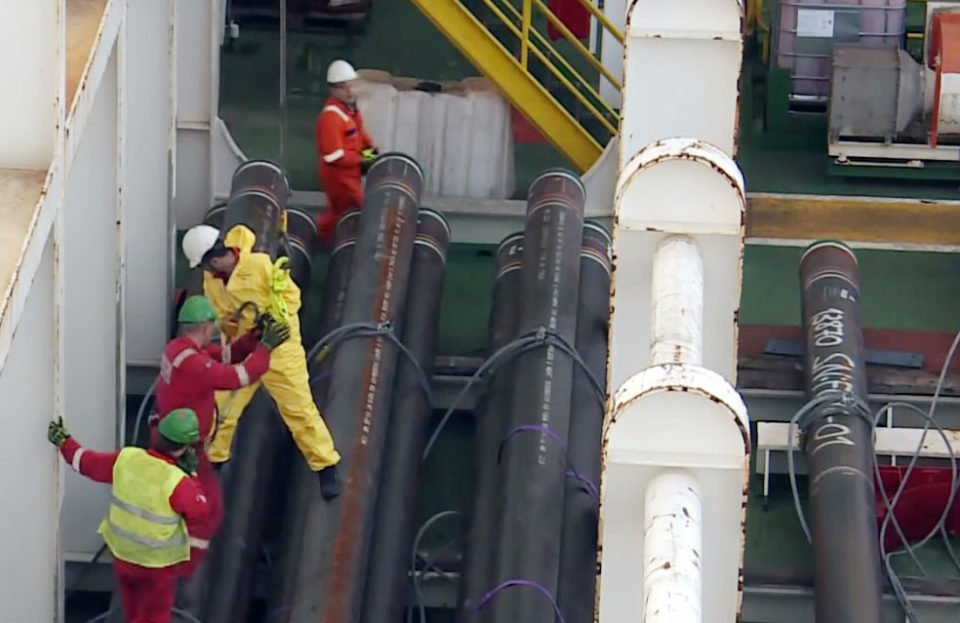 Workers aboard the Fatih

Turkey’s activities in the region are an indication of its weakness and isolation, Greek Prime Minister Alexis Tsipras said on Wednesday.

Speaking on OPEN TV, the Greek prime minister argued that the moves of Greece and Cyprus, and the alliances that have been built in recent years with neighbouring countries, had led to a strategic impasse for Ankara.

“Turkey has no strong alliances. She sees she cannot claim her differences with Cyprus are a bilateral issue, as with Greece,” Tsipras was quoted as saying.

“The EEZ [exclusive economic zone] of Cyprus is also Europe’s EEZ, the borders of Greece are also borders of Europe,” he said, adding that Athens and Nicosia are in constant cooperation.

Regarding the possibility of a military incident with Turkey, Tsipras stressed that such things are always possible and that was why the Greek government was taking the necessary measures.

He underlined that Greece had strong armed forces and noted that Greek citizens could sleep peacefully.

“But this is not enough, they need the strong alliances that Greece has developed. This is demonstrated by the reaction of the US and the EU and the possibility of taking concrete measures against Turkey is open,” he added.

At the same time, Tsipras expressed the conviction that Turkey would not put a second drilling rig in the area between Kastelorizo and Cyprus, but in any case, there was a deterrence plan, he said. “Greece will not back down.”

Cyprus and Greece are heaping pressure on the EU to take action against Turkey over gas drilling west of the island, as Ankara said on Tuesday it would step up exploration.

President Nicos Anastasiades left for Brussels on Wednesday to attend the European Council meeting Nicosia hopes will decide on measures to counteract Turkish activities in the island’s EEZ over the coming two days.

A Turkish drillship, the Fatih, has been anchored west of Cyprus since early May and recently began drilling. Ankara said Tuesday it was would be sending a second ship, Yavuz on Thursday to drill in areas of the EEZ claimed by Turkish Cypriots.

Turkish Foreign Minister Mevlut Cavusoglu said on Wednesday the solution to the dispute was “to learn to share”.

“We do not see gas around Cyprus and the Eastern Mediterranean as an issue that separates us, and we do not want to see it that way,” he said.

“Instead we want to enhance the prosperity and stability of the eastern Mediterranean and Cyprus by sharing the resources. There is only one thing we want… ensure the rights of the Turkish Cypriots as guaranteed. It is so simple.”

In addition to the EU, the US and UK have expressed concern over the situation. On Wednesday the UK’s minister for Europe urged dialogue.

“We are following developments in the Eastern Mediterranean with concern. We would like to see the situation deescalated. I raised the issue of Turkey`s planned drilling in waters around Cyprus with the Turkish ambassador in London and the British ambassador to Ankara has engaged with the Turkish Ministry of Foreign Affairs to urge de-escalation,” said Sir Alan Duncan.

“We have been clear with Turkey both publicly and privately that we oppose their plans to drill. We also continue to recognise the sovereign right of the Republic of Cyprus to exploit the oil and gas in its internationally agreed exclusive economic zone”.

Cyprus and Turkey, due to the Cyprus issue, do not have diplomatic relations that would allow for the agreement of a delimitation deal in the dispute area west and south west of the island.

“We believe it is critical for stability in the Mediterranean and for the integrity of the rules-based international system that disputes such as this are resolved not through force, militarisation or coercion, but through dialogue and in accordance with international law,” Sir Alan added.

He said the UK would continue to work with Cyprus and the wider region to that end and urged all parties to look for ways by which the development of the island`s resources could support the search for a settlement for the benefit of all Cypriots.