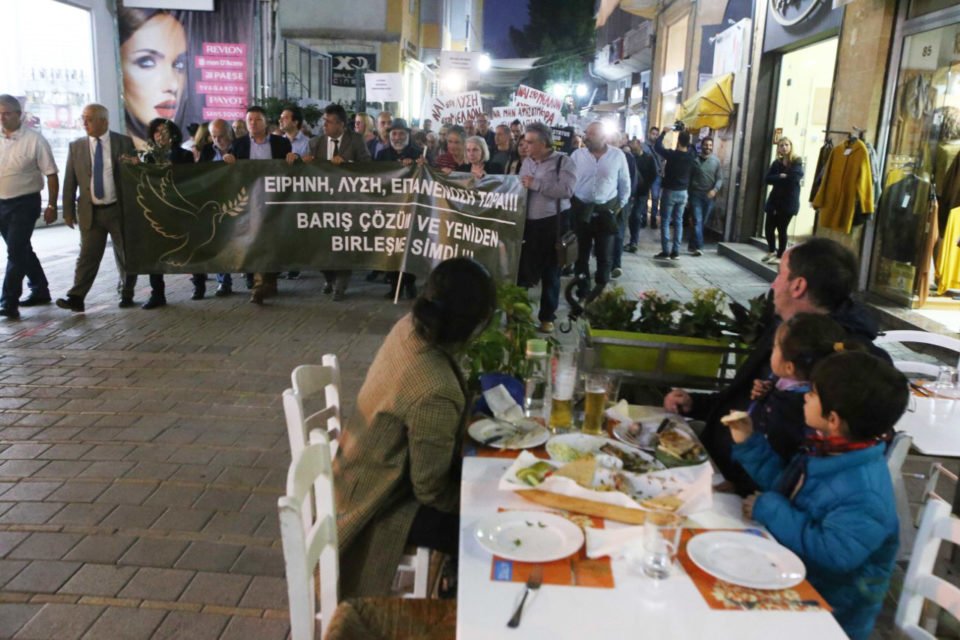 Demonstrators from both sides held a rally on Friday to call on both leaders not to miss the chance being offered them at the Berlin meeting on Monday with UN Secretary general Antonio Guterres to resume negotiations on the Cyprus problem.

During the rally, attended by approximately 500, protesters started from Kyrenia gate in the north before heading to Turkish Cypriot leader Mustafa Akinci’s office before crossing over at Ledra Street and making their way to the presidential palace.

The protesters handed written declarations to Akinci and President Nicos Anastasiades, calling on them to seize the opportunity.

“The Cyprus problem has now become ‘internationalised’, threatening to affect EU stability directly. If Cypriots cannot agree on the terms of reference for a resumption of negotiations, it is clear that others with equally pressing but different interests will dictate the future of Cyprus for us,” bicommunal group and one of the event’s organisers Unite Cyprus Now said in a statement.

During the rally, women threw down shawls in a form of protest, which highlighted an older Cypriot tradition. Protesters said, according to tradition when two men were fighting, it was customary for a woman to step in and throw down her shawl to end the argument.

Protesters also sang songs about Cyprus, which said ‘my country is divided in two’.

The platform also called attention to a recent survey by the European Social Survey group, which showed the majority of Greek Cypriots were against having a two-state solution.

“A recent survey of 800 people by the prize-winning European Social Survey (ESS), one of the most respected social surveys in the world, showed that 72.4% of Greek Cypriots reject a two-state solution and more than six in ten said they could accept a bizonal bicommunal federation.”

Regarding the Turkish Cypriot community, the World Bank Pulse of Reunification survey published in May found that well over 60 per cent of Turkish Cypriots found a bizonal bicommunal federation acceptable and well over 50 pe cent would vote Yes if a referendum were held tomorrow.

Unite Cyprus Now said: “The people are ready for a solution. Let us all heed the words of the UN Secretary-General Antonio Guterres, that maintaining the prospects for peace ‘ultimately lies in the hands of the two sides’.”

The two leaders are to meet Guterres in Berlin on Monday in a bid for progress on the terms of reference for the resumption of talks, which is expected to pave the way for an informal five-party meeting with the participation of the guarantor powers Greece, Turkey and the UK.

Government sources however, have recently been quoted as saying Nicosia does not expect much progress at the trilateral due to Turkey’s reluctance to see developments on the Cyprus problem until after the elections in the north, expected to take place next April.

Anastasiades too, said he did not expect anything to come out of the Berlin meeting based on Turkey’s demands and stance.

Last week, Turkish vice president Fuat Oktay, who was on the island for celebrations in the north to mark the 36th anniversary since the unilateral declaration of independence by the Turkish Cypriots, said that his country would continue its seismic and research activities off Cyprus.

According to media reports in the north, Oktay said that Turkey and the Turkish Cypriots seized every opportunity for the solution of the Cyprus problem but that the Greek Cypriot side averted every chance there was because it is spoiled because of its capacity as an EU member-state.

He also said that Turkey will not be fazed by threats by the international community over its activities in the Eastern Mediterranean and that she would let no one violate the Turkish Cypriots’ rights.

Are ramps found only in palaces Mr President of the House?