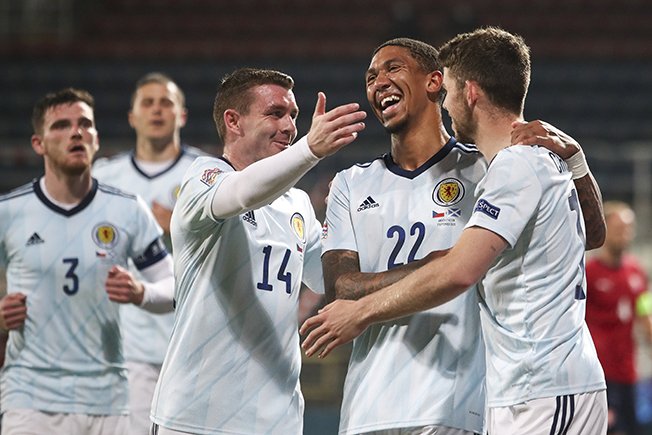 Kenny McLean vowed to savour the occasion as he looks to help Scotland end a 23-year wait for qualification for a major tournament.

The hopes of a nation rest on the shoulders of the players Steve Clarke entrusts in Thursday’s Euro 2020 play-off final against Serbia in Belgrade.

But McLean showed he can handle the expectation when he fired the winning penalty against Israel in the semi-final last month in what was Scotland’s first shoot-out.

After qualifying for four of the five major tournaments of the 1990s, Scotland have endured two decades of near misses and far less glorious failures.

And McLean wants to embrace what is at stake in the Rajko Mitic Stadium.
“You need to enjoy the moments,” the Norwich midfielder said.
“Of course sometimes you find yourself caught up in it a wee bit, but you need to play with a bit of emotion. Obviously not over-doing it, but if you can get that balance right then it’s perfect.

“We have plenty players throughout the squad that have played in big games, pressure games, and this is when it will show.

“We have got match-winners, players that can make the difference. If we can enjoy ourselves, express ourselves, and show the work we have put in in the last year or so with the run we have been on, then the best way to enjoy it is by winning.”

Scotland are on an eight-match unbeaten run ahead of their crucial contest against a side featuring the likes of Lazio midfielder Sergej Milinkovic-Savic and Ajax skipper Dusan Tadic.
“You need to respect the quality they have got, but if you look at the way we have been performing as a unit, you need to be excited going into these games against these top players,” McLean said.

“It’s something that needs to excite you and if it doesn’t then you are in the wrong place.
“Of course there’s a lot of pressure, there’s a lot riding on the game, but you need to enjoy these moments in your career. They don’t come around very often.

“It will be at the top end of what everyone has done in their career if we can get a result in this game. That’s the way we need to look at it. They don’t come around very often.

“It would be the highlight of most of the boys’ careers if we can take us back to the good old days when we were qualifying for tournaments.

“We have got the squad, there is no doubt about that. We have shown that over the last while, it’s just up to us to now go and put the performance in that is good enough to take us there, and give everybody something to look forward to.”

Scotland built on their nervy win over Israel last month with Nations League triumphs against Slovakia and Czech Republic.

McLean said: “Things like that result and the way it went, going to penalties when there’s a bit more pressure on it, to come through that felt better than a normal win. And I think the momentum has just been gathering for a long time now.

Diko MP says he has evidence of migration dept corruption