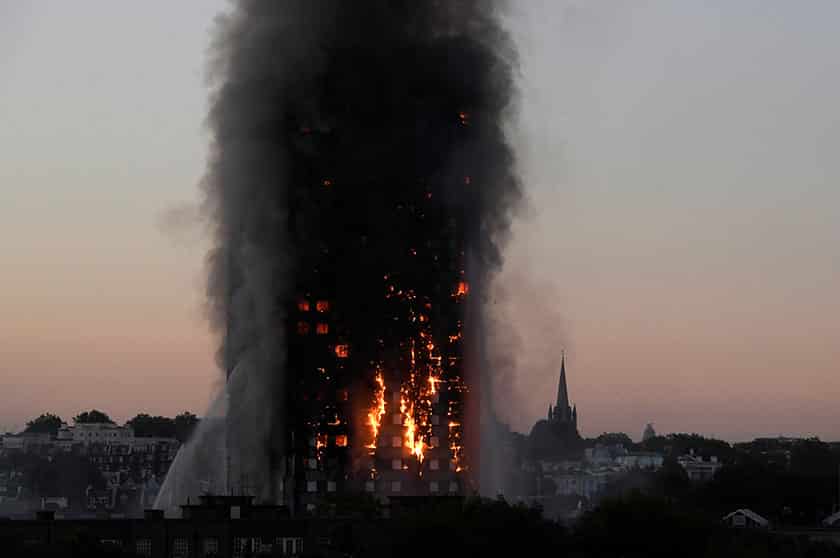 By sheer coincidence, only two days before the June 14 Grenfell Tower fire in London, MPs here were wrapping up discussion of new fire safety regulations for buildings.

And this past Friday, the House plenum voted through the new regulations. Known as the Fire Protection Code of Practice, the 400-page document was inserted into the Streets and Buildings Law, the main law regulating the construction of all building and civil engineering works.

In an emailed response to a Sunday Mail query, Kyriacos Kouros, acting head of the Technical Services at the interior ministry, explained that the updated regulations are the result of meticulous work by the Technical Chamber of Cyprus (Etek) in collaboration with the Fire Department.

The key purpose of the amendments, Kouros said, is to make sure that buildings are designed in a way ensuring that, in the event of a blaze, they can preserve their static resistance for a certain period of time.

In addition, implementation of the new statutory regs aims to minimise the cause of the fire and contain the spread of fire and smoke, both inside the affected building as well as to adjacent structures.

There are also enhanced provisions relating to escape routes and modes of ensuring that rescue teams can operate without facing immediate danger.

In the wake of the disaster at the Grenfell tower block, revelations of shortcomings in construction methods have been coming hard and fast. Inadequate fireproof testing of materials (the now infamous cladding) and the absence of sprinklers in the high-rise are just some of the reveals.

But according to Polys Hadjivasileiou, assistant chief fire officer, fire safety standards in Cyprus are quite strict and in no way lag behind the rest of Europe.

“We inherited stringent practices from the time of British colonial rule, and over the years we’ve updated them with best practices from across Europe, from countries like Germany and others.”

In fact, Hadjivasileiou points out, from his understanding standards in Britain have waned over the years.

“Perhaps Grenfell might never have happened had the British, who in the past used to have excellent standards, not become lax.”

Asked whether during the discussions of the new regulations stakeholders discovered any major deficiencies in the local fire protection regime, Hadjivasileiou said no.

The previous regulations were already very satisfactory and covered all the bases, he added. The updated ordnances mostly relate to changing the method of doing things from now on.

For example, previously the task of certifying a building’s fire safety fell on the Fire Department. The architect or civil engineer would furnish the Fire Department with the plans, which the department would study and give its stamp of approval – or not. The department’s observations were mandatory on the architect and were incorporated into the terms of the building permit issued subsequently.

Now, under the new regulations, it is the architect/civil engineer who is responsible for carrying out the fire safety study. All such architects must be certified by Etek. And as in the past, the study is still sent on to the Fire Department for review.

Hadjivasileiou thinks this is a positive change, putting additional pressure on architects and engineers to comply with fire safety standards.

Moreover, where necessary the Fire Protection Code of Practice may now be tweaked or amended by ministerial decree, making the system more flexible.

Asked about requirements for such things as wet risers and sprinklers in high-rise buildings, the officer said these are already extant.

Even under current practice, said Hadjivasileiou, wet risers are installed in buildings that are over 30 metres tall.

The hoses used by the department’s fire-fighting platforms are 30 metres long but can be extended beyond that. However, anything beyond that length poses a problem of adequate pressure from the pumps – hence the need for wet risers in the buildings.

Also, current practice in Cyprus provides for an extra stairwell in office buildings (but not for residential blocks) that are six storeys and above.

Occupancy is the chief criterion for an additional staircase. Office blocks are designated as high-occupancy, hence the requirement for an extra escape route.

Asked whether a major building fire in Cyprus has ever been attributed to unsuitable or faulty construction materials, Hadjivasileiou said he could not recall such a case.

On this point, the interior ministry said Cyprus is in line with EU Regulation No 305/2011 laying down harmonised conditions for the marketing of construction products.

In order for construction materials to be made available in the European market, they must comply with EU standards, be accompanied by a Declaration of Performance and bear the CE marking.

Eleni Mavrou, chair of the House interior committee which reviewed the new regulations, said their preparation had nothing to do with the terrible events in London.

“But when the tragedy did happen, just two days after we finished discussing our regulations here, I thought to myself: ‘You never know what happens…better safe than sorry’.”

As to whether cladding is used in Cyprus, Mavrou said that from a cursory investigation into the matter it does not appear that such materials are used in buildings here.

But a major limitation of the updated fire safety regulations is that they do not apply to already existing buildings or those under construction and for which a building permit has been issued.

The only exception is that, where restoration work is to be done on existing buildings, the updated regulations apply.

Asked why the omission, Mavrou hinted only that it was due to legal complications.

She conceded this might be an issue, for instance, with the series of skyscrapers now being built in Limassol. The permits for these high-rises were issued under the old regulations.

But the fire department’s Hadjivasileiou insisted that in practice this is no cause for concern.

“Again, our previous regulations and standards were robust. Everything was already in place to ensure the best possible fire safety,” he offered.