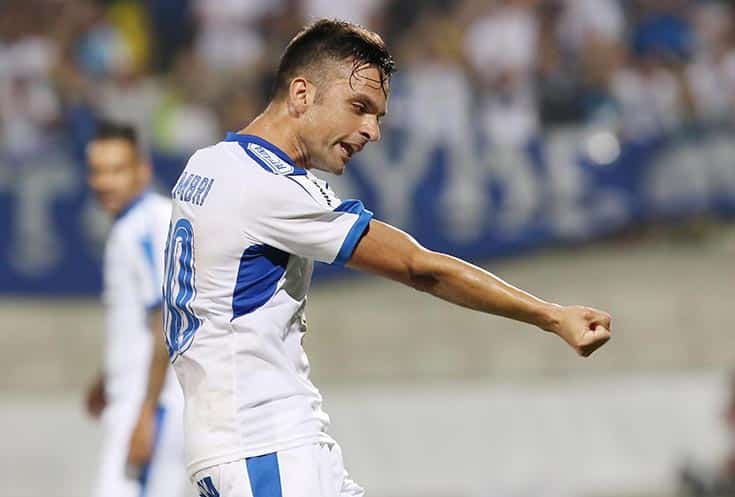 Andre Skembri celebrates after scoring the first goal for Apollon

Apollon join AEK in the playoff round of the Europa League following a 2-0 win over Aberdeen on Thursday night in Larnaca which sees the Limassol club go through 3-2 on aggregate.

Ahead of the game, the Cypriot club called on their fans to turn the heat up on their rivals, and they duly delivered as a sellout crowd at the AEK Arena helped their side to a big win.

It took just 17 minutes to get their reward. A powerfully whipped-in cross from the left by Jander was not dealt with by the Aberdeen defence. Anton Maglica then laid the ball off to Andre Schembri who lashed home through a host of defenders for the highly-craved breakthrough.

The tie was still finely balanced throughout, as an away goal for Aberdeen meant that Apollon would have to get another. Ryan Christie, who opened the scoring last week in Scotland, sent out a warning sign shortly after with a long-range free-kick that forced Bruno Vale into a good stop.

It was a nervy second period for the hosts, as Christie and Gary Mackay-Steven came close, before a late header from substitute Nicky Maynard was blocked on its way to the bottom corner.

But with the visitors throwing numbers forward in pursuit of a leveller, Apollon capitalised with a quick counter-attack. Aberdeen keeper Joe Lewis made a fantastic save to initially deny Maglica but the rebound was volleyed in by Emilio Zelaya.

Aberdeen continued to push as an away goal would have forced extra-time. Suspense carried through until the very last minute but Apollon held on for a historic win which puts them within touching distance of the Europa League groups.

Apollon and AEK will find out their playoff opponents in today’s draw, shortly after it is revealed who Apoel will be facing in the Champions League.

Results from the Uefa Europa League Qualifying Round 3 second leg matches on Thursday: