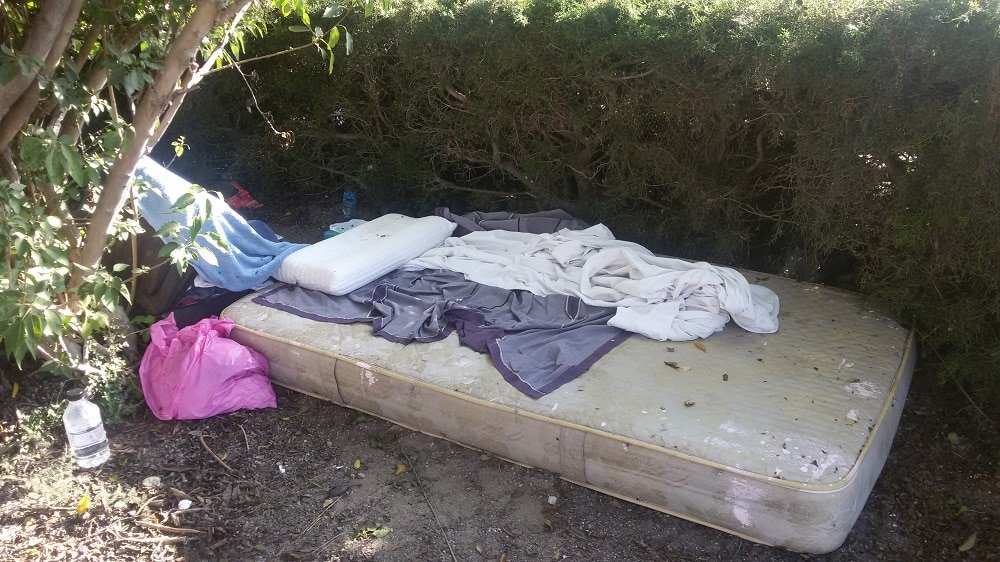 Where Stephan sleeps rough in the park

A CONCERNED Paphos resident has stepped in to help a homeless Bulgarian man whose mobile telephone, passport, ID and other items were stolen whilst sleeping rough in a park in central Paphos, after his boss failed to pay him his last wage packet.

Only wanting to be referred to as Nadia, the office worker told the Sunday Mail that she is trying to raise 400 euros to help ‘Stephan’ – not his real name – to get back on his feet.

Stephan was forced to quit his rented apartment six weeks ago, when his then employer failed to hand over wages that he owed him.

Shy and polite, the 36-year-old speaks Bulgarian, Greek and Turkish and moved to Paphos three years ago in search of a better life, as work in his Bulgarian hometown is scarce. Acquaintances had told him that work as a casual labourer in Cyprus was available, and, until recently, he worked on a number of building sites and car washes at petrol stations.

However, his most recent boss, a Pontian businessman working in building and construction in Paphos, failed to pay him his last wages, despite repeatedly informing him he would bring him the cash. Stephan was earning around 40 euros a day on the construction sites. He has no bank account and was always paid in cash.

Nadia noticed Stephan sleeping rough in Dasoudi Park in the centre of Paphos whilst walking her dogs. After speaking to him, she realised that, like her, he was from Bulgaria.

“His story is very sad and he has no-one to help him sort out his troubles, so I decided that I would take on that role, I believe that I was supposed to help him,” she told the Sunday Mail.

Nadia’s husband has spoken to Stephan’s ex-boss on the phone and he has repeatedly lied, saying he will bring the amount owed Stephan, but has failed to do so for weeks.

Stephan has also lodged a complaint with the relevant government office in Paphos, who contacted the employer, but as yet, no money has been received.

“He is unbelievable, he lies about paying Stephan, even to the government,” she said.

The employer has also reportedly threatened Stephan with violence, which was reported to Paphos police who said they were unable to take any action.

Stephan needs about 400 euros, Nadia says. This would cover his travel to Nicosia to the Bulgarian embassy, accompanied by two witnesses that know him well, to complete the necessary paperwork to obtain a temporary passport. The rest would cover one month’s rent.

Nadia explained that the temporary passport, which will only be valid for three months, is imperative for him to secure work and then earn enough money to get his regular passport from the Bulgarian embassy.

“No-one will employ him without any ID,” she explained. “With the temporary ID, he will then be able to work and earn enough to go and fix his regular papers.”

Sitting on a park bench, with a group of alcohol dependent men nearby, it is clear that Stephan is a victim of circumstance. He is adamant, though not judgemental, that he is not like them. He is spotlessly clean, speaks in a quiet and respectful manner and said that he always clears away his rubbish.

Nadia explains that he goes to different people’s houses to take showers, including friends of hers.

“He is embarrassed to go to other people’s houses but it is very important to him to remain clean,” she said.

Stephan sleeps in the open air of the park on an old mattress, with a sheet to cover him and a couple of carrier bags stuffed with a few possessions placed next to him on the dirt. He tells me that he is ashamed of his current situation and longs for a job and a small place to call home.

“Everything I had was stolen more than one month ago. I have some friends but no-one close and without Nadia and her husband I would be lost. They are angels, they don’t know me and they care about me so much, I am very grateful to them.”

In addition, Stephan wants to thank residents close to the park who realised he was homeless and bring him food and drink. “Apart from my situation, I like Cyprus very much,” he said.

Nadia said that the park is now a dangerous place at night and recently a number of incidents have happened here; there are also people drinking and taking drugs, she said.

Just before Stephan had to leave his apartment, he met a woman he likes very much. They do not know each other well and he doesn’t want her to be aware of his situation until he is back on his feet with a job and somewhere to live.

“If this works out, when I realise her character and how to tell her and not lose her respect, then I will,” he said.

Nadia has visited the social welfare department of Paphos municipality for help, and they arranged for Stephan to receive a hot, cooked daily meal at a centre in Moutallos. They will also help with furniture and other items he may need once he finds somewhere to live, she said.

“A woman named Andri who works there has been very helpful, unlike some of the other government departments who have not.”

Nadia also approached the Greek Orthodox Church on behalf of Stephan; they gave her 20 euros.

As if Stephan’s life was not bad enough already, a few days ago he was involved in a car accident.

An acquaintance had picked Stephan up to take him to his home in Anarita for a shower and had a lucky escape when the car was involved in a bad road traffic accident. He suffered only cuts and bruises, but is in a lot of pain, said Nadia.

“He could be dead, it was very bad. This is not the best period of his life,” she said. “How could I not help him when I knew of his situation? This could happen to any of us.”

How did your garden grow?