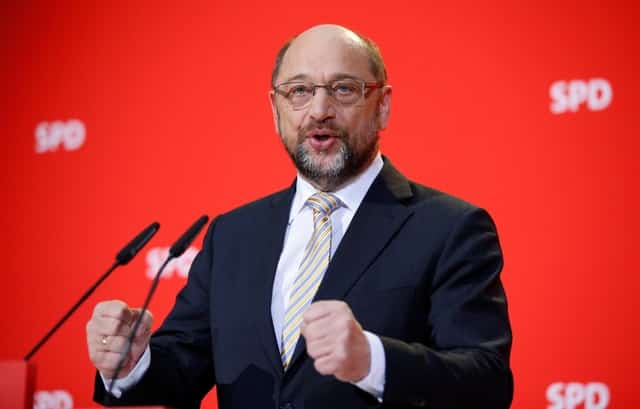 The leader of Germany’s Social Democrats (SPD) said on Monday he would launch talks with Chancellor Angela Merkel’s conservatives on forming a government next week if members of his centre-left party gave him the green light at a congress this weekend.

The remarks by Martin Schulz raise hopes that the two parties that suffered losses to the far right in an election in September could renew an alliance that has ruled Germany since 2013 and end the political deadlock in Europe’s largest economy.

Merkel turned to the SPD after failing to form a three-way alliance with the left-leaning Greens and the pro-business Free Democrats, plunging Germany into a political impasse and raising doubt about her future after 12 years in power.

“We’ll explore whether and how the formation of a government is possible in Germany,” Schulz told journalists.

The SPD party board leadership had earlier set down its key demands for coalition talks with the conservatives.

On the highly divisive issue of immigration, one of the main reasons for the collapse of Merkel’s first effort, the SPD said it opposed a conservative plan to extend a ban on the right to family reunions for some asylum seekers.

“Family reunions and family cohabitation lead to good integration,” the SPD document said. “That’s why we are against extending the suspension of family reunions.”

Merkel could also face complications from her own camp.

Her arch-conservative CSU allies in Bavaria on Monday named right-winger Markus Soeder to be their candidate for the state premiership in a regional election next autumn, potentially weakening her hand as she negotiates with the SPD.

Merkel’s Christian Democrats (CDU) and the Christian Social Union (CSU) bled support to the AfD in September’s federal election because of anger at the chancellor’s decision in 2015 to open Germany’s door to more than a million asylum seekers, and the CSU now fears losing more votes at regional level.

The future of current Bavarian premier Horst Seehofer had been in question since the election. After the losses, Merkel reluctantly accepted a CSU demand to put a limit on the number of asylum seekers Germany will accept each year.

Asked why he was clearing the stage for Soeder to lead the CSU in next year’s vote in Bavaria, Seehofer said: “The past doesn’t win you any elections.”

Soeder, who has accused Merkel of pulling the conservatives to the left and took a hard line on Greece during the euro zone crisis, is likely to be a bigger thorn in Merkel’s side than Seehofer, who is expected to remain party leader.

For its part, the SPD, which has governed in coalition under Merkel since 2013, suffered its worst election result in postwar history and had been reluctant to join another “grand coalition”.

It dropped its pledge to go into opposition only after Merkel failed to form a government, bowing to pressure from President Frank-Walter Steinmeier to unwind the impasse.

The SPD will hold a party congress in Berlin this weekend, where it is expected to debate its position on coalition talks.

The SPD did not stake out a position on the conservatives’ upper limit on refugees in its policy document.

But it did say Germany should work with French President Emmanuel Macron on strengthening the European project through policies geared to fight high youth unemployment.

It did not mention key proposals by Macron that the euro zone should have its own budget and finance minister, but it did mention his plan for closer defence cooperation.

On the economy, the SPD’s proposals for more rights for workers and employee-friendly regulation of the large temporary work sector could draw fire from the CSU.

The long political impasse is starting to worry investors. An investor sentiment survey tracking Germany fell in December. The research group Sentix said investors wanted to know how expensive a tie-up with the SPD would be.

EAC wants another €45 million for this year