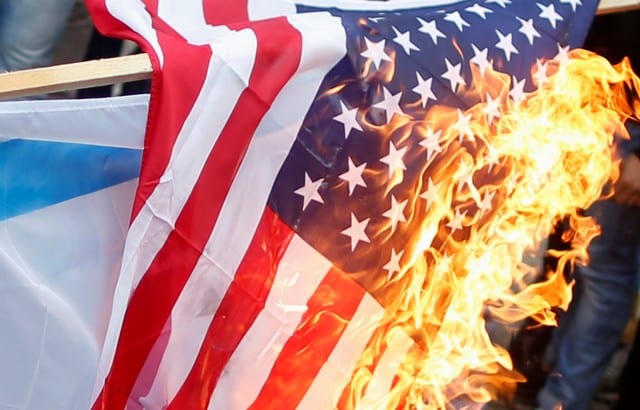 Palestinians burn an Israeli and a US flag during a protest against the US intention to move its embassy to Jerusalem and to recognise the city of Jerusalem as the capital of Israel, in Gaza City

The final status of Jerusalem, the holy city of the three monotheistic faiths, must be determined through negotiations in the framework of the Middle East peace process, the foreign ministry said on Thursday.
The statement comes a day after Washington announced it recognized Jerusalem as the capital of Israel, leading to concerns over a flare-up of tensions in the region.
In its statement, the foreign ministry noted that the Republic of Cyprus “aligns itself with yesterday evening’s statement by HR/VP Federica Mogherini, following US President Trump’s announcement concerning Jerusalem. Cyprus shares HR/VP Mogherini’s concern on how this development will be perceived in the region.”
The ministry said also that “the Republic of Cyprus underlines the need for restraint and calm and expresses the hope for commencement of negotiations,” adding that full respect of UN Security Council resolutions remains Cyprus’ firm position.
In the meantime, the foreign ministry has issued an advisory for Cypriots planning to travel to Jerusalem or the West Bank.
Because of large-scale demonstrations by Palestinians in the West Bank (including Ramallah and Bethlehem) and in the old city of Jerusalem, the government is advising anyone planning to travel there to exercise caution and comply with any security guidance from local authorities.
The Representative Office of Cyprus in Ramallah has temporarily suspended its operation.
In the event of an emergency and/or need for consular assistance, Cypriot citizens may contact the Cypriot embassy in Tel Aviv, as well as the foreign ministry.
Contact details
Embassy of the Republic of Cyprus in the state of Israel
Chancery:
61, Dizengoff street
Top Tower 14th floor
Tel Aviv 6433233
Israel
Tel.: + 972 3 92 730 00, + 357 22 65 1080 (direct from Cyprus)
Fax: + 972 3 62 90 535
Foreign ministry duty officer(outside office hours)
Tel:+35799660129
Email:: [email protected]
Foreign ministry crisis management department
Tel: +35722801000, +35797775998
Email: [email protected]