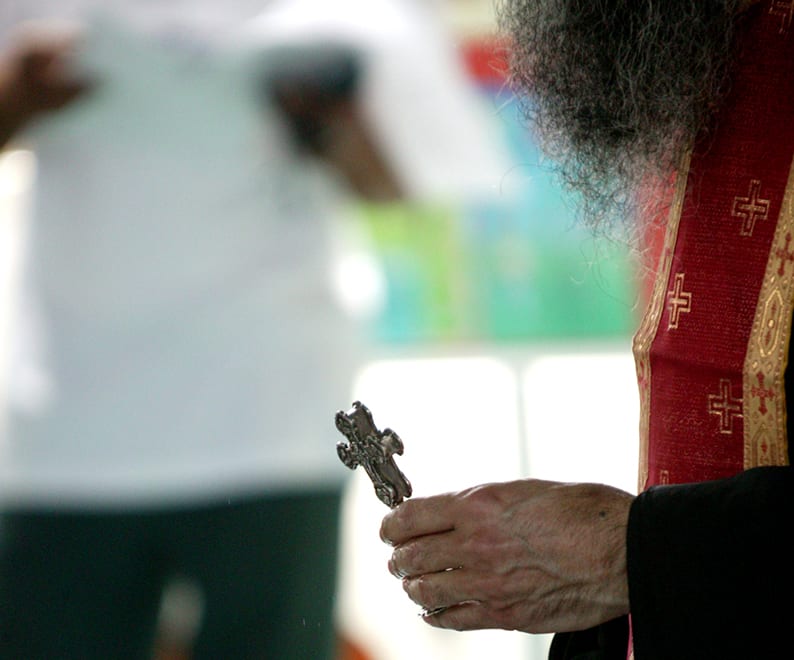 A priest who served time in prison for sexually harassing his foster daughter, Elena Frantzi, defended himself on Wednesday following a huge onslaught of disgust after the young woman was found dead in her home last week.

The priest, identified as Father Stylianos, said in a radio interview that what has happened is a test from God, and that he was being crucified in his innocence.

Frantzi, 29 had been under the wing of the priest and his wife between the ages of 4 to 10 in their home in Ergates village, Nicosia.

Details that have emerged since her death show that she had reported that her foster father had raped her and her foster mother had physically abused her.

The first time, at the age of 10, the social worker had ignored her but around 10 years later, after speaking to a psychologist, she formally reported the incident to police.

The priest, Father Stylianos was eventually found guilty of sexual harassment but not rape – and served 18 months in prison.

He was subsequently released and reinstated as priest -much to the public’s horror – carrying out his duties at a monastery for women.

In 2014, Supreme Court judge Nathanail, who examined the priest’s appeal, refused to reduce the sentence but also went on to say “he couldn’t not criticize” the fact that the priest’s wife was never prosecuted nor were there any consequences against the social worker that had been on the case.

The physical abuse carried out by the foster mother was akin to torture, the judge said.

Social services were not immediately available for comment to say if there had ever been any internal investigations for the worker in question, if there were any consequences and if the employee still works in the department.

Frantzi was found dead in her Tseri home on Thursday, police said.

In an interview with journalist Panayiotis Dimopoulos, Father Stylianos said “his ordeal” was a test from God and he “feels love for everyone” even those who have called him hurling abuse at him.

“I have been crucified” he said with his back to the camera without showing his face but “when you’re innocent, you take whatever charge comes at you, just like that. It’s a test.”

If he was guilty, he would have found the public to be right but they never took a chance to hear his side, Father Stylianos added. Instead, they only paid attention to the court decision.

Quoting the Bible, he said it was a case of seeing a splinter in someone’s eye but being blind to the log in their own eye.

“They can’t see their own evil,” and as such were pouncing on him.

Nonetheless, he said he still loved them.

God was the only one who could judge us all, he went on to say.

Father Stylianos said he continued to carry out his holy work even in prison, helping many inmates who apparently supported him. He never faced any abuse while behind bars and thanked “inmates and officials for the love and respect they had towards me.”

Commenting on Frantzi, he said she, himself and God were the only ones that knew the whole truth.

Nonetheless, he said he forgave her from the very beginning.

He never reached out to her after finding out about the charges she filed against him because “there weren’t mobile phones then like now,” even though it was less than 10 years ago, he said.

He did not attend her funeral so as not to cause any upset but included her name in his church prayers, the priest said during the interview.

In his defence, he cited another two foster daughters he has – one of whom lived in the same room as Frantzi when she was in their home – who are now adults and are still close to him.

One of them has spoken to the media, saying the slurs against her foster father are a lie.

Father Stylianos spent much of the same in the interview alleging that years ago, someone threatened to try and have him defrocked.

“This person was then found to be with Elena (Frantzi) posing as her friend.”

He said she was encouraged – his daughter went as far as saying Frantzi may have been bribed – to hurl accusations at the priest.

If he could go back in time, Father Stylianos would still take her back “with love.”

Details of the sexual abuse – which he denies – and were read out in court made for sickening reading, describing the acts he made Frantzi carry out when her foster sister was asleep in the same room.

Her psychologist, who testified said she suffered trauma from the events but specified the young woman was of sound mind and nothing was a figment of her imagination.

Frantzi had also told a friend that some of the acts had taken place in church.

The young woman’s cousin has called for a mass protest in the capital, through a video on a Facebook page titled ‘Cypriots against paedophiles.’ Details have not been announced.