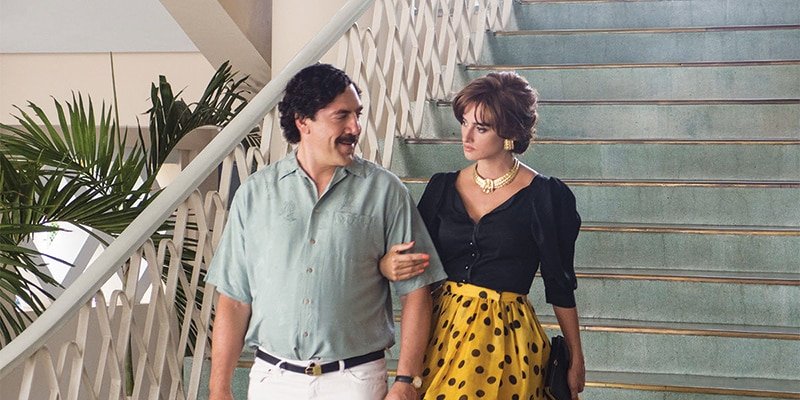 Beware the curse of the gerund. With just a couple of exceptions (Roger Avary’s Killing Zoe comes to mind), two- and three-word titles where the first word ends in -ing are a red flag, indicating movies which are usually as waffly and unfocused as their titles: Taking Woodstock, Surviving Picasso, Saving Mr. Banks, Wrestling Ernest Hemingway… It’s even worse if the second word is a proper noun – yet Loving Pablo, starring Javier Bardem as drug kingpin Pablo Escobar, works hard to lift that curse, even if it’s not altogether successful. (The week’s other new release, Spinning Man, is exempt altogether, since the -ing word in that case is being used as an adjective rather than a gerund. This is why I get the big bucks, because I can make these fine cinematic distinctions.) Pablo is often enjoyable – yet it’s still a bit of a gerund, at the end of the day.

The story of Pablo Escobar is well-known of course, maybe too well-known: head of the Medellin cartel which, in the 80s, gave that city the highest murder rate in the world; purveyor of tons upon tons of cocaine to the US market; victim of his own success, once again proving the maxim that those who live by the sword die by the sword. Loving Pablo’s main innovation is telling that story through the eyes of Virginia Vallejo (Penelope Cruz), a Colombian TV diva who had an extended affair with the (married) drug trafficker, and years later told all in a book irresistibly titled Loving Pablo, Hating Escobar.

What this film seems perpetually on the point of saying, without ever quite saying – presumably to keep the audience on board, or because the lady in question is still alive – is that Ms Vallejo is a shallow and impressionable bimbo. Her voice-over (possibly derived from her book) drives the movie, offering one hilarious gem after another: “I’ve had to leave a house in the middle of the night because of a man before – but this is the first time I’ve had to leave a country!” goes the opening line, spoken as Virginia is being smuggled to America by the DEA. She’s seduced by Pablo’s low-born animal energy (what we see of his lovemaking seems appropriately brutish). She giggles at the thought of doing “illegal things” with her new lover, and quivers with excitement when he fills a suitcase with cash and orders her to go shopping and not come back till she’s spent every cent. “That day I decided that I didn’t care how Pablo makes his money,” she’s already resolved, laying out the dilemma at the heart of the movie, “only how he uses it”.

The tale of a superficial woman who lived in denial (and apparently continues to do so, separating the feared ‘Escobar’ from her beloved ‘Pablo’) might’ve made for a fascinating movie; this, for whatever reason, is not that movie. The central relationship actually becomes rather sidelined, eclipsed by Pablo’s rise and blighted by his fall. He and Virginia grow apart, barring occasional reunions like a thoroughly weird, out-of-nowhere scene where he gives her a gun as a present, regaling her with a detailed description of what his enemies will do to her – not just rape her, but also insert “blenders and hairdryers in your vagina” and leave her to die! – unless she’s able to defend herself. Is he showing off? Trying to freak her out? Does he resent her relative innocence, or fear her betrayal? Any of these could be true – but the answer is we don’t know, because the relationship is too vague.

Loving Pablo keeps the loving mostly as a gimmick, focusing instead on the juicy (if familiar) subject of Escobar’s Scarface-like exploits. Here he is, pondering a problem with his hooded eyes and cruel, jagged visage (“That can be fixed,” he purrs, and you know what kind of fix he has in mind.) Here he is, howling like a dog – “Hijos de pu-u-u-u-uta!!!” – as he plots revenge. Here he is, memorably, fleeing naked through the jungle with helicopters in pursuit. Here are the murders, and increasingly hysterical tone. By the end he’s pacing furiously, spitting out wild threats on the phone while Virginia listens shell-shocked, with a fashion magazine in her hand.

The film doesn’t glorify per se, Bardem – with pot belly – making Escobar deeply unattractive (at one point he even sleeps with little girls, another detail that seems to come out of nowhere), yet he has a certain magnetism. Virginia, too, is smarter than she looks, proving herself quite shrewd in her DEA dealings; maybe the whole bimbo thing is just a façade, a ruse to ensure she’s underestimated. There’s a more intriguing film behind this solid big-screen Narcos, a film about a girl who may (or may not) have lost her head to a powerful gangster, and the gangster who may (or may not) be in love with her. And what of this film, the one we’re actually dealing with? Well, it’s better than its title.